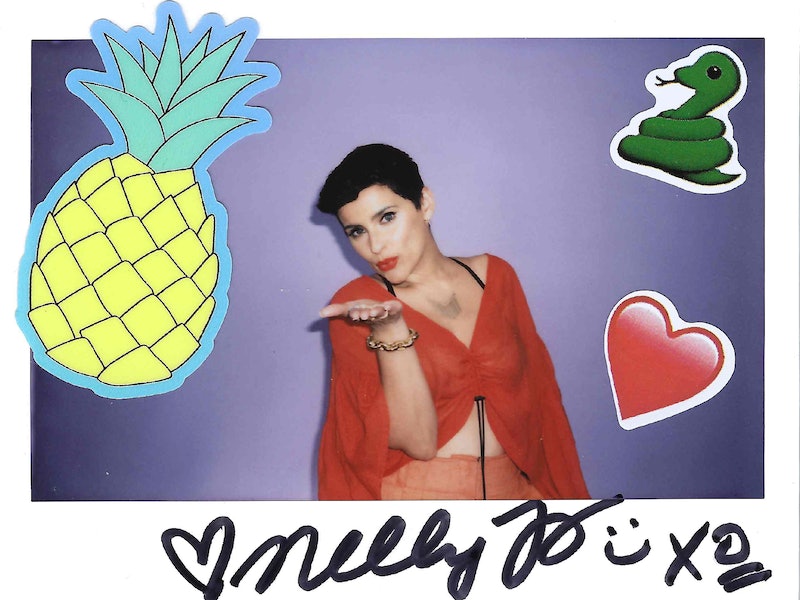 When celebrities come into Bustle HQ in New York, whether it's for a photoshoot, videoshoot, or a Facebook Live, we want to give them the chance to leave their mark. Literally. So we hand them a pen, a piece of paper, a few questions, and ask them to get creative. The rest is up to them. This time, singer/songwriter and Grammy-winner Nelly Furtado is leaving her mark in the Bustle Booth.

If you owned an iPod back in 2006, there’s a strong chance that “Promiscuous,” the Timbaland-assisted pop song that helped Furtado’s third studio album become one of the best-selling records of that year, was on at least one of your playlists. A few other hits — "Maneater," "Say It Right," "All Good Things (Come To An End)" — proved that Loose was a career-defining album for the Canadian pop singer, tremendously shifting her image.

Ten years and a short hiatus later, her 2017 to-do list is already jam-packed, as she recently released her sixth album, The Ride, back in March. In the midst of it all, Furtado was kind enough to stop by Bustle’s HQ to share a few details about herself, including her go-to coffee order and her opinion on millennials.

More like this
Hannah Khalique-Brown Has Her Sights Set On 'Strictly'
By Frances Stewart
Who Is Betty Who Dating? The Australian Singer Is Married To Her Tour Photographer
By Radhika Menon
You Might Want To Rewatch 'Elvis' For This Britney Spears Easter Egg
By Grace Wehniainen
Sadie Sink Would Escape Vecna From 'Stranger Things' With This Taylor Swift Song
By Grace Wehniainen
Get Even More From Bustle — Sign Up For The Newsletter