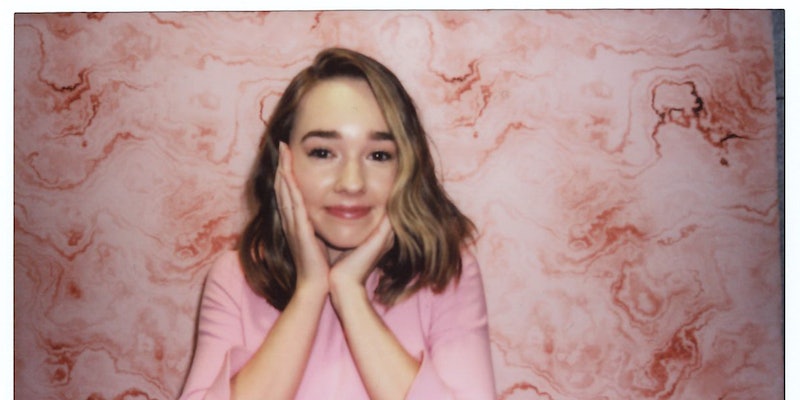 When celebrities hang out with Bustle editors, we want to give them the chance to leave their mark. Literally. So we hand them a pen, a piece of paper, a few questions, and ask them to get creative. The rest is up to them. This time, The Americans star Holly Taylor is leaving her mark in the Bustle Booth.

Any average teenager dreads walking into class and being greeted with a pop quiz. But since she plays the Jennings' daughter Paige on FX's '80s spy drama The Americans, Holly Taylor's biggest fear lately is walking into an interview and being quizzed about the Cold War — an era that the 20-year-old Taylor gets paid to pretend to live in, but wasn't actually alive for. "I'm always afraid someone's going to ask me, 'Define the Kremlin,' or something," Taylor says.

Perhaps it's because she literally grew up on The Americans set that Taylor sometimes defaults to feeling like a student answering questions from adults. Taylor was 13 and fresh off a two-year stint dancing in Billy Elliot on Broadway when she landed the role of Paige in The Americans' first season, which debuted in 2013. In the years since, viewers have watched both her and her character grow physically and emotionally on screen. Now, at the start of the show's sixth and final season, the inevitable has finally happened: Paige Jennings is no longer the precocious, religious girl who once thought the darkest thing her parents could be hiding from her was an affair. It's now 1987, a three-year time jump from the events of Season 5, and Paige is a college student who just so happens to do some light spy work for her parents (and therefore Mother Russia) on the side.

For Taylor, who's now a sophomore in college studying graphic design, depicting key moments in Paige’s coming of age on screen means that her personal maturation and her character's are inextricably intertwined. “Imagine having your boyfriend sit next to you while you make out with another boy,” Taylor says, cringing as she thinks back on the moment she watched her first ever on-screen kissing scene (between her and Paige’s first boyfriend Matthew in Season 4) with her real first boyfriend. Her mom, who’s accompanied her to Bustle’s offices, is quick to point out that hey, her parents were there too, and that was also weird. But it's all a part of the job, and the fact that Paige has become one of the most dynamic parts of The Americans is a testament to the trust the creators and writers put in Taylor to carry some of the series' most pivotal and emotional moments.

"I didn't want to let anyone down," Taylor says of filming some of Paige's biggest scenes, like the devastating one where, after months of trying to figure out what her parents are hiding, they finally tell Paige they're Russian spies. "Being a teenager and getting this meaty stuff where the character’s whole life is flipped around and you’re crying every day on set — it was really challenging, but I learned so much from doing it, and I'm just really grateful that they gave me the chance."

And Taylor is getting the chance to do even more as Paige this season. Though she says she's wanted Paige to join the family business and become a spy since late in Season 1, the actor never quite expected it to actually happen. Paige's rigorous self-defense training with her mother Elizabeth (Keri Russell) is continuing, which means that Taylor got to put her dance skills to use again in learning complicated fight choreography for her scenes. The physicality of them was fun, she says, but she's also keenly aware of the larger significance they hold.

"For two female characters to be fighting each other I think is so different than everything else that you see. It’s not like a dad teaching his son, or like two guys," Taylor says. "It’s a mom teaching her daughter how to physically defend herself, and that’s so unique and admirable and strong."

Those scenes of female strength are a microcosm of The Americans as a whole, which presents Elizabeth's steely reserve as the more fervently devoted spy of the Jennings elders and Paige's deep-rooted moral strength as simple facts. It's something Taylor says she'll sorely miss about playing Paige.

"Even now, every audition I get, the breakdown says like, 'Julie, 16, pretty, super smart, super popular,' and I’m like, that doesn’t tell me anything. Why can’t we just have like a normal girl who is a good person? Or has interesting personality traits? It’s difficult," she says. "It’s so hard to find a female character [like Paige who] wants to do good for the world and doesn’t just care about getting a boyfriend or being popular at school. I just hope that I can find another girl to play who is as passionate and strong as Paige is."

One of The Americans' strengths is in how it makes us empathize with characters who often commit cold and brutal acts in the name of a cause whose trajectory they often don't ultimately have control over. But despite Paige betraying the country she calls home and witnessing some pretty gruesome things in the name of her spy work, Taylor says that Paige hasn't completely lost her moral conviction and idealistic streak — a relief, given they're the traits that have made her one of the show's most complex and sympathetic characters.

"Paige is still true to herself and hasn’t been fully corrupted, as you say," Taylor says, teasing me when I ask if Paige has fully gone to the dark side and lost her innocence. "She’ll still come back to her own opinions at the end of the day." It's good to hear, though Taylor is more tight-lipped about what happens in the series finale. "It’s a very The Americans ending. It’s just so appropriate for how the show pans out. I think that it’s really fitting," she says coyly. In the meantime, the drawings in her Bustle Booth of the three emojis that represent what's ahead on The Americans will have to suffice as clues.

More like this
In 'The White Lotus,' Leo Woodall Gets His Moment
By Gabrielle Bondi
At 14, Pauline Chalamet Fell In Love & Danced ‘The Nutcracker’
By Grace Wehniainen
Elizabeth Debicki On Her Approach To The Most Debated Scene From 'The Crown'
By Grace Wehniainen
'Shadow And Bone' Season 2 Pics Show Mal & Alina Starting A New Journey
By Bustle and Bustle UK
Get Even More From Bustle — Sign Up For The Newsletter