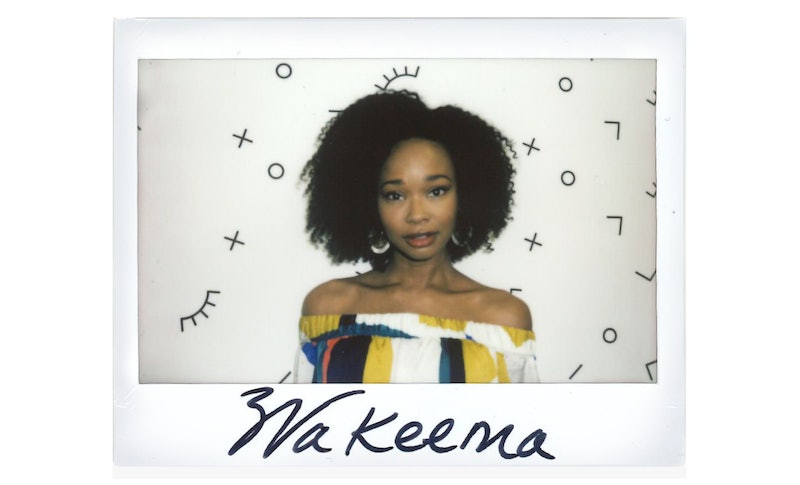 When celebrities hang out with Bustle writers, we want to give them the chance to leave their mark. Literally. So we hand them a pen, a piece of paper, a few questions, and ask them to get creative. The rest is up to them. This time, Dynasty and The Marvelous Mrs. Maisel star Wakeema Hollis is leaving her mark in the Bustle Booth.

It was the same week Wakeema Hollis found out she was cast as the wonderfully dramatic Monica Colby of Dynasty and the fantastically demure Harriet of Marvelous Mrs. Maisel. And what a day it was remembers the actress when she stopped by Bustle HQ in December. But if it seems like it was a stroke of luck or it came too easily, Hollis wants to make one thing clear: "Sometimes it takes a long time to make it look like it just happened overnight."

Landing not just one, but two recurring roles on hit TV shows is the culmination of hard work and determination, both of which Hollis has demonstrated throughout her life. It was a successful career in modeling after high school that she credits with getting her out of her hometown of Jackson, Tennessee. She got to see the world, explore different cultures, speak different languages. (She recommends going to Brazil, by the way.) Her decision to transition from modeling to acting was a difficult one, "Modeling was the only thing I knew ... it was really scary, but it was also what I wanted. It what I've always wanted. I couldn't not do it."

And as Hollis confesses, it's actually quite the ride. As Dynasty's Monica Colby she gets to exact sweet, sweet revenge in a killer wardrobe. As Harriet on Marvelous Mrs. Maisel she services black clientele from behind the B. Altman makeup counter. As Hollis remarks, the two roles "are like different worlds and hold different weight." But she admires them both for their strong female storylines.

Hollis' next project, a TV series remake of the classic '90s film First Wives Club, certainly shares in the same spirit of feminism. Although Hollis will be playing Melissa (one of the mistress, famously played by Sarah Jessica Parker in the original film), she admits playing the character everyone's supposed to hate is just a little bit fun. As she puts it, "what I love about acting is it mirrors life, even the parts of life we don't like to talk about or acknowledge."

With every new character, Hollis gives us a glimpse into a different world. Find out more about Hollis in her Bustle Booth below.

More like this
'Grey's Anatomy's New Intern Got Advice From Dr. Bailey Herself
By Grace Wehniainen
Lauren Lyle Is Keeping The Contents Of Karen Pirie’s Bum Bag A Mystery
By El Hunt
What’s New On Netflix: Ana De Armas’ 'Blonde' & A Nick Kroll Special
By Arya Roshanian
After The Bling Ring, Nick Prugo Was Embroiled In Another Scandal
By Arya Roshanian
Get Even More From Bustle — Sign Up For The Newsletter