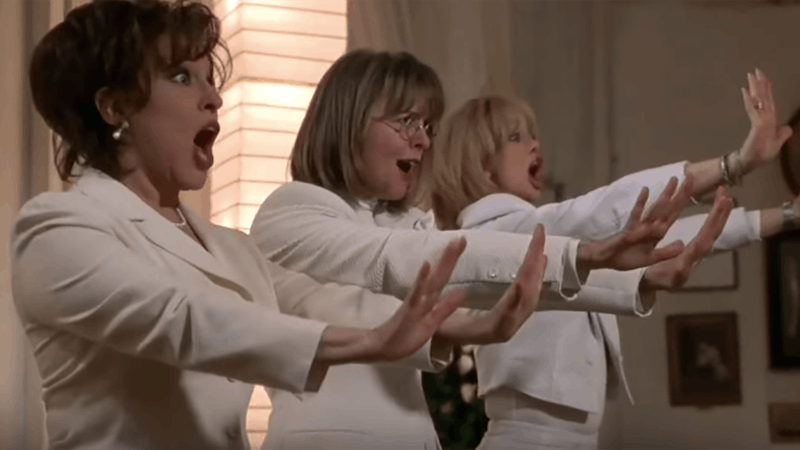 Get ready for a recreation of one of the '90s best movie musical moments, because there will be a fresh rendition of "You Don't Own Me" in The First Wives Club reboot. In Entertainment Weekly's new interview with the upcoming TV show's showrunner, writer Tracy Oliver promised the cast will put their own spin on the scene from the 1996 original which featured Bette Midler, Goldie Hawn, and Diane Keaton rocking out to Lesley Gore's iconic song. And that's not the only nod to the film that fans can expect. In fact, Oliver — who also wrote Girls Trip — told EW, "If you're a real fan of the movie, you'll catch every single reference in there."

The promise of Easter eggs is just one reason why BET's 2019 comedy should be on TV fans' radars. Oliver is taking her talent for writing compelling female friendships and combining it with a stellar cast that includes Jill Scott, Michelle Buteau, and Ryan Michelle Bathe as core characters Ari (Bathe), Bree (Buteau), and Hazel (Scott). The three women and college best friends will reunite as their marriages are falling apart and seek a bit of revenge on their husbands.

It's going to be interesting to see The First Wives Club's narrative updated for a modern TV audience, especially by Oliver, who has already created an unforgettable film about female friendships for this generation. However, it's also good to know that the TV show will pay homage to its film inspiration. The "You Don't Own Me" scene left a lasting impression on fans of the movie, including Ariana Grande, who recreated the scene for a performance of "Thank U, Next" on The Ellen Show in November.

The sheer amount of reboots on TV right now means that each new one is met with a bit of skepticism, but Oliver explained to EW why she believes The First Wives Club deserves a chance to thrive on the small screen. "I don’t think that all movies necessarily lend themselves to remakes and reboots and TV shows," the writer said in her interview. "But, at the core of this one, it was just all about women and women finding their voice and their place. That's something that's timeless and something we could definitely use in 2019."

Oliver definitely has a point, and the way she describes the series' central plot makes the show sound like a potentially exciting one. She revealed to EW that the series begins when singer Hazel finds herself at the center of a cheating scandal thanks to her husband. Her college BFFs Ari and Bree rally around their friend, but it's not long before they realize their marriages aren't on solid ground either. Like the women in the original, they decide to get mad and get even.

Reboots often work best if they're not beholden to their source material. And it certainly sounds like The First Wives Club will mix just the right amount of originality and nostalgia. Keeping the "You Don't Know Me" number is definitely one way to draw in fans, like Grande, but the potential for the reboot to reach a whole new generation is just as exciting.