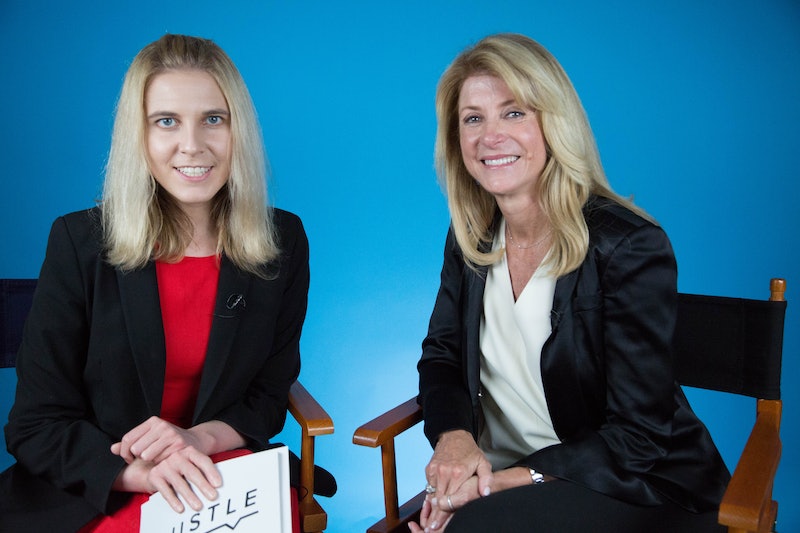 When celebrities come into Bustle HQ in New York, whether it's for a photoshoot, videoshoot, or a Facebook Live, we want to give them the chance to leave their mark. Literally. So we hand them a pen, a piece of paper, a few questions, and ask them to get creative. The rest is up to them. This time, activist, lawyer, and former Texas Senator Wendy Davis is leaving her mark in the Bustle Booth.

Even after leaving political office in 2015, Wendy Davis has continued to inspire women around the nation to stand up for feminism and further the cause in their every day lives. Perhaps she's best known for teaching an impossible-to-forget lesson in perseverance and what it truly means to never give up. On June 25, 2013, Davis filibustered an abortion bill on the Texas legislature's Senate floor for over 10 long hours. The piece of legislation banned abortions after the 20-week mark, required abortion facilities to meet the same strict standards as hospital operating rooms, and insisted that abortion doctors have admitting privileges at hospitals. Though Davis successfully stalled the bill, it eventually passed the following month in another special session. But the wave of activism her efforts sparked was unstoppable. Ultimately, the Supreme Court struck down the law as unconstitutional in 2016.

Yet for Davis, that never meant her job was done. She continues to fight for women's rights and provides concrete ways for others to follow suit. If you're interested in becoming involved in the community of change-makers she has brought together, you can sign up for the Deeds Not Words newsletter. And as a woman who brilliantly defines "stubbornness" as her greatest strength, I can't imagine a more determined, energizing leader to head this movement toward equality.