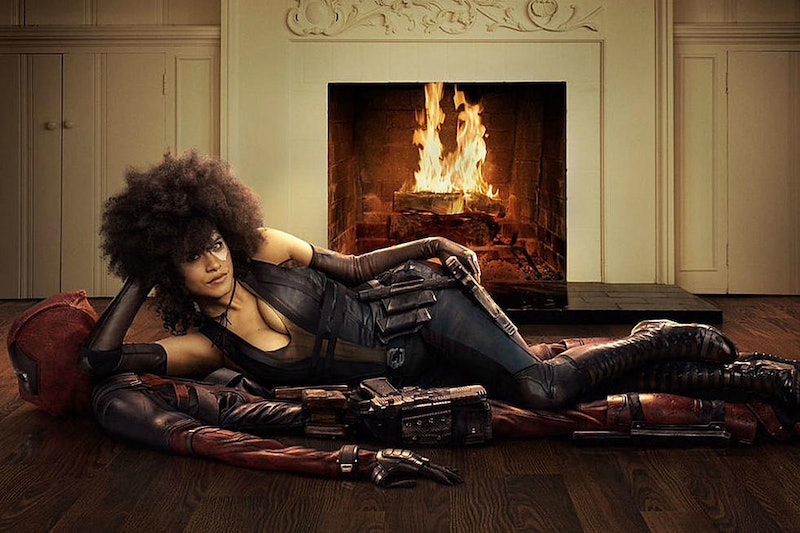 Deadpool 2's slew of new characters might be unfamiliar to film fans who don't follow the tangled web of Marvel comics. If you're someone who only knows Domino, for instance, as Deadpool's teammate in the May movie, don't fret — here's a brief primer about Domino in the Deadpool comics, and how the character lucked out crossing paths with Wade Wilson and joining the X-Force.

Deadpool 2 does a pretty good job of keeping Domino's essential character intact — she's an ace assassin with a sarcastic wit who isn't afraid to use either skill to destroy her foes. As Gamespot relays, she's a mutant whose power is that "she can subconsciously and psionically affect probabilities, make things work in her favor, and against others," i.e. she can manipulate luck to her advantage — though she has to be doing something that her unconscious mind can affect the chances of her succeeding at. That's why a mercenary life is a perfect fit for Domino; there's plenty of opportunity and action where she can sway the odds in her favor.

Deadpool 2 takes a hefty liberty having Deadpool create and recruit Domino for "his" X-Force team, as in the comics, Deadpool was one of X-Force's perpetual enemies, always getting in their way or sniping missions from under them. The X-Force of the comics were led by Cable (who also makes an appearance in the film as a mostly-enemy) and Domino was a team member from the start. In fact, Domino and Deadpool both made their first appearance in the Marvel universe at the same time; Deadpool's first comic appearance was as an assassin hired by Mr. Tolliver to kill Cable, and Domino's first appearance was to save the day by stabbing the heck out of Deadpool, killing him.

But, in typical comic-book soap opera plotting, that technically wasn't Domino's first appearance. The Domino that had been part of the X-Force from its formation turned out to be a shapeshifting mutant impersonating her, leading the X-Force to go on a search-and-rescue mission to save her from the tower of the same villain, Mr. Tolliver. Once again, though. Deadpool gets in their way. In the middle of the X-Force's escape attempt, the hero jumps in the fray and fights Cable while Domino (the real Domino) remains chained, helpless to do anything. An accidental sword swipe from Deadpool knocks open one of her manacles and frees her... whereupon she promptly shoots him. She and Cable escape, and Deadpool continued to pester the X-Force in comic issues to come.

If it weren't for Deadpool, Domino wouldn't be free, but he makes a career of getting in the way of X-Force's second-in-command across multiple comic series, and even multiple dimensions. To keep track of the Marvel universe's many alternate timelines, the comics took to numbering the different Earths, and on Earth-1036 Deadpool actually kills Domino and takes her eyepiece as gruesome souvenir.

When Ryan Reynolds first announced Domino's casting for Deadpool 2, comic fans were waiting to see how the film would tackle the characters' intertwining history. For a movie swiping at comic book conventions and attitudes, it seems natural, even inevitable, that Deadpool 2 would completely mess with expectations, and fans expected no less. So it's in perfect keeping with the comics' tone that the film would invert the relationship of both characters to have Deadpool not only lead but create the team he fought against in the comics, recruit Domino, and for the heroes to fight alongside each other to save a fellow mutant.

Domino's look also got an update for the film. Actor Zazie Beetz sports a large white mark around her left eye instead of the comic character's black one, and her armor's gotten a little more revealing sleeve-wise. Other than that, the movie keeps Domino's armed-to-the-hilt and ready to fight vibe front and center. Combined with her attitude remaining the same, even comics fans who might not recognize the storyline will have absolutely no trouble recognizing Domino's character in Deadpool 2.

More like this
The Biggest Differences Between 'Bullet Train' & The Book It’s Based On
By Arya Roshanian
'The Sandman’s Ending Is A Departure From Neil Gaiman’s Comic Book Series
By Kadin Burnett
'The Simpsons' Will *Finally* Address How They “Predict The Future”
By Sam Ramsden
The 'PLL: Original Sin' Creators Say A’s Identity Will Be “Very Clear” By The Season Finale
By Alyssa Lapid
Get Even More From Bustle — Sign Up For The Newsletter