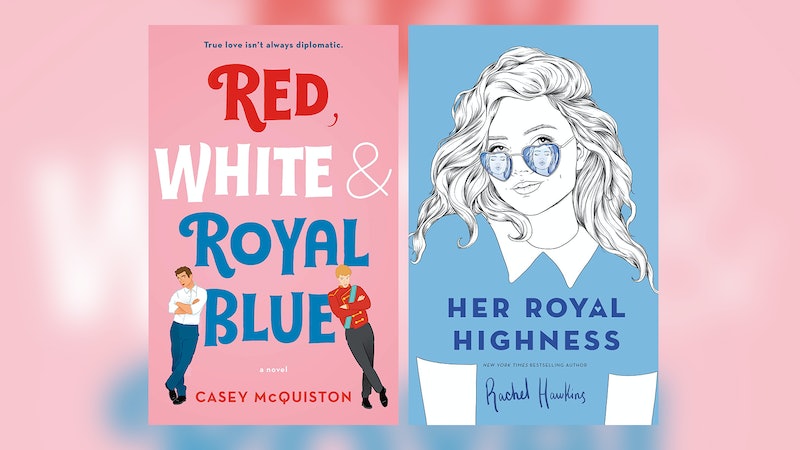 There is something so undeniably compelling about the pomp and circumstance (and, yes, the romance) of royalty, but it can be hard not to feel a bit burned out by the headlines at times. Between the marriage of Prince Harry and Meghan Markle last year and the birth of the couple's first child in May, unsubstantiated rumors of cheating spouses, brotherly rifts, sister-in-law rivalries, and spurned fathers have plagued both the Sussexes and Cambridges.

If you want to read a royal love story without the tabloid headlines, pick up Her Royal Highness by Rachel Hawkins or Red, White & Royal Blue by Casey McQuiston, two new romances that feature queer characters who get their fairytale endings.

Rachel Hawkins's Her Royal Highness is a spin-off of her young adult novel Prince Charming (originally titled Royals.) Set in the fictional world of Scottish royalty (for which Hawkins actually created an alternate history that spans four centuries), the book follows American exchange student Millie Quint as she embarks on her senior year at elite Scottish boarding school, Gregorstoun. She has no intention of making a romantic connection there, especially not after her sort-of-best-friend/sort-of-girlfriend back home broke her heart. But then she ends up with Princess Flora as a roommate.

At first, the two do not hit it off, and instead dive head-first into an animosity that includes at least one bar brawl. But as they get to know each other over mandatory chores, one disastrous night in the Scottish wilderness, and a makeshift American Thanksgiving, they begin to grow fond of one another. Yes, there is royal drama and lurking paparazzi and an overbearing Queen, but Hawkins subverts the tropes to make Her Royal Highness a relatable, heartwarming story about young love in all its beautiful complications.

Casey McQuiston also plays with the stereotypical royal romance story in her adult novel Red, White & Royal Blue, which follows Prince Henry of Wales and America's First Son, Alex Claremont-Diaz. Following a tabloid-fueled international scandal involving one of their public altercations, the sworn enemies are pushed by their families and publicists into a faux-friendship — which eventually leads to an unlikely romance. It's the ideal summer read, one that melds the hilarious crass-mouthed sarcasm of HBO's Veep with supremely steamy scenes.

McQuiston balances the levity of this novel with crucial commentary about the complicated public lives of the children of royals and politicians, many of whom face enormous pressure to act and present a certain way at all times. As Alex and Henry begin to comprehend the full scope of their feelings for each other, they must navigate not only the intense scrutiny of the press, but the well-oiled political, security, and publicity machines of the White House and the palace. They hide in stalls at a polo match, email each other from private accounts, sneak into locked rooms at diplomatic events, and attempt to grapple with their own burgeoning relationship and its implications upon their families and public personas.

Both Hawkins and McQuiston shake up readers' expectations about what the fairytale road to "happily ever after" looks like, but one thing remains certain: True love wins in the end.