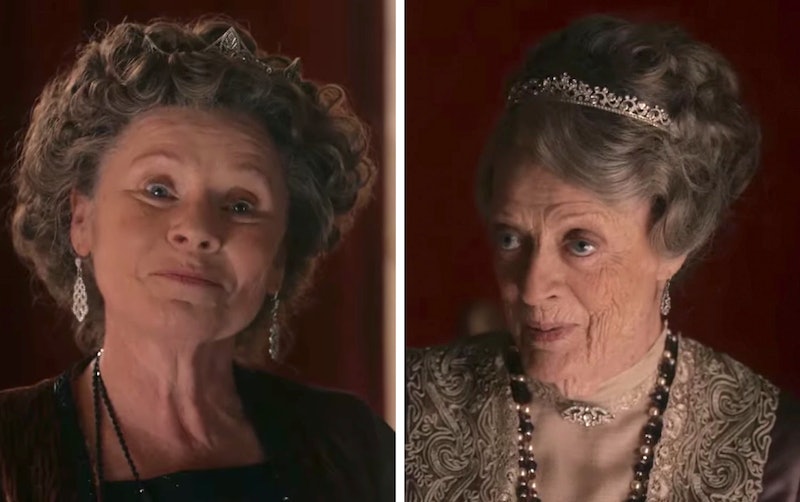 If there's one person you wouldn't want to cross, it's Violet Crawley — otherwise known as the Dowager Countess of Downton Abbey. But the fearsome great grandmother appears to have met her match in a brand new clip from the upcoming Downton Abbey film.

Crawley checks up on Bagshaw, reminding her about their forthcoming "little chat", only to be told that the pair will "have it out once and for all." It's not clear what they're disputing, but expect one of the best confrontations in period drama history.

The Downton Abbey film, releasing on Sep. 13, will feature all of the original cast. Set in 1927, it hones in on a visit by the then King and Queen, King George V and Queen Mary. According to the synopsis, this royal appearance "will unleash scandal, romance, and intrigue that will leave the future of Downton hanging in the balance."

Almost four years has passed since UK audiences last caught up with the Crawley family and their household employees. But, in the film, it has only been just over a year, reports Parade. Lady Mary (Michelle Dockery) is now running the estate alongside former chauffeur Tom Branson (Allen Leech), taking the reins from her parents, played by Hugh Bonneville and Elizabeth McGovern.

Getting such a big group of actors back together is an achievement in itself. But, according to the film's executive producer Gareth Neame, Smith was the last person to agree. As Parade reports, the 84-year-old once said she believed any future film would begin with her funeral. But she eventually signed up. Neame told the magazine: “I suspect, in a lot of ways, Maggie missed working with the other actors. When she was completely sure everyone was going to do it and it was happening, then she was on board."

If you're wondering whether Smith is anything like her on-screen persona, the answer is yes and no. Two Downton Abbey stars, Dockery and Laura Carmichael (who plays Lady Edith), admitted that Smith is incredibly funny — just like Violet. But she doesn't seem to be intimidating like the Dowager.

The pair told Parade that Smith is instead an unexpected fan of cat memes. “I had a file called ‘Pictures for Maggie’ of various cats on the internet doing silly things to make her laugh," Carmichael said. “She’s a legend, so the fact that she is also a funny pal who told us naughty jokes is great.”

This may not be the last time fans get a glimpse of Violet. In an interview with the Mirror, Bonneville hinted at a film sequel. “When we started filming, I thought this is going to be a nice full stop,” he said. “But there is such an appetite for it, I can see it carrying on. I’d never say never!”