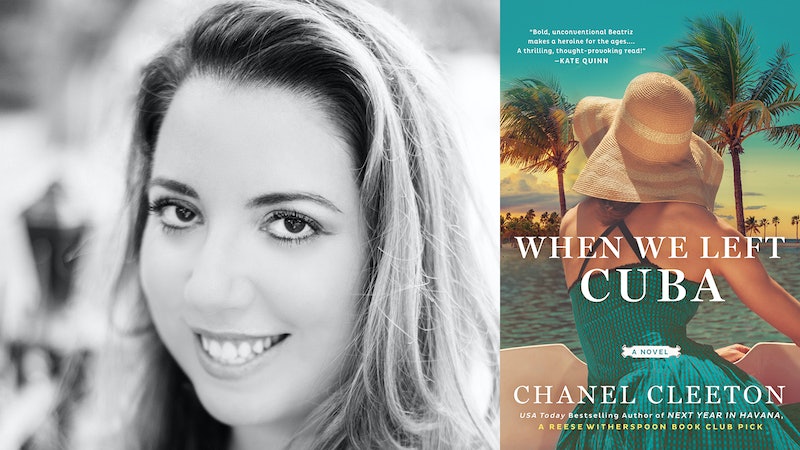 Chanel Cleeton, courtesy of author
By Virginia Isaad
May 23, 2019

Author Chanel Cleeton was discussing her first book Next Year In Havana on a panel at the Miami Book Fair when she looked out at the audience and caught sight of her grandfather in tears. It was a particularly poignant experience, as 60 years ago, he lived through the Cuban Revolution, and many of his experiences inspired that book.

Next Year in Havana — a New York Times bestseller and a selection for Reese Witherspoon's book club — introduced readers to the Perez family, through the story of Elisa Perez and her affair with a revolutionary in Havana in the days before Fidel Castro rose to power. Though the novel is fiction, it was built on the foundation of the experiences of Cleeton's family during the Cuban Revolution.

"At their heart, these books are meant to honor those struggles."

"It was important to me to fictionalize the family, but also to make everything that happened in the books historically accurate and realistic," Cleeton tells Bustle. "Some of the events are quite dramatic, but are very much real struggles that people faced during these time periods, and at their heart, these books are meant to honor those struggles."

In her latest book, When We Left Cuba, she revisits the Perez family, this time through the story of Elisa’s sister, Beatriz, who has fled to Palm Beach, Florida with her family. In their homeland, before the revolution, she and her sisters enjoyed life in high society, a result of her father’s successful sugar plantation business.

The book is set in the year following Castro’s rise to power. Beatriz is caught between two worlds, and she is desperate to reclaim the life she had in Cuba. Known for her beauty — she has already denied five proposals of marriage at the start of the novel — Beatriz is recruited by the CIA to in the hopes that she can seduce Castro and assassinate him.

She blames the murder of her revolutionary twin brother on Castro, and, fueled by vengeance, she doesn’t hesitate to accept the difficult task. But an unexpected romance with Nick Preston, a high-powered U.S. senator, complicates her plans.

'When We Left Cuba' by Chanel Cleeton
Amazon

"Whatever ideas I had for the story were often shaped by Beatriz’s strong nature and her unwillingness to stand on the sidelines as world events unfolded around her," Cleeton says.

Oscillating between 1960, when Beatriz is 23 years old, and the events of November 26, 2016, the day after Fidel Castro’s death, the story is an epic journey about the life of a fiercely independent and passionate Cuban immigrant living on her own terms, societal and familial expectations be damned.

"She is unapologetically herself, and even when that causes problems in her life, it’s something I’ve always loved about her."

Whereas Elisa was inspired by Cleeton’s grandmother, Beatriz is a character that developed on her own and blazed her own trail, according to the author. "Beatriz goes against society’s expectations and lives life on her own terms," Cleeton says. "She is unapologetically herself, and even when that causes problems in her life, it’s something I’ve always loved about her."

Beatriz shuns the constraints of being a woman in the ‘60s, and hopes to attend college and live independently instead of getting married. "When we were younger, our mother instructed us to always have a smile on our faces when out in society, to be polite, to laugh at men’s jokes and flatter their vanity," Beatriz says. "She raised me to be soft and malleable in a time when she thought that would win me a husband. Now I am all sharp edges and steel, and I can’t imagine one of these American men wanting me for their wife, can’t possibly fathom why they would take on all that weighs me down if not for the superficiality of such a relationship — the realization that we have nothing in common, that we are little more strangers, an eventuality."

While Beatriz is entirely fictional, the novel is rooted in historical events the author's family lived through, like the Bay of Pigs, the Cuban Missile Crisis, and Kennedy’s assassination. "I wanted to honor the strength and courage of those who experienced it," Cleeton says. "It gave me a renewed perspective and appreciation for my own family."

Cleeton, a first-generation Cuban-American with degrees in international relations and global politics, as well as a law degree, found her calling in storytelling based on family experiences, and she recalls asking her grandfather what it was like in Cuba during the missile crisis. "He mentioned looking out into the harbor and seeing a vast amount of ships and being convinced that they were going to die," she says. "It was sobering to hear their stories and all that they sacrificed for our family."

Through Beatriz, Cleeton channels that rage and resentment felt by hundreds of thousands of Cubans who had to leave all they had ever known behind to start fresh in the United States.

"All of my books have been really personal to me, and this part of my identity has been really special to be able to explore and share with readers," Cleeton says. "My hope is that will see more of these books being published so we have a more robust and diverse sense of representation and we get many different Latinx experiences and stories and perspectives."