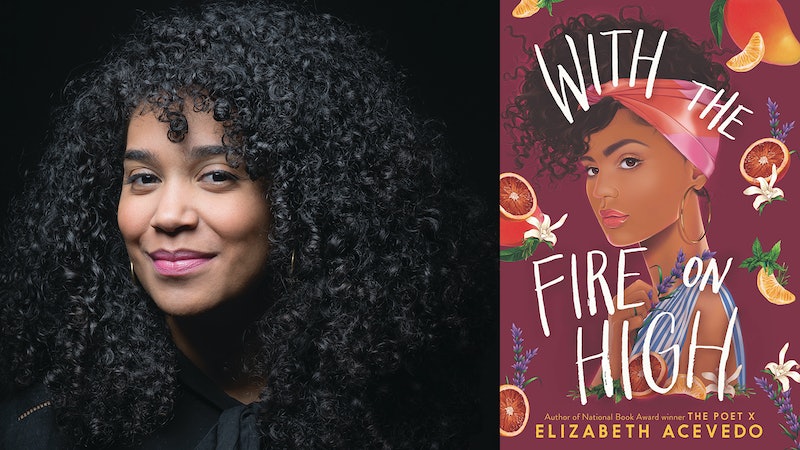 In With The Fire On High, Elizabeth Acevedo asks readers to look at the ingredients of a teenage life, and examine what they might be missing when they subscribe to stereotypes about teenagers of color and pregnant teens.

Acevedo’s name is one you’ve probably heard before. Her 2018 YA novel The Poet X earned a number of awards — including the National Book Award for Young People’s Literature and the Michael L. Printz Award — for its depiction of Xiomara, a young female slam poet in Harlem.

In With the Fire on High, Acevedo gives readers another strong-willed protagonist: North Philly teenage mom Emoni Santiago, who must figure out a way to pursue her passions while raising her daughter and attending school. When the stress of work, school, and shared parenthood threaten to be too much, Emoni finds her comfort in cooking. She dreams of a career as a professional chef.

"What are the rules of her life and what is the kind of womanhood that she's going to have to make for herself?"

"More with this story than with The Poet X, it is [about] a young woman who is trying to figure out the idea of 'not like that, like this,'" Acevedo tells Bustle. “What are the rules of her life and what is the kind of womanhood that she's going to have to make for herself? Because there is no set way to be the kind of girl that she wants to be."

The kitchen provides a space for Emoni to feel angry, happy, sad and everything in between without any judgment. But she is more than talented; she has magic running through her veins that infuses her food with warm memories. She recalls her first time cooking, when she was just four years old: "When ‘Buela tasted it ... she says it was the best thing she’d ever eaten. How it made her whole day better, sweeter. Says a memory of Puerto Rico she hadn’t thought about in years reached out like an island hammock and cradled her close … All I know is she cried into her plate that night."

'With The Fire On High' by Elizabeth Acevedo

Even in the moments when she doesn't fully believe in her magic, she keeps pushing. She is a layered, believable character who loses her patience — even with the people she loves — and breaks down when the stress of work, school, and parenthood becomes overwhelming. She is excited about the prospect of cooking professionally even as she recognizes the financial barriers that will make it difficult for her. Her haven from the chaos is the kitchen.

“[Cooking] is a steady thing in her life that reminds her of her strength and reminds her that she is good,” says Acevedo. “That she is literally just a good person even when she is being shamed or feels like she should be ashamed, in many capacities.”

“I did want to play with the ways that sometimes we want to make maybe robots of young people."

Although Emoni is a talented home chef, when she joins a cooking class at school, she struggles to keep up with the rules, tests, and restrictions. "Even with extended time, I don’t always do well on tests," says Emoni. "I’m lucky the teachers at Schomburg work with me to do additional projects that demonstrate I understand, but school isn’t my thing at all." Acevedo wanted to demonstrate how strict classrooms can sometimes stifle the passion and creativity of teens.

“I did want to play with the ways that sometimes we want to make maybe robots of young people,” says Acevedo. “We want them to look and sound a certain kind of way and what they're bringing to us is outside of what we might know how to deal with.”

Emoni doesn’t know if pursuing cooking as a career is a wise move. But slowly, she learns to trust her ability to make decisions. “And like a map I’ve been following without knowing the exact destination, I know now I’ve been equipping myself with tools from the journey to help me survive when I arrive,” Emoni says. “Although I don’t have all the answers for what is coming next, I can finally see a glimpse of where I, Emoni Santiago, am going.”

In building that trust with herself, Emoni learns to embrace her identity as a young mother, a budding chef, and as a Black Latina. She is often asked that dreaded question — "Where are you from?" — and she has learned to accept the entirety of her identity. "But it’s like I’m some long-division problem folks keep wanting to parcel into pieces, and they don’t hear me when I say: I don’t reduce, homies. The whole of me is Black," Emoni says. "The whole of me is whole."

Emoni is a dynamic character who juggles as many — or more — challenges as most adults. She makes mistakes, finds new friends, and learns to trust herself enough to take a huge leap of faith. Despite the hardships depicted in this novel, it’s ultimately a story of happiness.

“How does this kid find joy? How do they find hope? How do they make it work?" Acevedo says. "I fundamentally believe that stories about young people have to have those things, especially young people of color because they so often don't see themselves reflected in ways that allow them to win."