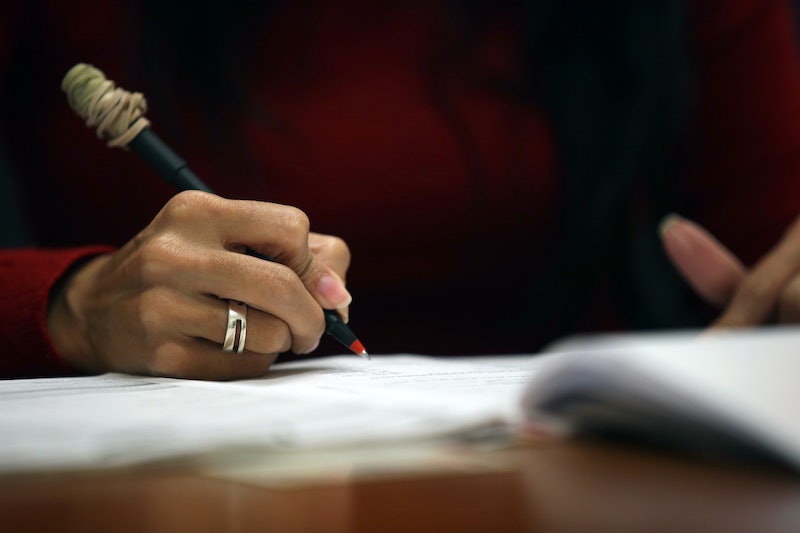 High school students in Indiana may soon be required to pass the exam traditionally administered to immigrants seeking U.S. citizenship if they hope to receive a diploma. A bill that would make the U.S. Citizenship Test a graduation requirement in Indiana has passed the state's Senate, paving the way for a potential major change to Indiana's graduation requirements come 2020.

According to The Hill, Senate Bill 132 passed the Indiana state Senate 31-17 after being introduced earlier this month by state Sens. Dennis Kruse state Jeff Raatz. The bill seeks to make passage of the U.S. Citizenship Test a mandatory requirement for high school graduation at all of the state's public schools beginning in 2020. If passed by the House and signed into law by the state's governor, students who are unable to answer at least 60 of the test's 100 questions would be denied a high school diploma or high school equivalency certificate — even if they'd fulfilled all of the school and state's other graduation requirements.

"We have many young people in our country, and in the state of Indiana, who do not know a lot of simple information on our government and on our country and some of our history," Kruse recently told The Times of Northwest Indiana.

Raatz told the paper he felt constituents didn't "understand the system," claiming they "don't know that we're state senators; we don't belong in Washington, D.C." The U.S. Citizenship Test, however, does not contain questions about specific states' governmental systems but rather focuses on national history and the federal government.

The test includes questions such as, "Who is in charge of the Executive branch of the federal government" and, "There were 13 original states. Name three" or, "Who was President during the Great Depression and World War II?"

But this reportedly isn't the first time Kruse has attempted to make the U.S. Citizenship a graduation requirement for Hoosier students. According to The Indianapolis Star, Kruse introduced a similar bill in early 2015, which did not garner enough support to pass both the House and the Senate.

What's more, Senate Bill 132 isn't the only education-related legislation Kruse and Raatz have introduced to the Indiana state Senate this year. The state senators are also the authors of Senate Bill 373, which seeks to require "each school corporation and charter school" to hang a poster or framed picture baring the phrase, "In God We Trust" in every classroom and library on its campus. The bill would, if passed, also allows schools to teach creationism and would require "a course surveying religions of the world" be added to high school curriculum. In its text, the bill appears to only specifically mention the Bible as potential curriculum for said survey course.

Before it can become law, however, Senate Bill 132 will need to pass a vote in Indiana's House of Representatives, where the bill's future appears to be more uncertain. On Saturday, Indiana House Speaker Brian Bosma told the Associated Press he did not know if the bill would even be taken up by the House for a vote.