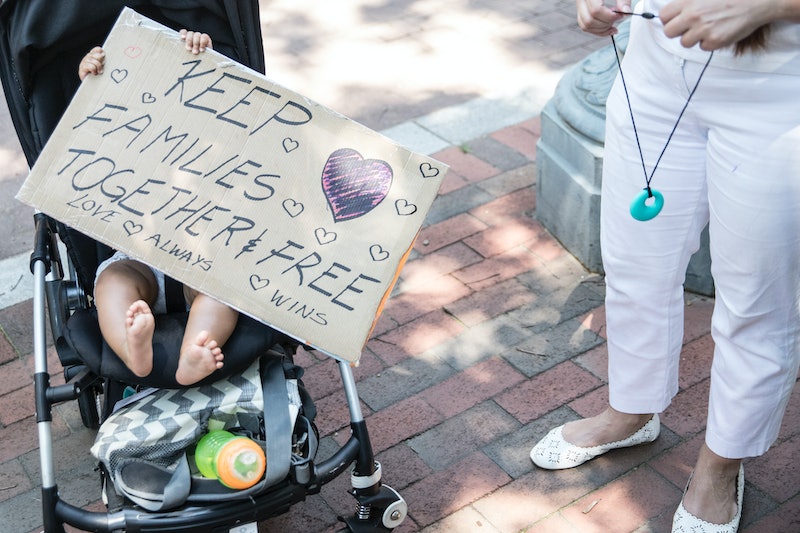 The Trump administration's "zero-tolerance" immigration policy has sparked widespread condemnation from people from all walks of life. Now, joining that list of protesters is an Indianapolis church that protested Trump's immigration policies with a display showing Joseph, Mary, and baby Jesus being "detained" behind a tall fence. In photos shared by NBC News, all three religious icons can be seen behind a cage in the Christ Church Cathedral yard.

It was a protest purposefully planned by the church's Rev. Canon Lee Curtis, according to NBC News, who stands against the president's approach to immigration.

"A number of our congregants at the cathedral are first or second-generation immigrants and this situation is not abstract to them," Curtis told the network. "The statement with the Holy Family says as much about our policy as any statement would say. We want an end for family detention. Families, all families, every family, is holy, and we hope and pray that families who are seeking out a better life for their kids are afforded that opportunity."

Under Trump's "zero-tolerance" immigration policy, over 2,000 children have been separated from their parents — an administrative practice that has been condemned as cruel and inhumane by analysts and organizations, including human rights activists.

Other members of the Christ Church Cathedral, like Rev. Stephen Carlsen, also agreed with Curtis' assessment and told NBC News, "I know what the Bible said. We're supposed to love our neighbors as ourselves." The poignant display first went up on Monday night. It could stays for days or be taken down soon; neither Curtis nor Carlsen told NBC News the church's protest plan.

But it's clear that the Christ Church Cathedral has won the attention as well as praise of others not only in Indianapolis but also online. The church's official social media account on Twitter shared the image of the detained figures of Joseph, Mary, and Jesus on Tuesday. One Twitter user retweeted the image and said, "Using your faith to invoke positive change. This is what Christianity is supposed to be."

The church's protest has also won admiration from those who say they typically don't side with churches. In one case, one Twitter user said, "I don't often agree with churches. It happens basically never. But this — this is ACCURATE AF."

From the looks of the reactions on Twitter, it was clear that Christ Church Cathedral's silent demonstration, with Christianity's main icons in a cage, stunned and moved many online.

Radically progressive as the church's message may be, it won't be the first time that a religious establishment took a stand against Trump's cruel immigration policy. In New Jersey, Rutherford Congregational Church's pastor Rev. Ron Verblaauw told NBC News, "Separating children from families is the first sign we are not the land of the free and the home of the brave anymore. We are the scared."

Other figures from minority religions in the United States, such as Islam, have spoken against Trump's immigration policy of tearing families apart. On Facebook, Muslim pastor and civil rights activist Omer Suleiman wrote about his experience seeing immigrant families deported.

In his conversation with NBC News, Curtis said that the church planned to continue protesting against the current administration's policy. It seems like a fight that will go on. "This is something that we preach and teach about," Curtis said, "and we are partnering with other groups in the state in order to see meaningful reform for detention and deportation. We walked and supported people through ICE deportation proceedings before too."