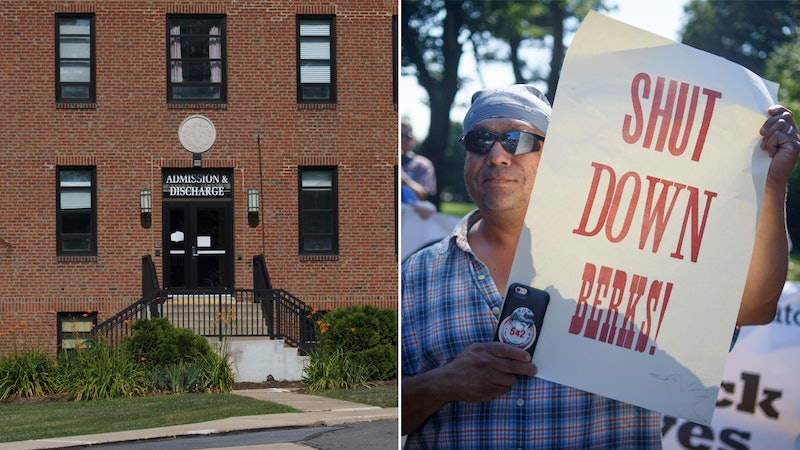 During a press conference last week announcing the Trump administration’s decision to rescind the Flores Settlement Agreement, acting Department of Homeland Security (DHS) Secretary Kevin McAleenan cited an example of one of the “family residential centers” where the federal government may soon be allowed to detain immigrant families indefinitely. Parents and children receive three hot meals a day and have entire suites to themselves in the facility, McAleenan said, adding that while kids are free to watch big-screen televisions and play video games, they must attend school five days a week.

McAleenan was talking about the Berks County Residential Center in Leesport, Pennsylvania, better known as just “Berks,” a place that legal advocates call “a black hole where the Flores Agreement doesn’t exist.” Berks was an interesting choice for McAleenan to highlight. The facility has a well-documented history of abuse and neglect, and has also subjected immigrant families to prolonged detention in clear violation of Flores, which generally limits detention of children to 20 days.

The Trump administration’s proposed rule to amend Flores would allow Immigration and Customs Enforcement (ICE) to detain migrant families indefinitely during the duration of their court proceedings. It would also remove state licensing requirements for family detention centers, allowing ICE to license and regulate family facilities on its own. This means the agency “taking care of” migrant families in detention would be the same agency trying to fast track their deportations.

The Flores Settlement Agreement was the result of a 15-year-old girl’s class action lawsuit. Flores requires the federal government to place unaccompanied immigrant minors with family as quickly as possible, and to keep immigrant children who are in custody in the least restrictive conditions possible. Initially, Flores didn’t take into account children who migrated to the United States with a parent, because the agreement was put into place before family detention existed. In 2003, the federal government restructured, creating DHS, ICE, and the Office of Refugee Resettlement (ORR), the federal agency now responsible for the care of unaccompanied immigrant minors.

Once the federal government began operating family detention centers, Flores evolved to include specific rules about how long and under what conditions children can be detained alongside their parents. The general standard is that the government cannot detain children in family detention for more than 20 days.

A coalition of 20 states has already announced a lawsuit against the Trump administration's proposed rule to amend Flores, but the new regulations may still be implemented. This will subject children to unsafe and unhealthy conditions, but you’d never know it by the rosy picture McAleenan painted of Berks. What the DHS secretary failed to mention about that particular family detention center could fill a book — or rather, thousands of pages of court documents.

A “Pattern Of Abuse” At Berks

In 2016, a 40-year-old Berks employee named Daniel Sharkey became the first detention center worker to be convicted of institutional sexual assault. Sharkey, who eventually pleaded guilty, claimed he had a consensual sexual relationship with E.D., a 19-year-old asylum seeker who fled Honduras after being sexually and physically assaulted by her partner. In one instance, a child detained at Berks witnessed Sharkey sexually assault E.D., according to the criminal complaint.

This is just the tip of the iceberg. David Bennion, an immigration attorney in Pennsylvania who represented two families detained at Berks, tells Bustle it is “sheer luck” that no children have died at the facility. Bennion alleges Berks has regularly been in violation of Flores by subjecting immigrant families to prolonged detention and failing to provide even a basic level care.

Bennion says that even when ICE hasn’t honored the Flores agreement at facilities like Berks, it’s important to understand that it has had something of a “restraining effect” so far that would be lost in Trump’s rule change.

“Without Flores, ICE would just do what it always wants to do, which is detain every family indefinitely until they can be deported,” he says. “It’s a pattern of abuse. Flores isn’t being honored [at Berks], and ICE is ignoring the rules it’s supposed to be bound by. Berks has routinely violated the 20-day rule, and iterations of this have happened at other family detention centers, but it’s most egregious at Berks. These patterns have not been rectified — and it’s going to get a lot worse if they gut Flores.”

Carol Anne Donohoe, another immigration attorney in Pennsylvania who has represented hundreds of families held at Berks, says the trauma experienced by families at the facility may soon be the norm.

“At Berks, there have been documented cases of suicidal children. There has been sexual assault, medical neglect, all kinds of abuse,” Donohoe tells Bustle. “If McAleenan wants to talk about Berks like a model facility, let’s shine a light on what’s actually happening there.”

Currently, Berks is detaining children and families even though it’s not clear whether it’s licensed to operate. The facility is operated by Berks County under a contract with ICE, but the Pennsylvania Department of Human Services chose not to renew its license with Berks in 2016. The county filed an appeal over the non-renewal, which is still pending. Three years later, Berks continues to operate in this legal gray area.

"The ultimate problem is that people with the power to end family detention aren’t, and it’s because they don’t view immigrants as human."

The Pennsylvania Department of Human Service told Bustle in a statement that Berks is still operating because the appeal is pending. A spokesperson noted that the department conducts both scheduled and unscheduled visits to the center to monitor the facility, and that Gov. Tom Wolf has urged Trump to shut the center down. "State officials cannot shut the facility down without a finding of conditions consistent with relevant case law and precedent deemed to be immediate and serious danger to the life or health of the children," the statement noted.

In the meantime, an entire movement has sprouted up with the goal of shutting down Berks. Legal advocates, immigrant rights organizers, and community members say it is time to put a stop to the human rights abuses that have plagued the detention center for years. In recent litigation, a father and his 3-year-old son allege they were put in solitary confinement for two weeks. The facility has also been accused of extreme medical neglect, including the case of a 3-year-old Honduran girl whose mother said she threw up blood for four days before employees at the facility allowed her to go to the hospital. Advocates also warn of troubling policies at the facility, like staff’s nightly practice of shining flashlights into bedrooms and interrupting children’s sleep with bed checks every 15 minutes.

ICE officials told Bustle in a statement that Berks “has an outstanding track record with the Pennsylvania Department of Human Services and is regularly awarded exceptional ratings concerning the health, safety, and treatment of residents residing at the Center.”

“U.S. Immigration and Customs Enforcement (ICE) is committed to ensuring that those in our custody reside in safe and humane environments and under appropriate conditions,” they added.

McAleenan’s press conference talking points about Berks were “100% false,” according to Donohoe. The attorney says children are not allowed to go outside unless a guard is present, and while detained families get three hot meals a day, they call the food “monkey meat” because they can’t identify what’s served. There are two classrooms on site, one for young kids and one for older kids; one class could group together kids ages 12-17, all operating at different reading levels and with different levels of English and Spanish proficiency (increasingly, children arriving from Central America speak indigenous languages, creating another barrier). Donohoe says the kids mostly do worksheets, and “no actual learning takes place.”

Jasmine Rivera, campaign coordinator with the grassroots organization Shut Down Berks Coalition, says she’s concerned about the long-term effects imprisonment will have on young children who are detained.

“Even if there was no abuse or neglect, talk to any medical professional about the effect that imprisonment has on kids. Even in the best case scenario, it’s traumatic and has long-term impacts on their physical and mental health,” Rivera tells Bustle. “The ultimate problem is that people with the power to end family detention aren’t, and it’s because they don’t view immigrants as human.”

Donohoe, Rivera, and other advocates say they have always understood that shutting down Berks is pivotal, not just for the parents and children inside, but for all families who may be subjected to detention. They also knew that if Berks was allowed to continue detaining families indefinitely, it would only be a matter of time before it became standard practice.

And now here we are.

“This Is Truly Hell”

Donohoe says she woke up the day after McAleenan’s press conference, angry about the DHS secretary’s assertion that asylum seekers take advantage of Flores as a “legal loophole.”

Court proceedings for detained immigrants at Berks are “slapstick,” the attorney says, held around a tiny desk over video conference so that Berks employees don’t have to be tasked with transporting parents to asylum hearings. She describes the internet connection at Berks as so bad that video of the judge and ICE’s attorney might cut in and out. Donohoe says she, a parent, and a child would crowd around the desk, sometimes with two different interpreters to translate Spanish and the Mayan language Mam. Often they could hear each other, but not see each other on the monitor — a major problem. Donohue recalls one client who was testifying and motioned that someone threatened to slit her throat, but the judge couldn’t see what she was describing.

Despite the circumstances, Donohoe has won many asylum cases. But detained immigrant families without legal representation have little chance of winning their case, especially not under the Trump administration.

For now, there is one other official family detention center in the United States: the South Texas Family Residential Center in Dilley, Texas, though that may soon change. As the Trump administration moves to detain families indefinitely, more space will be needed to imprison parents and children, creating a need for new facilities to operate, likely at reduced standards. Donohoe says she believes more children may die in custody, but that there will also be deaths the public doesn’t hear about.

“They left their home countries because they feared for their lives and now Trump is creating this conveyor belt to send people back,” Donohoe says. “People will receive awful treatment in custody, they’re going to be denied due process, and then they’re going to be returned to their countries and maybe murdered. This is truly hell.”

This article was updated on Wednesday, Aug. 28, with comment from the Pennsylvania Department of Human Services.