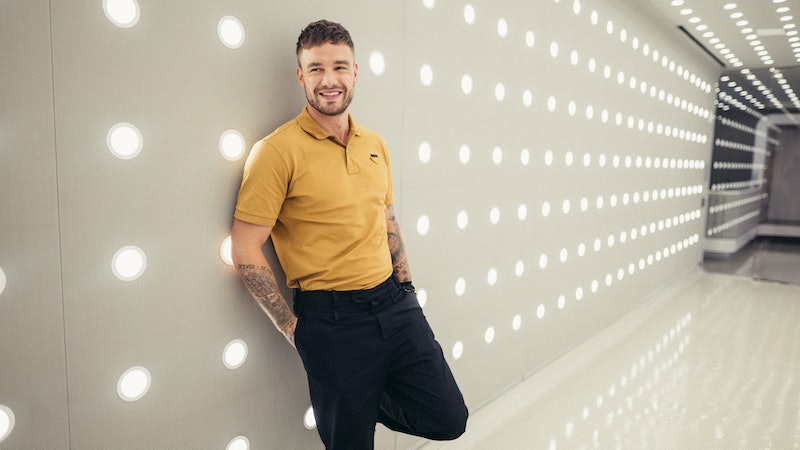 Fans have had to wait over a year for Liam Payne's next single drop, but the consensus is that the gap was definitely worth it. "Stack It Up" released on Sep. 18 along with a colourful video shot in a New York arcade. The Ed Sheeran-penned track features A Boogie wit da Hoodie and is a continuation of the former One Directioner's solo urban sound. To celebrate the much-awaited release, Bustle was given an exclusive inside look at Payne's NYC trip to promote the single.

"Me and Boogie had so much fun doing ["Stack It Up"]. This is a song I’m really proud of and I can’t wait to show you what’s coming next!” Payne said in a statement.

The upbeat track is all about having money on your mind, but Payne admitted that he wasn't sure about the lyrics at first. Speaking to Hits Radio, the 26-year-old said he asked Sheeran to alter a few of the lines, "so it's about making money with someone or for someone, or for a specific reason rather [than] just about making money." He added: "We all know you can have all the money you want but, at the same time, if you've got nobody to share it with it's a bit pointless."

Compared to the OTT music videos that are all over the industry right now, Payne's arcade extravaganza is a breath of fresh air. Fun yet simple, it comes complete with a retro game animation of the singer and Boogie.

Below, you'll find a behind-the-scenes diary of Payne's New York jaunt. From Times Square outings and candid recording booth moments to an insight into his role as a global ambassador for Hugo Boss, it's jam-packed with honesty and humour.

Relaxing in the SiriusXM studios

In between magazine interviews in a New York skyscraper

In the booth for a recording session at Jungle Studios

In Times Square with A Boogie wit da Hoodie

All dressed up for a Hugo Boss event at Bloomingdale's

Camera-ready ahead of some Australian TV interviews

In just two years as a solo artist, Payne has sold more than 18 million singles. Starting with debut track "Strip That Down", his career has blossomed with each and every step, leading to a succession of catchy hits like "Polaroid", "Bedroom Floor", and Fifty Shades Freed's "For You" duet with Rita Ora.

Payne has spent 2019 working on his debut album, although fans are still eagerly awaiting a release date. (Let's hope one is on the way real soon.)

But music hasn't been his only project. In the summer, his capsule collection — encompassing a mixture of streetwear-type styles and formal pieces — with Hugo Boss dropped. November will see the launch of a new Sky One special starring Payne. Teaming up with former special forces soldier Ant Middleton, the star will travel to Namibia for an adventure full of honest, eye-opening discussions.

Liam Payne’s single "Stack It Up" ft. A Boogie wit da Hoodie is out now.