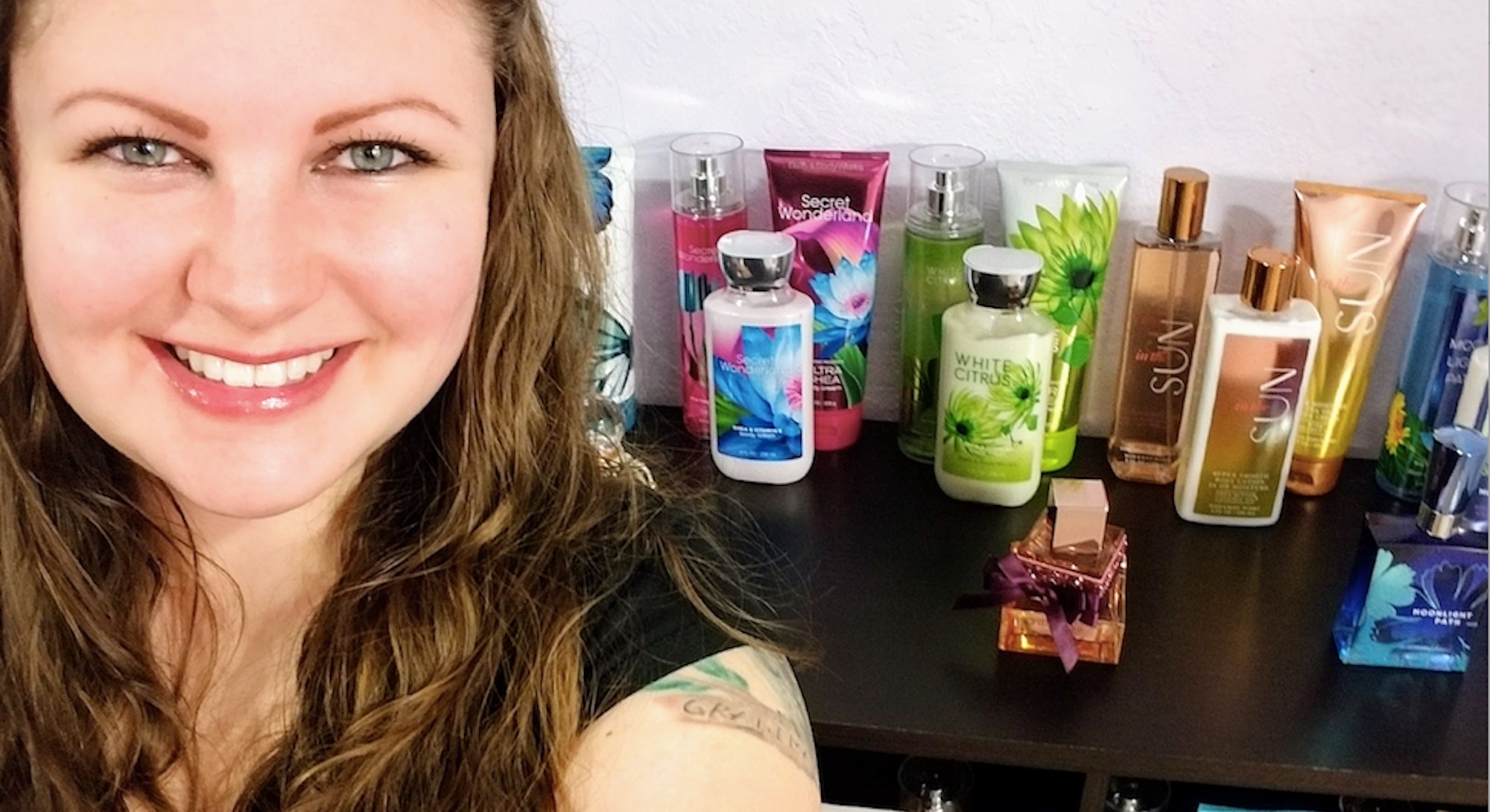 "How's the penguin?" is a common question 26-year-old Serina Cota is greeted with when she stops by her local Bath & Body Works — a trip that she makes about once a week, every week.

The penguin in question — a roughly 3 feet tall, $150 tall stuffed animal named Piper — was purchased by Cota on one of her regular BBW trips. At just 4 feet 10 inches, Cota struggled to carry the supersized penguin out of the store, barely making it to her car. But she had to have that penguin. There was only one available per store each holiday season, and she had missed the chance to purchase the massive toy the year before, so she snatched it up. Cota tells me that this feeling — the impulse to purchase products before they disappear — is exactly what has created her current, massive Bath & Body Works collection, one that includes over 180 candles and more than 250 body care products.

"It's...not even rational really, but I have this fear that when they like come out with a scent that I love they're gonna get rid of it," Cota tells Bustle. "So I stockpile them."

Cota's impulse to collect may be more rare, but her passion for the brand — and, more particularly, her connection and dedication to particular scents — is far from unique. A brand that has existed for less than 30 years, Bath & Body Works still somehow manages to consistently transcend what's trending in beauty and remain a nostalgic favorite, a hometown go-to, a trusted and welcoming storefront. Since 1990, Bath & Body Works has been doing roughly the same thing through tens of thousands of different scents, resulting in a type of nostalgic familiarity that seems to resonate with everyone — whether they want to admit it or not.

Libby Allnatt, a 22-year-old from Phoenix, AZ, shops at Bath & Body Works roughly three times a month. What began as a teenage love of mists and lotion has become a shopping habit that has followed her into adulthood, one that she tells me feels "comfortable" to her, even if not always practical.

"My friends and I would always give each other the Sweet Pea scent for our birthdays and Christmas," Allnat says. "Sweet Pea was...the hot thing in middle school."

Now, Allnatt says she regularly adds things like, "Buy more Bath & Body Works soap" to her to-do list. It's not always the most practical or convenient option ("I know it's so easy to like go to CVS and buy [soap]," she tells me), but for Allnatt it still feels better than anything else.

"It just gives you a sense of comfort," Allnat tells me.

"Comfort" is, unsurprisingly, a word that comes up often when talking to people about Bath & Body Works. The only term that tends to trump it in conversation is another big c-word: Candles.

According to reps for the brand, in 2017, Bath & Body Works sold enough 3-Wick Candles to stretch from Miami to Vancouver if laid side by side. This might seem like an absurd, unimaginable number, but when you talk to fans of the brand and its candles, this statistic starts to make sense very quickly.

"It is like a holiday. You can feel it in the air. I got to my store right before it opened and there was another woman there who was waiting for them to lift the gate and she had a dozen donuts for the [sales associates] in one hand, and a stack of coupons and a list of what candles she wanted in the other. It was on," McDowell says, noting that her and this other woman are now friends, often seeing each other at their local Bath & Body Works.

I got to my store right before it opened and there was another woman there who was waiting for them to lift the gate and she had a dozen donuts for the [sales associates] in one hand, and a stack of coupons and a list of what candles she wanted in the other. It was on.

"I did prep beforehand, and most people do. Some malls were opening their stores at 6 a.m., so there were early risers. My store didn’t open till 9 a.m. There could be some stretches and lunges involved," McDowell jokes about Candle Day.

McDowell says the most candles she's ever purchased on Candle Day is 13, due to the fact that she physically couldn't carry any more than that. But, if you're familiar with the Bath & Body Works community, this number is low. Very low.

"I saw haul [pictures] of 40-plus candles. Some people actually bring in wagons to take them back to their car," McDowell says.

The candle community is strong.

In the end, Cota left with 66 candles.

Serina Cota with her collection.

If you think that Cota and McDowell's experiences are unique or just a couple in a million, you'd be wrong. As McDowell tells me, "the candle community is strong."

"We have quite a few regulars," Severinski says, telling Bustle that some people drive from as far as four or five hours away to visit the store. "Some of them are [in] every month or so and they'll stock up and buy a cart full of candles. We have a few people who will borrow a cart from Walmart and fill up about four or five candle crates when they do their trips. Each crate can hold six crates."

While Bath & Body Works carries a variety of 3-Wick Candles, the vast amount of product it creates might not be obvious until you consider just how many scents they sell. Throughout most of the year, according to brand reps, Bath & Body Works carries between 300 and 400 individual fragrances in its stores — at Christmas that increases to between 400 and 500. This means a constantly rotating, ever-changing selection of scents, including some that stay on shelves for years and years. And any of them could disappear tomorrow, if they brand wanted. The people who work at Bath & Body Works will sometimes they'll refer to scents as "her/she." "She's coming back next year," or "She's retired now." The scents are inherently personal. And it's exactly why people buy lotions in bulk or candles by the crate.

It's not shocking that most of Bath & Body Works' most popular products reflect exactly what it is that makes the brand so irresistibly loveable. They're warm and comforting, changing enough to keep things interesting, remaining just enough of the same to feel familiar. In a world of trendy, made-for-already-gorgeous-people beauty brands that can often seem inaccessible and intimidating, Bath & Body Works has no red tape. It's upfront about what it is, and what it is is for everyone.

In a world of trendy, made-for-already-gorgeous-people beauty brands that can often seem inaccessible and intimidating, Bath & Body Works has no red tape.

Bath & Body Works' most extreme fans may seem unrelatable at first glance, but their commitment to the brand is probably more universal than you realize. People like Cota and McDowell and Severinski love Bath & Body Works for the very same reason that all of us do. And, refreshingly, that love has nothing to do with how cool the brand is.

This isn't to say that the brand isn't modern or innovative, but that it leans into familiarity rather than aspiration. Bath & Body Works isn't selling you a vision of the perfect you as much as they're selling the vision of beauty you had in 1999 — a simple contentedness that has more to do with how you feel rather than how something looks on Instagram.

Bath & Body Works isn't selling you a vision of the perfect you as much as they're selling the vision of beauty you had in 1999...