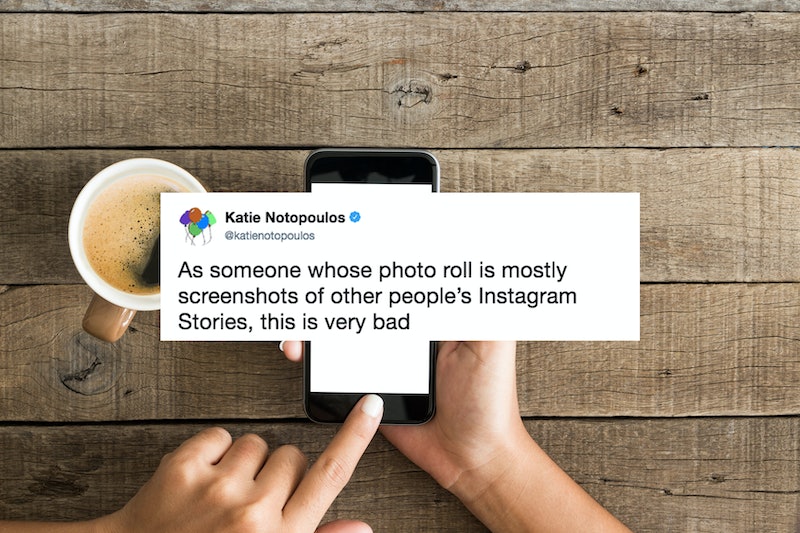 Sending screenshots of Instagram stories and posts is one of main modes of communication — but according to new reports, it seems my screenshotting days could soon be over. Instagram is testing a screenshot alert feature for stories with a small number of users, which means that — for those in the test group — users will get notified when someone screenshots their story. I know, I know, I was ready to freak out too. However, there is a silver lining: According to a rep for Instagram speaking to Bustle, the feature is currently only testing with a small number of users, and there are no current plans to roll the feature out to all Instagram users. Of course, the key words there are "no current plans"... but hey, it's something,

For the record, here's how it works for those who are in the test group. Basically, users get a warning the first time they screenshot a story, which lets the user know that the next time they take a screenshot of a story, the creator of the story will get notified. Additionally, the first time their story is screenshot by someone else, those users will be able to check their notifications in their viewers lift to see who snapped the screenshot. But, this is only currently happening for a small percentage users who are participating in the test, Instagram tells Bustle.

Despite it only being a test, people on Twitter are freaking out, which proves that almost everyone is a secret stalker, and no one wants their browsing behavior exposed. Hey, I get it.

There Are Tears & Fears

Currently, Instagram users only get notified when someone screenshots a direct message, which I don't really mind because those are supposed to be private. Though nothing on the internet is really private, but I like to maintain some level of denial.

Checking In On Your Ex Could Get Awkward AF

It's clear that people are worried about their habits being exposed.

Just Deny Everything & Say "Um, My Account Was Hacked"

Because no one wants to be called out as a creeper, some people are already posting Instagram story alert workarounds on Twitter so you can continue creepin' in peace, the way it should be.

Give Those Insta Alerts The Slip Like A Boss

Because this is only a test, you have nothing to worry about right now. However, if you don't trust big brother, Redmond Pie posted a few Instagram story alert workarounds on its website. One way to avoid being called out for screenshotting is to switch your phone to airplane mode before you take a screenshot of someone's story.

It's The End Of The World As We Know It

You can also browse Instagram on your computer and screenshot your little heart out, but let's be honest — most of us are scrolling from our phones.

And, People Are Not Feeling Fine

While this could end your ex bae and current crush creepin', I'd love someone like Lady Gaga to know that I screenshotted her story, so there is indeed a silver lining here.

But, Hey, We're All In This Together

Because, most of us are indeed creepers. A survey by Superdrug Online Doctor revealed that nearly 85 percent of people in the U.S. admitted to creepin' on an online crush, though only 25 precent of creepers ever admit it to said crush. Well, if the Instagram story alert feature eventually becomes a thing, the notification will admit it for you.

Also, Most Of Us Check Up On Our Exes

The interesting thing about this part of the survey is that single people were least like to creep on an ex on social media while 60 percent of married people and 52 percent of people in a relationship checked up an ex on social at least once a month. While you have nothing to worry about during this test phase if you're not in the group of users who have the feature, you may have to reevaulate what you screenshot and what you don't.