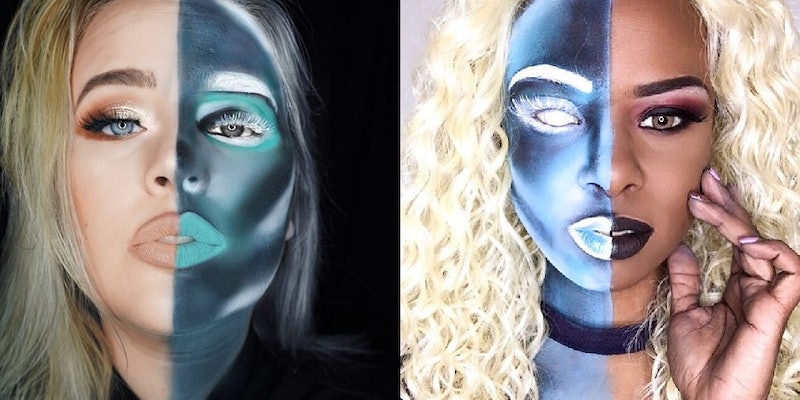 Makeup is fun to play with, in more ways than one. You can play with an eyeshadow palette to create a smoky eye, or you can use the palette to become an artist. The newest inverted x-ray makeup trend on social media lets you do the latter, allowing you to get a little more creative with your makeup brushes.

Self-taught makeup artist Kamila Patyna from Poland was one of the first to create a full face of negative makeup, and is credited as the trend's creator. Beauty and hair vlogger Lithunium Snow then took the idea and made a half-face of the inverted x-ray makeup look, which was then picked up by NikkieTutorials.

In Snow's YouTube video, he shared that he wanted to try a makeup look that would challenge him and push his limits. Snow then took a photo of his face and inverted the colors. He then mimicked the colors on one half of his face, creating an x-ray effect.

NikkieTutorials saw Snow's post on Twitter, and at first glance thought it was Photoshop. When she realized that the blue and black hues were actually makeup, she decided she had to try it herself. The makeup world has since jumped on the challenge, and below are some of the best reiterations.

Snow started off with the Anastasia Beverley Hills Lip Palette, since he believes that cream products are best for face painting. The palette has blue, white, and black shades, so it's perfect. Snow then used different shades of blue and black to slowly shade in color, creating a negative copy of his face.

In her video, NikkieTutorial joked about how she recently said that using black makeup scared her because of how impossible it was to blend. Now she is creating a black-heavy look, proving you sometimes have to go head-first into your fears. NikkieTutorials created a different reiteration of the challenge, where she first finished her makeup on one side of her face. The vlogger then created the perfect negative copy on the other half, including white contacts and white faux-lashes for extra impact.

Beauty vlogger Mik ap Mik ap tried the challenge on her channel, using electrical tape to separate her face. She then used various palettes to create the intense black and blue x-ray colors, most notably using the sapphire hue from the Focallure Everchanging palette.

Bry Bry used green and aquamarine tones to create her inverted makeup look. The vlogger used a Morphe palette to get her seafoam green hues.

Chantelle, a Toronto makeup artist on Instagram, also tried the makeup look. Her reiteration had bright pops of teal and bold strokes of white.

Zuri Fx took an intense take on the inverted makeup challenge. An expert at Halloween makeup, she was able to make her x-ray colors pop in a way that half of her face looked almost Photoshoped. Her eyebrows and lipstick where a blinding white, and her lush lashes and creamy contacts demanded attention.

Take the black and blue shadow out of your own makeup bag and try it yourself! It might take forever to wash off, but it's a fun experiment.