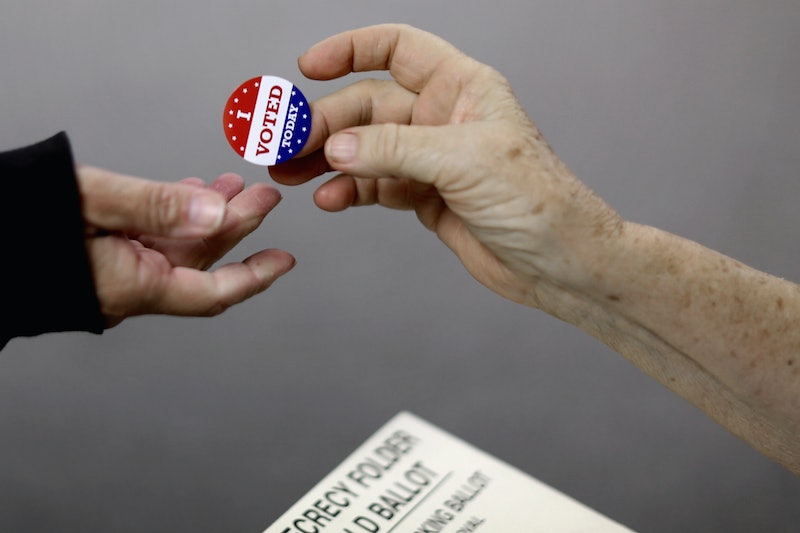 On Monday, the Iowa Democratic Party revealed a proposal that could radically change how people caucus in the state. Via the Associated Press, Iowa Democrats' 2020 "virtual caucus" proposal would allow Iowans to participate in the caucuses virtually, rather than in person. Given that the Iowa caucuses have, until now, been defined as a system that measures the physical size of a crowd to determine the popularity of a political candidate, this new change would be radical, to say the least.

Per Politico, the proposal suggests that people will be able to mark their attendance at a caucus through a telephone or smart phone on six specific days leading up to caucus night, which is Feb. 3. The reasoning for this new change is simple, according to Iowa Democratic Party Chairman Troy Price: it will allow more people to "participate" than the current system does.

Price said in a statement via The Associated Press,

Through this additional process we’re going to be able to give more Iowans a chance to participate in this process. Whether someone is a shift worker, a single parent, in the military, living overseas or experiencing mobility issues, this process will now give these individuals a voice in selecting the next president of the United States.

Price added, via Politico, "These changes will make the 2020 caucuses the most accessible, transparent, and secure caucuses ever, and give more Iowans a chance to have their say in our presidential selection process." He also called the efforts within the proposal the “most significant changes to the Iowa Democratic Party Caucuses since its inception in 1972.”

For now, the Iowa Republican Party has not signaled whether it will also propose a virtual caucus measure; however, it will hold a nominating caucus in February, which will mark the first time it has done so for an incumbent GOP president seeking reelection since 1976, according to caucus records.

For Democratic caucuses, the new proposed measure would allow voters to call in with their votes, Politico notes, offering their presidential selections for the Democratic nominee in a ranked choice style. The system would be similar to absentee ballot voting options for those who can't go to the polls for an election.

Though this measure would certainly help to make the democratic process that much more democratic, that's not the only reason the Iowa Democratic Party is seeking new approaches to the caucusing system. Another reason to embrace a virtual caucusing process is a more pragmatic one: the caucuses are literally becoming too big for the state to handle or accommodate. David Yepsen, the host of Iowa Public Television's Iowa Press Show, said in January via Politico, “The size of these things have outstripped the rules for which they were written."

Yepsen added, "The nature of the events have changed. These aren’t little party people sitting around the kitchen, which is what Jimmy Carter did and George Herbert Walker Bush [did]."

And although this year's caucus is likely going to be an extraordinarily massive affair, given the number of Democratic candidates who've already declared presidential bids, it's not clear if the virtual caucusing option will be available by then. Per Politico, the proposal will now be voted on by a state committee.