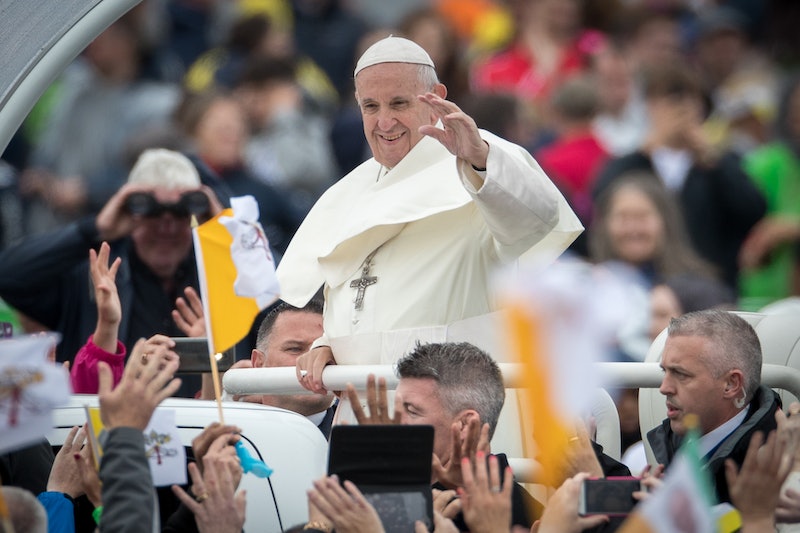 The last time a pope visited Ireland, he was welcomed like a rock star. That was nearly 40 years ago, in 1979. Ireland is historically known as the most Catholic country in the world, but if Sunday's protests are any indication, that status is likely long gone. During his public appearance on Sunday in Ireland, Pope Francis' visit was met with protests following sex abuse scandals in churches around the world, according to CNN.

Despite the gray and rainy skies, hundreds of thousands of people huddled in a Dublin public park to hear Pope Francis give Sunday Mass. But just a few miles away at Dublin City Centre, CNN reported, were thousands more, protesting against the church in light of allegations that members of the clergy hid their knowledge of the abuse for decades. This includes a grand jury report that accuses more than 300 Pennsylvania priests of abusing as many as 1,000 children, per NBC News.

Pope Francis' speech came on the same day that an ex-Vatican official accused the pontiff of covering up the sexual abuse reports of a retired American archbishop, former Cardinal Theodore McCarrick, for years, according to The New York Times. The pope would not confirm or deny the allegations, Reuters reported. Bustle has reached out to the Vatican for a response and will update accordingly.

The explosive allegation was made by Archbishop Carlo Maria Vigano, the former Vatican ambassador to Washington D.C., and Pope Francis wasn't the only one on his hit list — the 11-page document also has the names of other current and past Catholic church officials in the United States, Reuters reported. McCarrick was stripped of his title and resigned in July after sex abuse allegations against him came out. But these actions may be too little and too late for those fed up with the Vatican.

"I'm sure the Pope was sincere in his apology, but it needs to be followed up by action," said Jenny Moore-Mcgowan, a protester, to CNN. "We can never, ever, ever have these abuses again in Ireland. The lives of people for generations were ruined, not just the people who were in the institutional schools, the Magdalene Laundries, the mother-and-baby homes, but their children and grandchildren. It ran right through this country like a virus."

An estimated 5,000 people showed up to protest the pope's visit and the history of clerical abuse across the world, according to The Irish Times. The protest, called "Stand for Truth," included abuse survivors, LGBTQ+ groups, and women's rights advocates whose fury could be felt through their signs. One of the signs read, "The pope is protecting pedophiles," while another said, "Compensate those you enslaved."

"The Ireland that welcomed John Paul in 1979 is not the same Ireland anymore," protester Ailbhe O'Rourke told CNN. "It's completely changed. There are a lot of hurt people in this country."