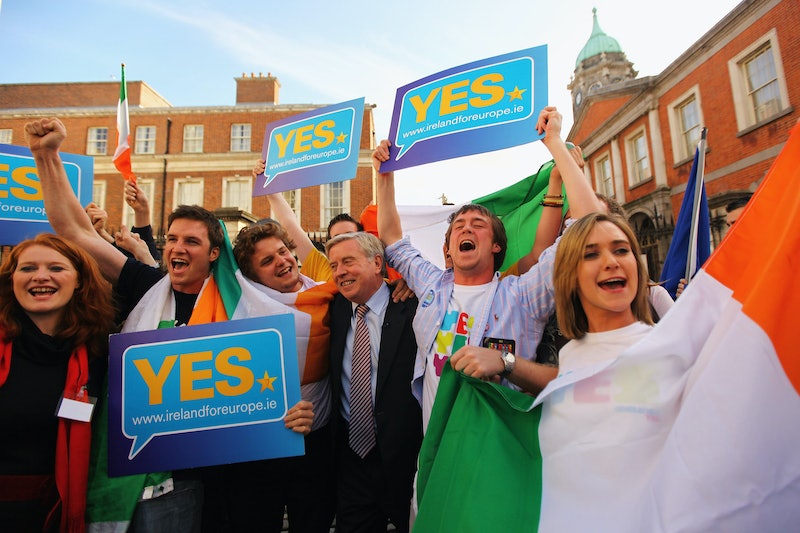 It's not official yet, but this is encouraging news for supporters of women's reproductive rights. As detailed by The Irish Times on Friday, an exit poll suggests the Ireland abortion referendum has won, which would repeal the country's eighth amendment make legalizing abortion a genuine possibility for the country for the first time in decades.

The exit poll, conducted for the paper by Ipsos/MRBI, reportedly projects that a huge majority of Irish voters back the referendum to repeal the anti-abortion constitutional amendment, by a margin of 68 percent yes versus 32 percent no. It's important to note that this is an exit poll, and as such the victory for the "yes" side in the referendum is not yet official. The votes won't actually be counted until Saturday, after which point the final results will become fully clear.

If the exit poll holds true, however ― and it would have to be wildly inaccurate for the "no" side to prevail, as it currently has "yes" leading by a staggering 36 points ― the amendment, first passed in 1983, will be repealed, paving the way for legislation that could legalize abortion in Ireland after more than 150 years of being outlawed.

The impact of a "yes" win for women's reproductive rights in Ireland cannot be overstated. Although abortion was already illegal in Ireland prior to 1983, thanks to the Offences against the Person Act of 1861, the eighth amendment of the Irish constitution was approved by national referendum as a means to put up a harder barrier to legalizing abortion.

The eighth amendment effectively draws legal equivalence between the life of a mother and her fetus, thus outlawing almost all abortions. The text of the amendment, which stands to be repealed if the exit poll turns out to be accurate, is as follows:

To be clear, the repeal of this amendment does not mean abortion has been legalized just yet. Irish lawmakers will need to author and pass reforms to pre-existing anti-abortion law in order for that to happen. But the repeal of the eighth amendment was the necessary prerequisite to that happening, and based on the exit poll commissioned by The Irish Times, it sounds very likely that the repeal campaign was victorious.

If the "yes" side really is in the lead after all the votes are counted on Saturday, it'll represent the biggest win for reproductive rights in Ireland in generations. While it's impossible to know just yet what the final margins will be, if they're anything close to what the exit polls are currently suggesting, that would represent a massive sea change from when the eighth amendment was approved 35 years ago.

In that referendum, Ireland's voters approved the anti-abortion amendment by a whopping 67 percent, against just 33 percent opposed. The exit polling margin of +36 for the "yes" side, if accurate, would mean that the margins from the eighth amendment's passage have effectively flipped sides in the past few decades.

If you're curious to follow when the votes are actually counted, and the results will be made final, you'll need to either stay up pretty late tonight or wake up pretty early, at least if you live in the United States. The vote-counting will begin at 9:00 a.m. local time according to the BBC, which is 4:00 a.m. ET, or 1:00 a.m. PT.