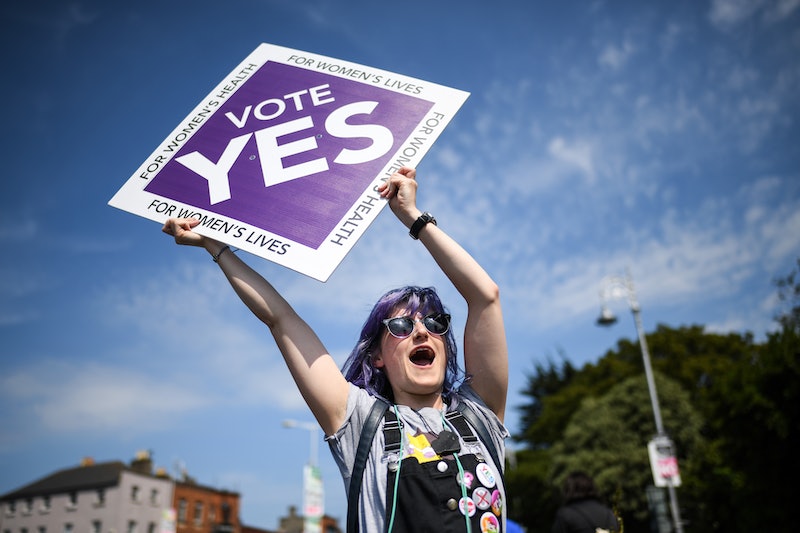 After 35 years of upholding one of the world's most restrictive abortion bans, Ireland voted for choice. In a nationwide abortion referendum, Ireland voted to repeal the Eighth Amendment of its constitution, Prime Minister Leo Varadkar said, effectively enabling new laws that could allow Irish women to legally receive abortions.

The final tally of the vote saw the pro-choice side come out victorious by a landslide, confirming the results of two exit polls. The anti-abortion campaign conceded defeat hours before the official result was announced.

This outcome was extremely hard-fought by its proponents, with hundreds of thousands of dollars poured into advertising and campaign materials, according to The Irish Independent. Proponents of the referendum wanted to see the Eighth Amendment overturned, thus opening up the possibility of legal abortion in cases where the mother's life is not in danger. (The Eighth Amendment places equivalent value on the life of a mother and her fetus, thus effectively outlawing abortion.) Its opponents, on the other hand, wanted the amendment to stay in place, effectively preventing legal abortion from ever becoming a reality for the Emerald Isle.

As the official results trickled in, Prime Minister Varadkar told reporters, “What we have seen today is a culmination of a quiet revolution that has been taking place in Ireland for the past 10 or 20 years."

The Eighth Amendment of the Irish constitution has for decades ruled out the possibility of abortion becoming legal in Ireland, a fact that led pro-choice activists and advocates to push for the May 25 referendum. The amendment, which was first added to the constitution in 1983, says:

At the time the amendment was passed, also by national referendum, it prevailed with 67 percent of the vote, compared to 33 percent opposed.

The longstanding illegality of abortion in Ireland has forced many women ― some nine per day, according to The Telegraph ― to travel to the United Kingdom to get an abortion there, instead. According to the paper, approximately 170,000 women and girls have made this kind of trip since 1980, leaving their homeland in order to exercise choice and agency regarding their pregnancies.

Furthermore, as USA Today noted in its coverage of the referendum, an estimated three women per day risk 14-year prison sentences by taking pharmaceutical drugs to terminate their pregnancies, ordered online from locations out of the country.

To be clear, the Eighth Amendment didn't turn Ireland from a pro-choice state into one where abortion was outlawed. To the contrary, abortion was already illegal in Ireland ― a country which has politically and culturally been heavily influence by Catholic doctrine. In fact, as The Independent notes, it was illegal dating clear back to 1861, the result of the Offences against the Person Act.

In the 1980s, however, anti-abortion forces in the country rallied behind the idea of a constitutional amendment. That way, they could ensure that even if public opinion began turning in favor of reproductive rights, it would be even harder for abortion to be legalized.

And now, with the referendum vote in the books, lawmakers will now have an opportunity to pass new legislation to give Irish women reproductive choice.

“Under the Eighth Amendment, women in crisis pregnancy have been told: 'Take the plane or take the boat,'" Irish Health Minister Simon Harris said On Saturday. "Today we tell them: 'Take our hand.’”

Ireland's lawmakers vowed to pass new legislation that will allow abortion up to 12 weeks if the ban was repealed. Prime Minister Varadkar said the new law would be enacted by the end of 2018. "The people knew what we had in mind," Varadkar said, according to The Washington Post, "and I don't think it would be right to depart from that at all."