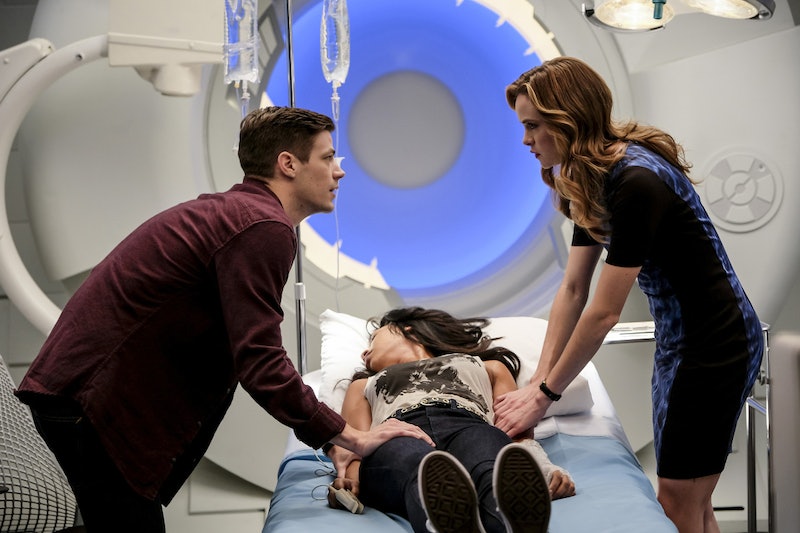 Flashpoint reared its ugly head again on this week's episode of The Flash, "Untouchable." One of the last two metas created by Alchemy showed up in Central City and began killing the cops that had put him away in Flashpoint. On his revenge list: a man who is a jazz musician in this timeline and Joe West. Despite being targeted by a meta who kills everything and anyone he touches, Joe insisted on living his life. With tensions high and her fear spiking, Iris told Joe about her death on The Flash in the hopes that he wouldn't go chasing danger.

Barry is trying to train Wally to run faster so that he can save Iris from Savitar on The Flash, but Wally still has a lot to learn, especially when it comes to using his powers for things other than running, like phasing through solid matter. And, while they are doing what they can to stop the future Barry saw from happening, the new meta in town is showing signs they might already be too late. When the meta first attacks, it solidifies one of the details of that future, and the reality begins to set in for Iris that she might die. That plus the stress of a metahuman going after her father causes Iris to break down and finally tell Joe the truth. Only, it might have been for naught, because a few hours later she gets attacked by the new meta, and her body begins to disintegrate uncontrollably.

Luckily, Wally arrives just in time to get Iris to Star Labs before she dies, but to save her, Caitlin has to use her Killer Frost powers. Using her powers to save Iris almost turns Caitlin into Killer Frost, but with Julian's help she is able to keep her cool (pun intended), and, in the end, with everyone working together, Wally learns to phase and they defeat the meta and save Iris.

Going forward, Joe makes sure that everyone knows that if they are going to save Iris, they need to do it together, as a team. Now that Joe's in the loop, he's going to do everything he can to make sure his daughter survives. Let's hope it works.