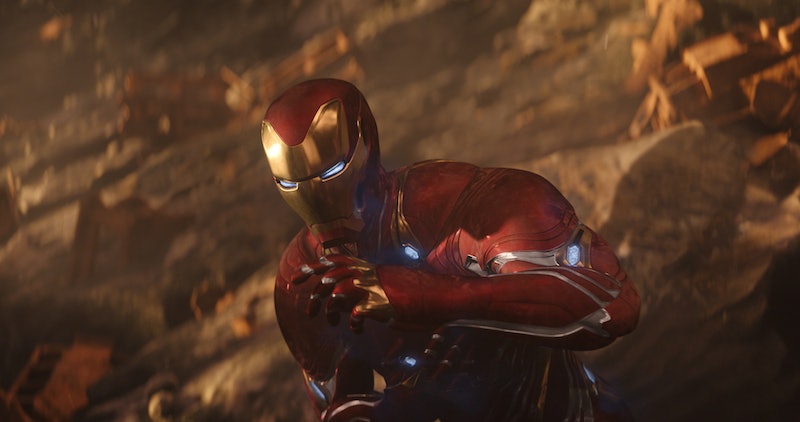 Assemble the Avengers! In what very well could've been a storyline of a Marvel film, the original Iron Man suit was stolen from a Los Angeles warehouse, a Los Angeles Police Department spokesperson confirmed to The Hollywood Reporter on Wednesday, May 9. Bustle reached out to the LAPD for comment, but has not yet heard back.

Instead of calling upon a contingency of comic book superheroes, the owners of the storage facility in Pacoima, near Los Angeles, where the iconic red and gold costume originally worn by Robert Downey Jr.'s playboy billionaire Tony Stark in 2008's Iron Man had been kept, dialed 911 on Tuesday, May 8. The owners admitted, however, that the theft could have taken place any time after February, when the suit — valued at an estimated $320,000, according to THR — was last seen.

According to a Los Angeles CBS affiliate, nobody was able to locate the suit at the warehouse last month and eventually sounded the alarm this week when they came up empty-handed once again after another search. Police have not confirmed who exactly owns the site, but the question on so many fans' minds was why such a valuable piece of Marvel memorabilia was tucked away in storage to begin with.

Once fans had a second to let that fact digest, several then took to Twitter to express their outrage over the theft of such a precious prop, with one user who was "so mad," proclaiming that "that thing should have been under surveillance 24/7 365."

Despite its six-figure valuation, many agreed that the costume is priceless. And thus questions of why the superhero's armor wasn't more carefully guarded permeated the collective consciousness. The second stage of grief in this case resulted in another major query: "How do you steal a whole iron man suit without anybody seeing you?" as another user tweeted.

With no other items reported missing — and no current suspects in the case which remains under investigation — the heist seemed like it very well could've been the work of Thanos, a villain portrayed onscreen by Josh Brolin. You know, if he wasn't a fictional character. And so began the conspiracy theories, as amateur sleuths began pointing fingers at suspects, both real and fictional, ranging from Thanos and Pepper (played by Gwyneth Paltrow) to Ryan Reynold's Deadpool, and even Downey Jr. himself.

For his part, Downey has played the character in nine Marvel movies altogether since his 2008 debut — though the costume has evolved over time. His most recent portrayal was in last month's megahit Avengers: Infinity War, and he's set to reprise the role in next year's untitled fourth Avengers film.

Whether or not it was a coping mechanism over the tragic theft, several users jokingly took responsibility for the crime in a series of false (or so we hope!) confessions.

The mysterious disappearance is quite literally a case of life imitating art. As fans may recall, villainous Adrian Toomes (AKA Vulture), who was played by Michael Keaton in last year's Spider-Man: Homecoming, attempted to intercept Iron Man's high-tech gear while it was all in transit from one Avengers facility to another. Unlike in this real life scenario, Spider-Man saved the day in this case, of course, and no Tony Stark valuables went MIA.

As the story of Spider-Man has reminded us, with great power, comes great responsibility. And though real life is very different from reel life, that hasn't stopped Twitter's own superheroes from listening to their own Spidey senses to get to the bottom of who stole the OG Iron Man suit. If nothing else, it would be a great plot for a future Avengers sequel.