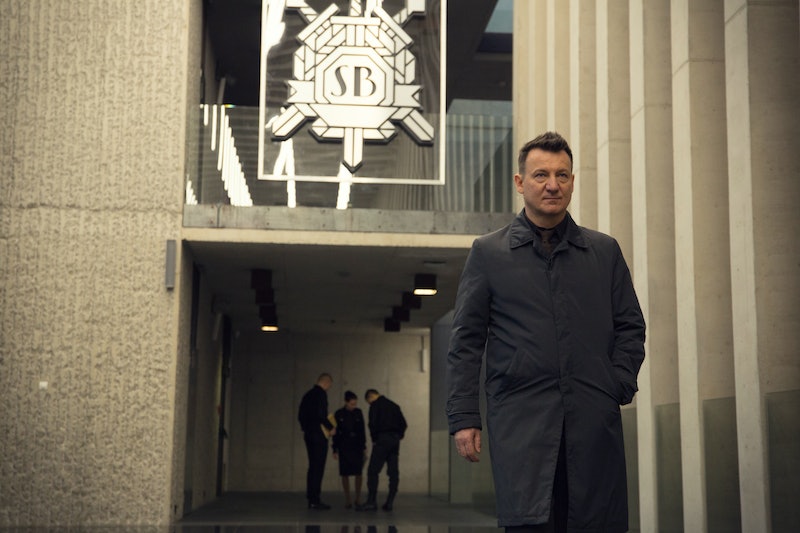 Imagine an alternate universe in which the Iron Curtain didn't come tumbling down in the late '80s. Instead, the Cold War-era Soviet Union maintained control in Poland, leaving the nation trapped in a police state while the rest of the world moved on. That's the concept of Netflix's first original Polish series, 1983, which is set to drop on the streaming service Nov 30. Of course, 1983 isn't technically based on a true story, but the alt-history thriller does feel like it's adjacent to a future that could have happened — if with some dramatic flourish.

Though the name of the show is 1983, the series is actually set in 2003, 20 years after a fictional terrorist attack halted Poland's liberation — meaning that, even two decades later, the country is still not a democracy. But even though the residents of this dystopian Poland might feel that the course of events that has kept them under the Iron Curtain was an inevitability, a fact of life, an unlikely pair soon uncover that this might not be the case at all.

According to Netflix's description of the show, "an idealistic law student and a disgraced police investigator stumble upon a conspiracy that has kept the Iron Curtain standing and Poland living under a repressive police state." What follows is an engaging, edge-of-your-seat thriller, as the truths that the pair uncover will change the course of the nation, and the world, forever... and maybe even lead to a revolution.

Though it's an original (and fictional) story, a thriller about the fight for a democracy has particular political relevance in Poland at this moment in the country's history. There has been widespread anxiety recently around Poland's perceived backslide into a form of authoritarianism, as the Law and Justice party has taken increasingly extreme measures to retain their hold on the government, from violating the Polish constitution by appointing new judges to the constitutional court, to turning the state's public broadcasting channel, Telewizja Polska, into a propaganda machine, according to The Atlantic.

The actions of the party have led to rampant protests across the nation, as Polish citizens struggle to protect the democracy that they worked so hard to achieve. So while yes, 1983 is technically a fictional story about Polish citizens in 2003 fighting back against a repressive government, it's one that will likely draw some comparisons to the events rocking the nation today.

There's been no word from Netflix about whether the show is meant to intentionally allude to modern day events. While speaking to Variety, Erik Barmack, VP of international original series at Netflix, only noted that he is "confident that this genre will not only resonate with the Polish audience but will also travel globally." But the best art, especially dystopian works, usually prompt viewers to think about their own lives and the world around them in a new light.

For viewers of 1983, it might be a relief to see a vision of the past they had escaped, but frightening to see what could still, potentially, be.