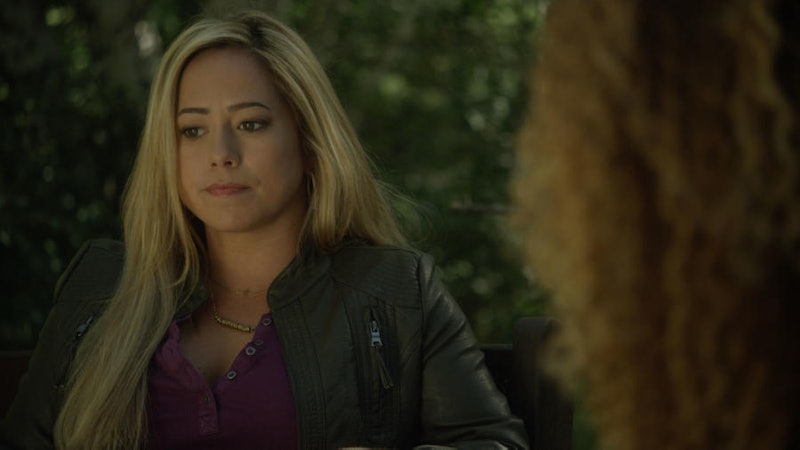 Some things just aren’t what they seem. For example, Lifetime’s new thriller A Deadly Dance might make viewers think its about what happens after a woman shares a dance with a secret killer or a high school party where things go horribly wrong. But, that’s not the case at all this time. A Deadly Dance isn’t based on a true story, thankfully, but the plot is an unexpected story full of twists.

Former Disney Channel star and Cheetah Girl Sabrina Bryan stars as Kate, whose twin sister Karen (presumably portrayed by Bryan as well) was tragically murdered by a person who got away. Kate is a professional dancer on a TV show and tries to go on with her life, but things go awry exactly one year after Karen’s death when Kate’s co-worker and friend Teresa winds up dead. Yep, there can never be just one murder in any Lifetime thriller — it's practically a rule at this point.

Now, security is ramped up at the set but Kate is still being harassed by this unknown person. She listens to her gut instinct and follows clues on set while the police work to find the perpetrator as well. But, she’s not sure if this person can be caught before her own life ends or someone else is killed. It’s absolutely a Lifetime premise with lots of murder and mayhem (and a little too much upfront information), but at least fans can watch this guilt-free because it is not a real story.

First, this police squad is due for a huge congratulations. They are the first police force in Lifetime thriller history to actually do something instead of leaving the protagonist to their own devices and showing up in the last 5 minutes of the movie. No one knows how helpful they will really be, but they get a gold star for at least trying to foil this killer's plans. Also, another death will certainly happen after someone who knows Kate confronts the killer by themselves and pays for their boldness.

And, it will be intriguing to find out why this person is centering on Kate’s life so much. Is it a jealous ex-partner or friend who wants to see her suffer after moving on and achieving her career dreams? Is this person someone who works on set and wants to somehow sabotage her life for their own interests? Or, is this simply a viewer who wants to eliminate everyone around Kate in hopes of making some strange obsession come true? This story could truly go anywhere, especially since it is a complete work of fiction. The real plot twist would be if Kate is actually the killer, which isn’t too far-fetched considering the types of stories that have built Lifetime’s brand.

So, wiggle your way out of those Friday night plans that you didn’t really want to do anyway and find out if Kate can crack the case before the cops when A Deadly Dance premieres on Aug. 23 at 8 p.m. ET.

More like this
Howard Stern's Net Worth: Is He The Richest Man In Radio?
By Hugh McIntyre
Superman & Lois Season 3 Will Introduce A Complicated New Supervillain
By Brad Witter
Everything To Know About True Detective Season 4
By Brad Witter
Only 3 Of The One That Got Away Couples Seem To Still Be Together
By Brad Witter
Get Even More From Bustle — Sign Up For The Newsletter