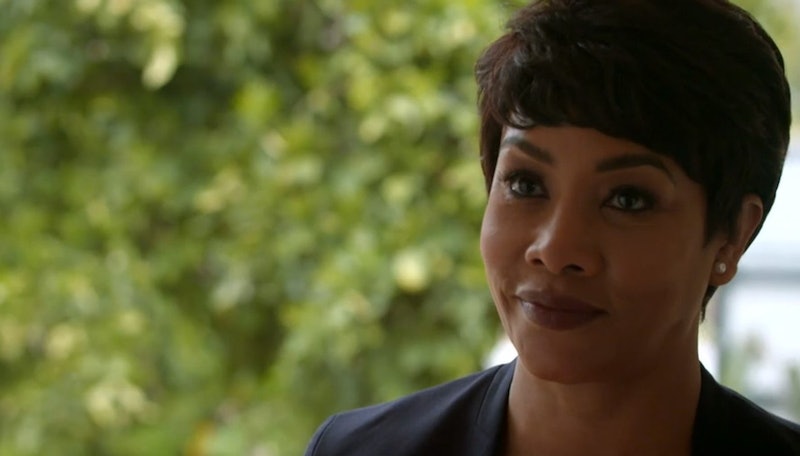 Vivica A. Fox has turned meeting the wrong person into a Lifetime gold mine with films like The Wrong Cruise, The Wrong Student, The Wrong Friend, and even The Wrong Teacher. Now, she's back with the latest installment in her Wrong franchise with The Wrong Boy Next Door, which no, isn't based on a true story, but is still filled with all the juicy details Lifetime fans can't get enough of.

According to Lifetime's description, the movie stars Calli Taylor as Katie, a troubled teen on house arrest who falls for John, her attractive new neighbor. Their relationship seems to be going well at first – until Katie suspects that John may not be such a good guy after all. It's sort of reminiscent of Shia LaBeouf's 2007 film Disturbia, in which a boy on house arrest comes to believe his neighbor is a serial killer. He wasn't personally dating the man, but he did start a fling with the new girl next door. So, it's basically Lifetime's (more dangerous) take on a similar premise.

The Wrong Boy Next Door's trailer jumps right into the action, showing John, who is presumably at Katie's house, asking her if they should take things upstairs. She replies that the couch will do just fine and they start kissing. Later, she spies on him working out, and he obviously catches her in the act because he arrives at her door almost instantly at her door sans shirt. However, things take a quick turn after John finds his "I'm a Lifetime man who kills people" hoodie and starts to stalk Katie in the middle of the day like a true creep.

An unseen friend asks Katie what she knows about John and she simply replies "the basics," which apparently doesn't include his stalker tendencies. But when John confronts her later and ominously says, "you will be mine," she punches him hard in the face, so while she may be clueless, she's not helpless. Afterward, Vivica A. Fox's character Detective Harper shows up at his door and they have a brief passive-aggressive interaction about what he could be hiding. It certainly fits well into the Wrong series as the latest reason why no one can be trusted in the Lifetime universe.

In celebration of all its Wrong films, Lifetime kicked off a "Wrong Summer Vacation" series with a string of new installments every Friday night, per E! News. Of course, Fox will direct and star in all of the movies, which includes titles like The Wrong Mommy, The Wrong Stepmother, and The Wrong Tutor.

"Remember back in the day how the ladies had romance novels and they loved to go and escape and it was like their guilty pleasure? Well, that's what we have with the Wrong franchise," Fox explained during an interview on The View.

So, if you love watching movies about the wrong people, don't feel bad about it because loving Vivica A. Fox will always be right. Find out if Detective Harper and Katie can take down John when The Wrong Boy Next Door premieres on July 12 at 8 p.m. ET.

More like this
What’s New On Netflix: Lana Condor’s Ghostly Comedy & A Sexy Reality Series
By Arya Roshanian
What’s New On Netflix: 'Stranger Things' & 'Mean Girls'
By Arya Roshanian
Here’s Everything Coming To & Leaving Netflix In July
By Grace Wehniainen
'The Undeclared War' Spotlights The Real-Life Threat Of Cyber Attacks
By Maxine Harrison
Get Even More From Bustle — Sign Up For The Newsletter