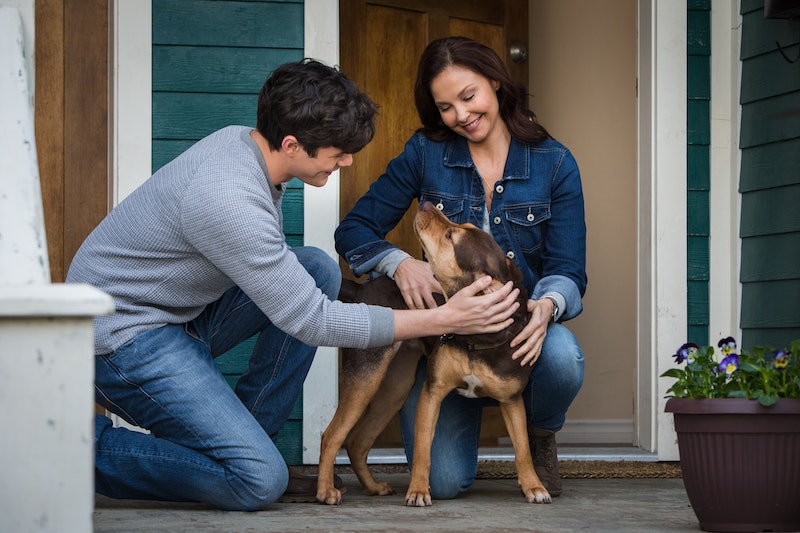 If you're looking for a tearjerker to kick off the new year, the new movie, A Dog's Way Home, out Jan. 11, may be exactly what you need. The new movie starring Bryce Dallas Howard and Ashley Judd follows a lost dog who travels 400 miles to get to her owner, and while A Dog's Way Home is not based on a true story, it will still make you sob as if it is.

The upcoming family movie is based on a 2017 novel of the same name which was written by W. Bruce Cameron, who also wrote the previously published the book A Dog's Purpose, which came out in 2010. As you might remember, that 2010 book also became a movie, called A Dog's Purpose. The 2017 film starred Josh Gad as the voice of one dog who gets reincarnated over the course of many generations. The dog in A Dog's Way Home is a different one, named Bella, and Howard voices the narrator as she embarks — no pun intended — on a long and treacherous journey home.

A Dog's Way Home isn't based on a true story, but there are real dogs who've gone the distance to return home to their owners. You can find heartwarming stories all over the web about dogs who have traveled tens of miles to get home after being lost. A few articles, like this one published by People, even recount stories of dogs traveling hundreds of miles to get home, like Bella does in the movie.

As you can imagine, it's hard to know exactly what happens in a dog's journey to return home after they're lost or separated from their owner, even if you have a tracking chip implanted underneath their fur. A Dog's Way Home uses a lot of creativity to portray Bella's doggy adventure, and it will probably remind you of another classic animal movie: 1993's Homeward Bound.

There are a lot of similarities between Homeward Bound and A Dog's Way Home, as both include run-ins between domestic animals and wildlife. Both A Dog's Way Home and Homeward Bound also involve the lost animals saving a person's life while they make their way to their people, so if you were a fan the '90s family movie, you'll probably appreciate the new film even more.

Like Homeward Bound and A Dog's Purpose, the new dog-narrated movie will probably be an emotional experience for you, especially if you're an animal lover. If you're concerned about whether or not your heart can take it, you might want to check out A Dog's Purpose before seeing A Dog's Way Home. Cameron's tale of dog reincarnation might give you a new sense of hope in how a dog's love endures over time.

Fortunately, A Dog's Way Home isn't so much about a dog leaving its family for good, because Bella does whatever she can to get back to her owner, Lucas. Just thinking about it is probably enough to make you run home to hug your own furry source of unconditional love.