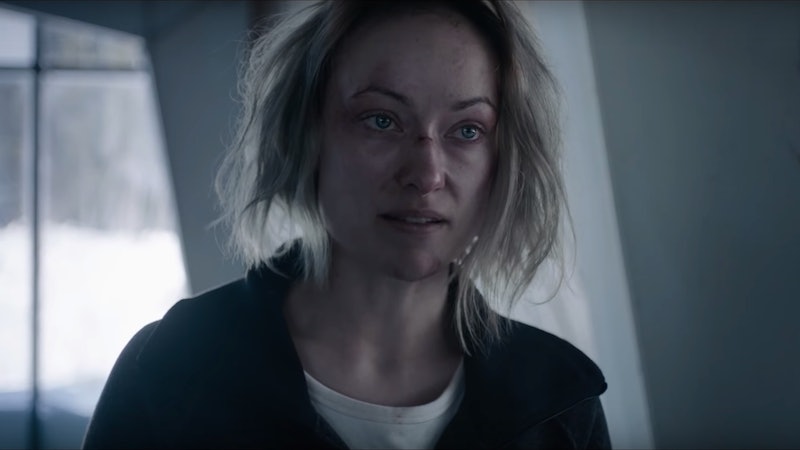 On demand and in select theaters Mar. 29, A Vigilante stars Olivia Wilde as Sadie, a one-woman vengeance squad out to brutally sever abusers from their victims' lives. She doesn't set out to kill her targets, but instead does her best to take from abusers and give survivors the resources they need: Usually, money, strength, and a clear way out. But Sadie's many costume changes, krav maga skills, and fierce determination are rooted in her own trauma. A survivor of domestic abuse herself, she wants to help others while she hunts down her husband. But is A Vigilante based on a true story? According to both the film's star and writer-director Sarah Daggar-Nickson, the idea sprang from an enormous body of stories showing perseverance and hope.

Speaking to Deadline, Daggar-Nickson was clear about her inspiration for the film. "Even before I created A Vigilante I've always been awe-inspired by the strength of domestic abuse survivors, and with A Vigilante I just really wanted to write and create a genuine, badass hero in tribute to them, and through that explore these extreme stakes and consequences — emotional, physical, financial — that are real for so many people in this situation," she said. She hasn't publicly gone into specifics about what kind of research she did or whether any specific stories drove the plot.

Wilde echoed the filmmaker's sentiment in a Feb. 14 Instagram post, writing, "This movie almost broke me. We made it for the survivors of domestic abuse. They educated me and I did my best to honor their courage." The actor didn't elaborate what that education looked like or what resources she used to prepared.

But her character goes to the limits to free the abused, training herself to fight back and setting up elaborate stings with disguises and false identities. We don't just see the satisfying moments of her punishing abusers, we follow her outside of her mission, where she's clearly still working through her own pain, suggesting everything she's doing might be as much to distract herself as it is to help others.

Daggar-Nickson pushed herself as well. Speaking to the AU Review, she said that the film came together in a shockingly speedy manner from its inception. "It was actually about two and a half years ago," she said. "It was actually pretty quick; within about a year I gave it to Olivia and she really responded to it, and then we went into production."

A Vigilante is the rare revenge movie starring and written/directed by a woman. Often, even if revenge films feature a female lead — such as Kill Bill or Ms. 45 — they've been driven by men behind the scenes. The trend seems to be shifting though. 2017's brutal, starkly titled Revenge, about a young woman who exacts revenge on the men who left her for dead, was also directed by a woman (Coralie Fargeat). In this case, Wilde's involvement likely opened doors normally closed to first-time writer-directors, especially women.

But Sarah Daggar-Nickson only seems to have popped up out of nowhere with A Vigilante. Her IMDB page lists only four writing credits and three directing (including shorts), but as she points out to AU Review, it took her six years of hard work and determination to get to the point where she could manifest a feature-length film. "You have to be strangely obsessed," she said. "I think it's just something you have to enjoy doing."

While the subject matter of a movie like A Vigilante isn't something that many would call enjoyable, taking an opportunity to share others' stories — particularly the raw, painful stories that are hidden, overlooked, or just don't get told — can be uplifting.

On the movie's SXSW premiere carpet, Daggar-Nickson told Houston Film Fanatics the one thing she'd most like people to take away from the film. "If you are in an abusive situation, don't stay silent," she said. "Reach out for help, help is out there. And if you are a survivor, you are an incredible, strong, amazing person."