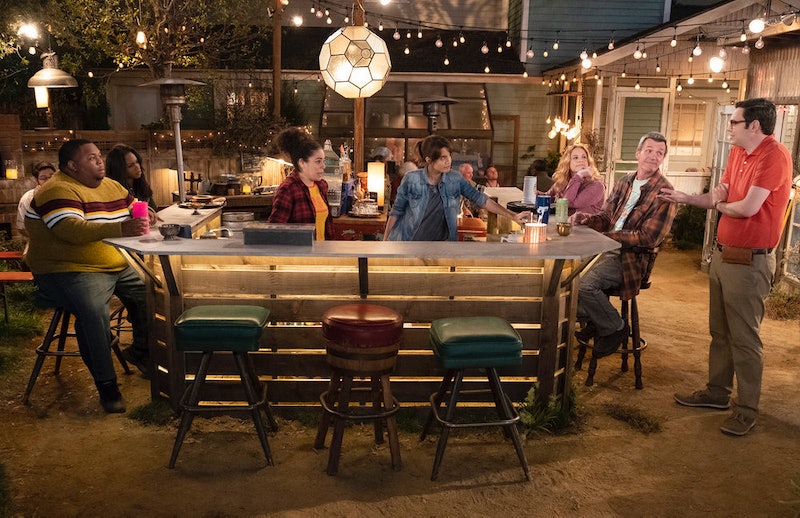 Abby's, NBC's new sitcom starring Natalie Morales, will make you want to visit its titular bar — a laidback, backyard speakeasy where everybody knows your name (hi, Cheers) and cell phones aren't allowed. Unfortunately, Abby's isn't based on a true story, so you can't actually go. Unless, that is, you happen to know a secret bar that even the internet doesn't advertise, because googling "unlicensed backyard bar" only returns results on Abby's.

That being said, much of the show's story is culled from real life. "There's quite a bit of inspiration from all the writers' lives, and our lives, and [executive producer Mike Schur's] life," Morales told Bustle in a recent interview. "A lot of the interactions are based on things that have happened to Mike Schur, or [creator Josh Malmuth], or our writers' group, or me, or the other castmates — not all of it, obviously. But a lot of it."

And as Malmuth explained to GBR, the premise is designed to at least feel real, even if it isn't. "I think that sitcoms really at their core are this place where a bunch of characters want to spend time together, but then also you as a viewer want to hang out, you know?" he explained. "When I was thinking about what kind of show I'd like to make, I wanted to boil it down to that essence, right? It's just a bunch of people in a room talking to each other, and hopefully you enjoy the characters and interaction enough that you also want to be in that room, too."

Plus, Abby's will remind you of another beloved sitcom: Cheers. Think of it this way: if Parks and Recreation is Schur's take on The West Wing and The Good Place is Schur's Lost, then Abby's is his Cheers. It honestly and truly looks just like it, from the the set itself to the pre-show announcement that Abby's is taped in front of a live (outside) audience — something that Cheers reminded us of every week.

Fans could even draw parallels between the Abby's characters and the classic Cheers' regulars: Beth would be Carla, Fred would be Norm, James would be Cliff, and Rosie is basically Coach. That leaves landlord Bill and bar owner Abby as Sam and Diane, respectively. But while Malmuth and Shur knew there'd be Cheers comparisons before even making the show, they insist Abby's isn't trying to usurp that legacy.

"When Josh and I were beginning to plan the show we were acutely aware, no matter what we did, it would be seen through the filter of Cheers," Schur said at a Television Critics Association Q&A, according to Deadline. "There is no way to beat that show. If you can get in the conversation with that show it's a dream come true."

Ultimately, Abby's is an original story that uses a classic setting and format to tell new jokes. If you hear about any bars that are as welcoming (yet strict in, like, a fun and quirky way) — spread the word!

More like this
Is The Serpent Queen Based On A True Story?
By Maxine Harrison
'Killing Eve' & 'Doctor Who' Stars Just Joined The Cast Of 'True Detective' Season 4
By Brad Witter
'House of The Dragon' Episode 6 Will Take Place A Decade After Episode 5
By Kadin Burnett
'The White Lotus' Season 2 Finally Has A Release Date
By Bustle Editors
Get Even More From Bustle — Sign Up For The Newsletter