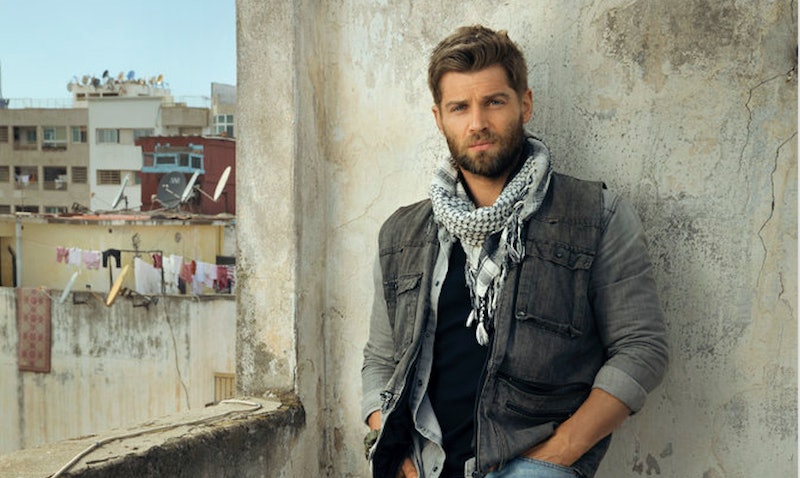 Joining the stream of recent military-themed series is The Brave, a new NBC drama that chronicles the valiant efforts of America's most elite undercover operatives. At the center of the show is Captain Adam Dalton (Mike Vogel), a former Delta force operator who leads a team of highly trained specialists through high stakes missions in some of the world's most dangerous areas. It's an exhilarating tale, and one that's not all that far-fetched, so it's only natural to wonder if The Brave's Adam Dalton is a real person.

Creator Dean Georgaris hasn't said explicitly if he based any characters on real people, but he did say in a recent interview with TV Line that he came up with the concept after watching documentaries about American Special Forces as a kid. "I was continually impressed with their ingenuity. I was continually impressed with their resiliency,” he explained. “I would read story after story where the missions almost sounded like episodes of Breaking Bad, in that what started off with one simple decision leads to all these complications.” It's likely, then, that he drew inspiration for Dalton from an amalgamation of the people featured in those films, focusing on heart, not just heroics. As Georgaris told Entertainment Weekly:

When it came to crafting his own narrative, he turned to real military men and women for guidance, discovering that while there is a lot of drama, it's (unsurprisingly) not the "A-ha, I’m really your brother" or "I’m a spy in disguise!" plot points often seen on TV. Rather drama is rooted more in the Murphy's Law-type stumbling blocks like a faulty gas gauge that reads full but is actually broken, leaving its driver stranded in the desert to figure out another path. And that's what Georgaris aimed to show. "The fact that in real life these men and women are able to just deal with, just pivot on a dime under pressure, I find that so inspirational," he told EW. "The goal is to sort of show how they’re not superheroes, they’re just sort of enhanced versions of us."

Only one episode into the series, not much is known about Dalton, though Georgaris teased in the same TV Line interview that his connection to Patricia Campbell — who oversees the Defense Intelligence Agency from its D.C. headquarters — may be deeper than initially meets the eye. Perhaps as his backstory unfolds, more ties between Dalton and real life figures will emerge, but for now he's a strictly fictional character.

Based on Georgaris' comments, however, Dalton — and the rest of the cast for that matter — should still feel real. He's an everyman who just so happens to save lives on a weekly basis, not some distant, superhuman global guardian. Should he be inspiring? Hell yes, but Georgaris opting to put him up against commonplace challenges rather than sensational twists is exactly the appeal. He's an average guy pushing himself to his limits for the good of the world, just as real life military personnel do all the time. Dalton, then, isn't based on any one single person, but on the many service members that fight for our country every day, and that universality will make him more tangible than any single story ever could.