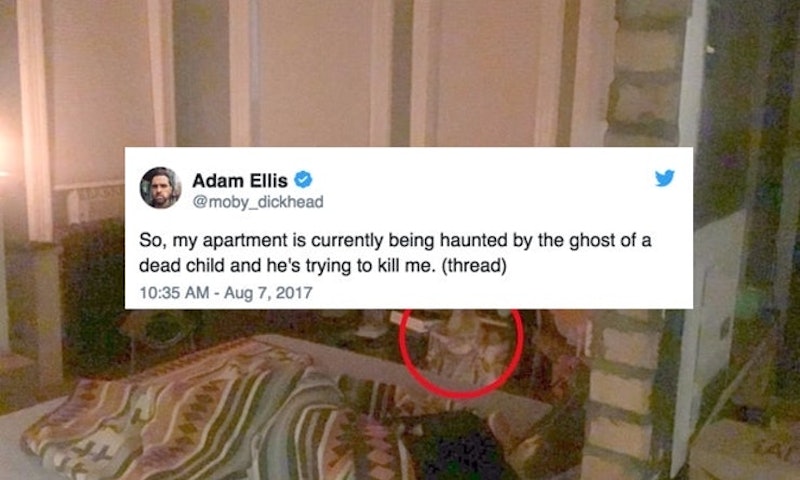 If you've been following the Dear David saga on Twitter, then the latest tweet likely has you on the edge of your seat. After Adam Ellis' most recent Dear David update on Jan. 28, a mysterious video of his cats posted without context, people were convinced that Dear David had possessed Ellis, and spent the next few days waiting for more information. In the early morning of Feb. 3, Ellis posted another horrifically cryptic tweet that has his followers further concerned for his safety.

Ellis's tweet simply reads, "everything is fine," and he gives no further details, which, as was the case with the cat video, is not how he usually updates his followers about Dear David. (He usually posts in threads, with detailed information, which these two cryptic, one-off tweets mark a departure from.) People are worried that everything is not fine. If you're not in the know, and you love everything creepy, then you're going to be obsessed with Dear David.

Ellis, a New York City-based writer and illustrator, began tweeting about being haunted by the ghost of a young child with a dented head in August of 2017. Creepy AF doesn't even begin to describe this story. As the nighttime hauntings increased, Ellis's cats began to behave strangely, and he started documenting the incidents with photos and video of the apparition that appeared almost nightly in not only his dreams, but in his apartment as well. Even if you don't believe in ghosts, the mounting evidence that Ellis is indeed being stalked by a demonic pint-sized spirit is hard to ignore.

Creeped out yet? This has actually happened to me. Like Ellis, I lived in a historic apartment building. And, like Ellis, I moved to a higher floor in the same building. That's when weird things started to happen. Two nights in a row I awoke at 3 a.m. to my dog barking at a shadowy figure that appeared to be hovering outside of my bedroom doorway. If it weren't for my dog also seeing the "ghost," I might have just chalked it up to my mind playing tricks on me.

While I knew that my apartment building was known for being haunted by a former resident, actor Mae West, I hadn't heard of any other hauntings. Though residents of West's former apartment have detailed strange incidents in apartment 611 where West lived for 50 years. My new apartment was located on the same floor as West's, and seeing the apparition two nights in a row was enough to convince me that West wasn't the only dead resident still living in the building.

Unlike Ellis, after talking to a friend who is an intuitive, I immediately did a cleansing ritual, changed my bedroom around so the bed did not face the door, and asked the ghost (out loud) to leave. My friend told me that when ghosts or spirits present themselves to you they are usually looking for help. I did not want to help this ghost, and I made it clear. After I did what my friend suggested, the hauntings stopped.

I also spoke with an animal communicator who told me that my dog spent a lot of time in the apartment communicating with a sad old man. So, even though I stopped seeing the spirit, my dog didn't. Ahh! Because Ellis has been actively engaging with his ghost, known as Dear David, his hauntings have not only continued, they've gotten increasingly aggressive. And, his latest tweet has people worried.

What does this mean? Has Ellis finally gotten Dear David to leave him alone, or has Dear David actually taken over his Twitter account? In January Bustle writer Lucia Peters reported (in an article that details the entire Dear David saga to date) that Dear David appeared to hack Ellis's Instagram account in early 2018.

The deviation from how Ellis usually writes his tweets has some Twitter users speculating that this tweet is actually not from Ellis.

And, Ellis usually gives Dear David followers clear information about his most recent creepy experiences with his uninvited spirit roommate.

Some users are speculating that perhaps Dear David has left Instagram and indeed taken control of Twitter instead.

Maybe Dear David has finally had enough of Ellis ignoring his pleas and has figured out that Twitter is the best way to appeal to the ghost-obsessed masses.

Or, Ellis could even be possessed by Dear David. After all, The Exorcist is based on a true story.

In case you missed earlier Dear David tweets, this is one of the images that Ellis captured in his apartment.

Seriously, we need the ghostbusters right now. Does anyone have their number?

Until Ellis, or Dear David, gives us more information, all we can do is let our imaginations run wild. While some people are convinced that Dear David is nothing more than an elaborate hoax, their concern for Ellis is very real.

I don't know if the NYPD does wellness checks for people potentially possessed by demonic spirits, but someone needs to check on Ellis ASAP. For now, it appears that all we can do is wait. Stay tuned my fellow spirit chasers — I'm sure there's more to come. Because, this can't be how the story ends.