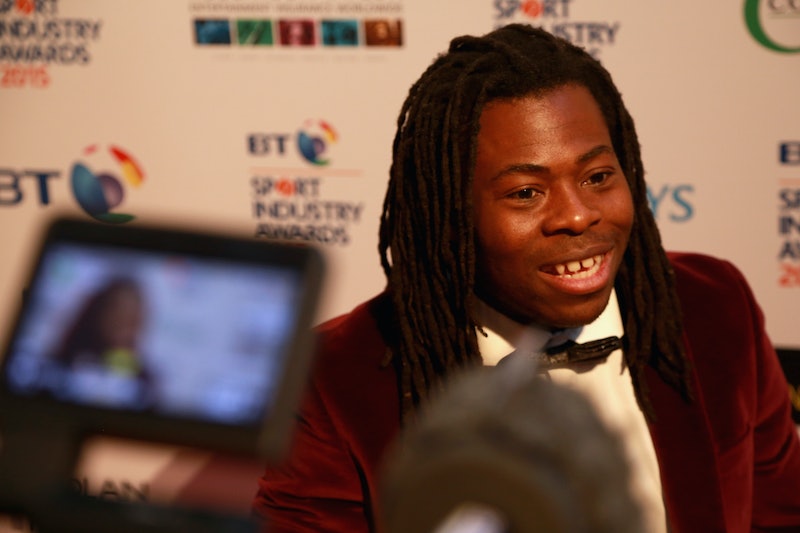 Ade Adepitan is a British TV presenter and wheelchair basketball player, and a very inspiring character. If you need a refresher: the TV star got his start on the CBBC show Xchange alongside Holly Willoughby, and has been a regular presenter on the BBC ever since. He also won a bronze medal at the 2004 Athens Olympics as part of the British wheelchair basketball team. But is Ade Adepitan married?

Ade got married in August 2018, and his wife Linda is famous in her own right. According to Hello! Magazine the newlyweds had to postpone their wedding and a very showbiz reason. Linda is a singer, and goes by the stage name Elle Exxe. The couple had to postpone their wedding because Elle Exxe was invited to perform V festival, which is a pretty huge deal for any performer. According to Hello! Elle Exxe told her fans at V Festival "the venue was booked. Everything was booked. Everyone was really understanding. We've re-booked. The wedding's still on."

If you're into electro pop, Elle Exxe is your girl. Her latest track "Queen" is a total feminist anthem and was released in honour of International Women's Day 2018. Exxe said of her song: "I remember thinking about some of my girl friends who lost their hopes and dreams at the hands of abusive men. I hope that ‘Queen’ will help empower people to take leadership over their lives and dare to dream again." The song is full of empowering lyrics like "I will not go down, I will earn my crown and make my sisters proud, I'm the Queen of my own destiny". Definitely a pick-me-up song when you're feeling a little low.

Speaking to the Guardian, Ade described his proposal to Elle Exxe. He said "I took her to Lake Como and the hotel staff set up a table with champagne, strawberries and candles. When I pulled out the ring she said: 'I don’t care if you are in a wheelchair, you still have to get down on one knee.'" My heart.

The way the two met was equally romantic (and a little showbiz). The couple told the Times that they met at the National Television Awards at the O2 arena, with Ade saying: "I spotted her in the corner of the room — she had this amazing smile and a beautiful aura, so I made a beeline." Elle Exxe recalls their first encounter slightly differently, saying "his opening line was 'Those are really cool tights.'" The singer said: "I thought: 'That’s the strangest compliment I’ve ever heard from a guy.' I've never met a man like him." It looks like the tights line must've worked.

TV presenter Ade was born in Lagos, Nigeria, the BBC reports, and his African ancestry has no doubt provided some of the inspiration for his new show Africa With Ade Adepitan. The show aims to shed a positive light on Africa, far away from the stereotypes and misconceptions it has accrued. Elle Exxe hails from Edinburgh, The Skinny reports, and Hello! described their wedding as a celebration that "brought together two families, two cultures, and two countries." They might just be my new favourite couple.

More like this
Even The Royal Family Can’t Get Over Alessia Russo’s Backheel Goal For England
By Maxine Harrison
Everything You Need To Know About The 'Big Brother' Reboot
By El Hunt and Maxine Harrison
Vick Hope Had A Very Relatable Reason For Turning Calvin Harris Down
By Sophie McEvoy
Talking About Mental Health In Sport Is Crucial, Says England Legend Karen Carney
By Sam Ramsden
Get The Very Best Of Bustle/UK