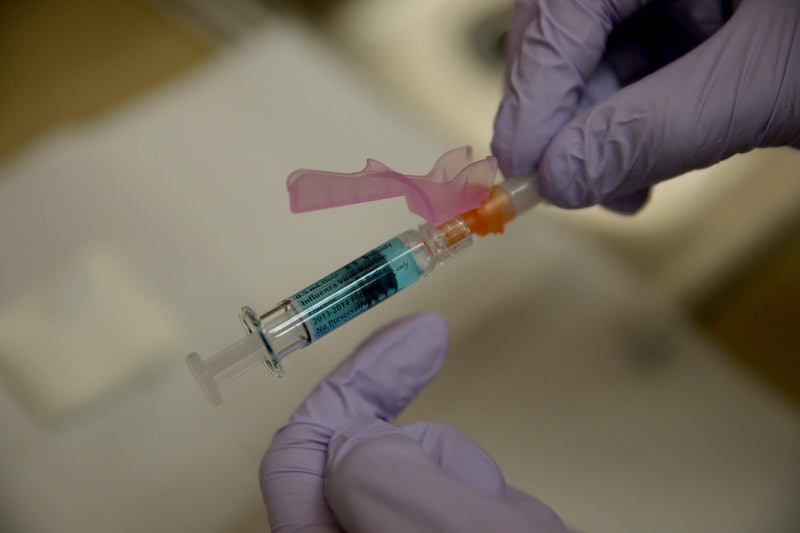 With the flu epidemic getting worse and worse every day, it can be easy to forget that there are other illnesses out there worth paying attention to. Like, for instance, adenovirus: a virus with symptoms very similar to the flu. It's spreading through the country more than usual, and the symptoms can range from mild to severe. Adenovirus has caused deaths in the past and can lead to serious complications. All of this has left people with one major question: is adenovirus contagious?

The symptoms of adenovirus can sometimes be mistaken for the flu. They include basic cold symptoms, fever, sore throat, and diarrhea. More serious symptoms include bronchitis, pneumonia, bladder infections, gastroenteritis, and pink eye. In the worst cases, the virus can even cause neurologic diseases, like encephalitis (inflammation of the brain) and meningitis (inflammation of the tissues surrounding the brain). These are really rare and the Center For Disease Control says only people with existing respiratory or cardiac disease, infants, and people with weakened immune symptoms are likely to experience the most serious symptoms.

Just like the flu, it's not common for adenovirus to cause death in most people, and outbreaks aren't very common either. But, there are exceptions — and considering the virus mimics the flu so much in its symptoms, it's important that people are aware when these outbreaks occur so they can be sure they're being diagnosed with the right illness. According to CNN, there have been two deadly outbreaks in Oregon in recent history. One in 2007 led to seven deaths, the other in October 2013 and July 2014 led to five deaths. In most cases, though, the CDC says adenovirus is mild, with symptoms lasting about five days. It can typically be treated with home remedies and over-the-counter medications, which is good news — don't freak out even if you do catch it.

And, yes, adenovirus is contagious. It's spread by coughing and sneezing, direct contact with an infected person, or touching objects and surfaces (like door handles) where the virus can live and remain infectious for a long period of time. Unlike the flu, adenovirus is not seasonal - it can cause infections all year long.

Unfortunately, adenoviruses are hard to fight. They're resistant to may common disinfectants. CNN says you might need a cleaner with "virucidal" activity, like bleach. Another annoying thing about this pesky virus? They can "stay stable at room temperature for weeks" on unclean surfaces.

So how can you prevent it? The usual: avoid people who are visibly sick with cold symptoms and pink eye. Wash your hands frequently and avoid touching your face. Carry around hand sanitizer, and make sure to wash your hands after you touch something communal like a door handle or a subway pole. There's really no other way to avoid getting it — short of moving into a bubble for the rest of flu season, but alas, that might make living life a little difficult.

There's no need to freak out over adenovirus, but it is definitely worth keeping in mind. Remember: flu-like symptoms don't always mean you have the flu, which is why it's important to head to a doctor as soon as you start to experience symptoms. Good luck out there!