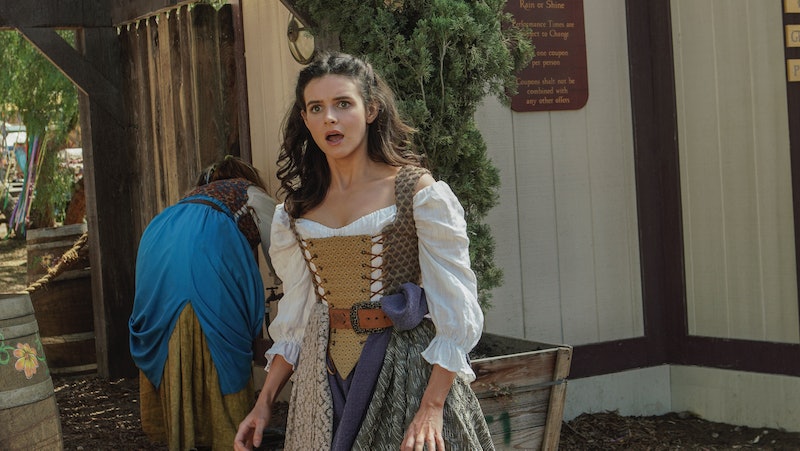 Lifetime's new dramedy, American Princess, follows the fish-out-of-water story of Amanda, an Upper East Side socialite who crash lands at a Renaissance faire after running away from her wedding. It's an intriguing, if highly specific, premise, which makes sense given the context: Amanda from American Princess isn't based directly on a real person, but she was inspired by creator Jamie Denbo's own experience working at a Renaissance festival. And Denbo has made sure that Ren faire employees, like Amanda and her friends, aren't seen as a joke.

Amanda was an English major at Vassar who now works as a writer for upscale lifestyle websites (there are Goop jokes galore in the first ep). She lives a swanky Manhattan life with her controlling mother and unhappy sister. But when she discovers her fiancé cheating on the day of their upstate New York wedding, she flees and accidentally ends up at a Renaissance faire, where she decides to trade in her "American princess" status to become a Renaissance festival wench.

Denbo discussed with the Jewish Journal that she shares some general characteristics with her American Princess character, as they are both college-educated women from traditional Jewish families. But Denbo had a middle class upbringing in Boston, not an upper class one in New York. And the way she landed at New York's Sterling Renaissance Festival was a tad less traumatizing than what Amanda goes through.

"I wound up at the Renaissance festival by mistake. I thought I was auditioning for Shakespeare in the Park," Denbo told the New York Post. "This was before Google. I got a callback to what looked like Shakespeare in the Park from the brochure and got the job and drove six hours north to Lake Ontario outside of Syracuse and wound up at the Sterling Renaissance Festival. I got there and I was completely blown away by this whole other layer of life's onion that was like, 'People live like this? This is a lifestyle?'"

Denbo joined the real-life Ren faire back in 1995, and she told the Post that she's wanted to make a show based on her time there for 25 years. "It's inspired by a true story so it doesn't seem that out of the box to me," Denbo said. "But I guess it is."

In an interview with Entertainment Tonight, the Orange Is the New Black and The Heat actor further explained that she hadn't expected her time at the Ren festival to be so life-altering. "I thought to myself, 'This is going to be a little turn,' and then I wound up exploring a world I did not know existed. I was exposed to a level of commitment and to community and nerd-dom and a little bit of fetishism and a little bit of love."

And Denbo used her time working at the real-life Sterling Renaissance Festival to shape the other characters besides Amanda, too. "It's one of the last vestiges of communal gypsy, nomadic life that exists in this country. It's a really special place with a lot of really talented people and a lot of f*cking crazy people, but you can say that about every business," Denbo told ET.

At the end of the Elizabethan day, Amanda is, essentially, a proxy for Denbo. Because even though she wasn't cheated on and didn't leave a swanky lifestyle to join the Ren faire, her experiences there changed her forever. "[It] was ridiculous and delightful, such a funny place. I loved it so much," Denbo told the Jewish Journal. "It changed the course of my life." Just like it will change Amanda's in American Princess.