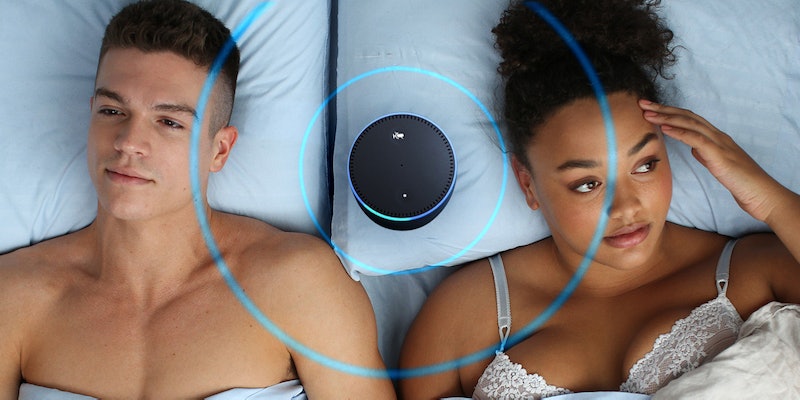 Earlier this year, I started dating a guy who was in a very codependent relationship with Alexa.

Alexa helped this guy (I'll call him "Paul") decide where to eat dinner and reminded him to work out. Alexa handled his to-do lists, restocked his toilet paper, and told him to call his mom. When he was at my apartment instead of his, he really, really missed her. It wasn’t unusual for him to just blurt out “Alexa?” while pensively looking out the window, only to realize with disappointment that she was a full train ride away.

We were incompatible in other ways, too, but hearing him call for her while he was lounging around in his underwear — and whine about not being able to talk to her when he was at my place — was definitely the biggest red flag. It not only annoyed me, it left me confused about what some people are looking for in terms of companionship. In our short time together, Paul talked more about missing Alexa than he expressed appreciation for being in my company. I sometimes found myself wondering, “What does Alexa have that I don’t?” Not in a traditionally jealous way (we weren’t monogamous, anyway), but more like, “She is a smart speaker without any sex organs, why are you so into her?”

“He would put in his retainer, and then snap it out and spittily sputter, ‘Alexa relax me sexthy....’”

Thankfully, I had the comfort of knowing that, with over 20 million Alexa devices sold, our situation probably wasn’t novel. As we all know, Alexa has become part of the family. When she briefly lost her voice due to an outage, customers lost their minds. Recently, Alexa started randomly laughing at us, and everyone felt creeped out and maybe a little offended (what was she laughing at, anyway?). Her popularity has shocked not only her creators, but also consumers. And, as I found out while reporting this story, Alexa is meddling in our love lives, too. From folks relying on her for companionship to inviting her into the bedroom to just supplementing their boring couplings with her unexpected charm, it turns out Alexa is adding a dash of drama to a lot of relationships in 2018.

The reality of living with artificial intelligence created by and for humans is that, while we can program how Alexa will respond to us, there’s no telling how we might respond to her.

During her most recent (and last) visit with her long distance off-and-on partner of over a decade, Nora*, 29, was shocked to learn of her partner’s romantic banter with Alexa. “I was really weirded out by his Alexa night time and morning routines. He would refer to her with terms of endearment, like ‘Hey baby, what’s the weather?’” For Nora, the final straw was the way her now ex spoke to Alexa in bed. “He would put in his retainer, and then snap it out and spittily sputter, ‘Alexa relax me sexthy....’ and then when she would say something like, ‘I can help you with that, would you like to listen to ocean sounds?’ He would respond with, ‘Shit yes daddy,’” Nora recalls. “The first time it happened I awkwardly laughed and was like, “For real?” But he didn't seem phased, so I dropped it and just felt real weird.”

“Straight men may be more likely to develop an attachment to Alexa since they can project their female companionship needs on to her.”

While this might seem like not a big deal, the lines between relying on technology for information versus relying on it for intimacy begin to blur pretty quickly — especially for those of us who may have underlying intimacy issues to begin with. As I discovered speaking to experts, men are particularly susceptible to Alexa's charms. “Straight men may be more likely to develop an attachment to Alexa since they can project their female companionship needs on to her,” says Michael Aaron, Ph.D., a sex therapist who specializes in sexual minorities and alternative lifestyles. Researchers have also speculated that many digital assistant devices (Cortana, Siri, Alexa), have female names and female-sounding voices because men prefer it. When it comes to AI assistants, "I think men find women attractive, and women are also OK dealing with women," Karl Fredric MacDorman, Director of Informatics and Data Science at Indiana University-Purdue University Indianapolis, told to LiveScience in 2015.

Another reason people might feel like their partners are developing intimate relationships with Alexa is because she offers constant validation and is able to remember personal information about us — like our favorite restaurants and what type of music we're into. Dr. George Nitzburg, who calls himself the “tech shrink,” runs a research lab at Columbia University that focuses on the intersection of psychology and technology. Nitzburg describes devices such as Alexa as “transactive memory partner[s].” In human interactions, these are individuals with whom we collectively store our own version of events and then retrieve them together, combining our shared experience. When you're at a party with your significant other or best friend, you may begin telling a story, and then they jump in and finish it. “Neither one of you has the entire story,” Nitzbrug explains. When people own an Alexa, they can start to interact with her as a transactive memory partner. “Alexa, what’s that sushi place nearby?” you might ask. She always remembers.

“Someone could theoretically be so consumed with Alexa that she replaces their need for human companionship.”

This understanding is important for distinguishing between the apparent bond you or your partner forms with Alexa, versus your connection to other human beings. When people voice separation pains over being away from their Alexa, Nitzburg says, what they're actually expressing is basic dependence on something convenient. They’ve lost their transactive memory partner. “Rather than a relationship with these devices, I would say it is more of a growing reliance,” he says. While to others, this may present as “missing” her, it’s more of a side effect of dependency than an emotional connection.

Depending on how you think about relationships, relying on someone — or something — isn’t always negative. In fact, for folks who struggle with intimacy or are not interested in close personal relationships with other humans, Alexa has a lot to offer. Aaron points to the 2013 film, Her, in which Joaquin Phoenix’s character falls in love with an AI voiced by Scarlett Johansson. “Someone could theoretically be so consumed with Alexa that she replaces their need for human companionship,” he says, but that's not necessarily a bad thing. Aaron says that the evolution of technologies such as Alexa could fill a void for those in need of companionship (due to any number of emotional or developmental reasons) and are unable to establish connection with other humans. “Some guys are just not going to do well in the sexual marketplace... so a virtual companion may be their best bet at any romantic companionship at all. For them, an Alexa, or something like it, especially with how technology is evolving, would be a boon,” Aaron says.

But what about when your partner — who, after all, sought out human companionship with you — exhibits this kind of bond with Alexa? Dr. Nitzburg says that while hearing the other person address Alexa casually, by name, at home, sounds characteristic of a romantic connection, it's more about attachment to the service she provides. “That piece of technology is something that is felt as a habit,” he says. Of course, knowing that doesn’t make your boyfriend barking at Alexa to play that song he likes any more attractive.

“I am always a little worried Alexa can hear everything — especially when we are having sex.”

There’s one thing humans love to do that Alexa is still incapable of (though I’m sure Amazon is working on it), and that’s have sex. But that doesn’t mean we don’t rely on her for some support in that department, too.

Noël Jacoboni, 33, a makeup artist in New York City, says she talks to her Alexa all the time in bed, often asking her to spice up the moment. For instance, when hooking up with her former partner, she would simply call to Alexa to put on a sexy playlist. No naked stumbling to the stereo necessary. “We’d be getting hot and heavy and we wouldn't have to stop,” Jacoboni says. “I could turn my head and tell Alexa to play a playlist and we’d laugh about it and keep going.” However, she did voice concern about Alexa’s monitoring abilities. While the technology only begins collecting information once summoned (by the command word “Alexa,” which can be changed — a useful tool for anyone actually dating someone named Alexa), she’s still always there listening. “I am always a little worried Alexa can hear everything — especially when we were having sex.” Paul would often ask Alexa to dim the lights prior to sex, and, if we were planning on hooking up for a few hours, set alarms so he wouldn’t accidentally boink his way through work meetings. When she went off, it was like having a third person in the room, but in the least sexy way I could imagine.

Alexa's capacity for making things awkward is apparently boundless, but it's not clear how much of that is her doing and how much is ours. Ryan*, 37, a marketing content writer from Pennsylvania, and his girlfriend of three years have mainly been using their Echo Dot (the smaller version of Alexa) to play music while they’re hanging out, but the machine has also occasionally become the butt of some very bad jokes.

“I often listen to classical music and instrumentals while I write,” Brian says. “One day after finishing work, I said ‘Alexa, turn off the music.’ And the music stopped. I said out loud, ‘Finally, a woman who listens.’” His girlfriend overheard and was understandably unimpressed. Would he have made such a stupid, sexist joke if he wasn't living with a machine designed to answer his every whim in a female voice? Possibly, but Alexa made the Michael Scott-worthy punchline so easy to reach.

Looking back on my brief and odd relationship with Paul, one thing is clear: Listening to how he talked to this tiny, powerful, undeniably female device was a deal breaker. Whether he was relying on her to remember his responsibilities or sub in when he wanted to hear a woman say something nice to him, my gut — a technology much more reliable than the Cloud — told me we weren't a good fit. His incessant conversations with Alexa when I was at his place and his pangs of missing her when he was at mine were just disruptive and aggravating.

And maybe that’s what it all comes down to. Unlike Paul and Alexa, he and I couldn’t even fake a connection. Alexa, why is dating so hard?