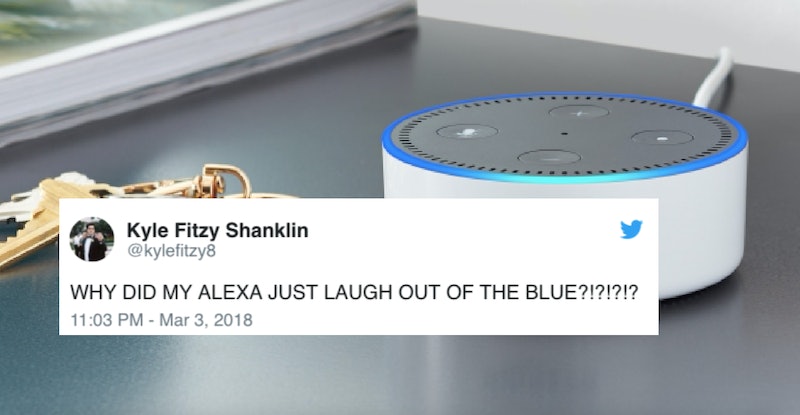 If you weren’t already worried about the robot revolution, Skynet, the singularity, or the AI uprising, you might be now: Some people are reporting that their Amazon Echo devices are randomly laughing, speaking, and performing other actions — totally unprompted by their users. In some ways, this turn of events actually isn’t all that surprising; it mostly has to do with how the devices work in the first place. That doesn’t stop it from being unsettling, though, because… well, no one likes to hear disembodied laughter echoing throughout their house when they’re alone at night. (Bustle reached out to Amazon for comment, and will update upon response.)

UPDATE: In a statement to PC Mag on Wednesday, an Amazon spokesperson said, "We're aware of this and working to fix it."

EARLIER: There is, of course, a perfectly rational explanation for why this oddity might be occurring. Like most voice-activated smart devices, Echoes have microphones that are always listening (unless you turn them off — there’s an on/off button on the top of all Echo devices for this purpose). When a device hears its “wake word,” it springs into action; after it’s been “woken,” it will listen for any commands you give it and perform them if it’s able to do so. But machines aren’t perfect, and sometimes these kinds of devices can misconstrue ambient noise as their wake words — which, in turn, can lead to some accidental interaction between them and their surroundings once they’ve been woken up. (Remember that Burger King commercial from 2017 that accidentally made any Google Home devices listening in begin to read off the Wikipedia entry for the Whopper?)

You can turn off the microphone on these kinds of devices; on the Echo, all you have to do is press the on/off button on the top. Additionally, after the Burger King debacle, Google said that they’re working on a way to stop Google Home devices from responding to ads, according to The Verge. In the meantime, though — and particularly if you regularly keep the microphones on your devices on — well, you can see how these devices might occasionally go awry.

BuzzFeed identified the initial trend, but if you dig deeper, there’s plenty more to find. Twitter, for example, is full of these kinds of stories:

For what it’s worth, when my Echo Dot laughs, it literally says the words “tee hee.” I’ve never heard it actually laugh — but that doesn’t mean that Echoes are incapable of laughing. If you have a Skill like Laugh Box enabled, your device has a whole wealth of laughs available at Alexa’s virtual fingertips which might be accidentally triggered by ambient noise; what’s more, if you have the Drop In feature of Alexa Calling and Messaging enabled, people you’ve given Drop In permission to might actually be able to talk to you — or laugh at you — through your Echo. (CNET has a thorough run-down on how Drop In works, so I’ll send you over there for details — basically, though, the feature allows households with multiple Echoes to use the devices as a home intercom system, and can also be used to have conversations with people on your Contacts list to whom you’ve given Drop In permission.)

As well as this one:

Largely because both videos feature the exact same laugh — which also isn’t Alexa’s standard “tee hee.” The sound clip had to have come from somewhere, and I don't think "somewhere" in this case is "evil demon possessing the device"

It’s possible that something like that might also be going on in experiences like these ones, all of which came from threads on the r/AmazonEcho subreddit:

These, too, seem to feature “evil” or “creepy” laughs that apparently sound different from Alexa’s usual “tee hee.” I do have to wonder whether there might be a little embellishment by the storytellers going on here — a situation in which smart devices randomly begin to laugh or speak in voices that aren’t their own makes for a great digital-era urban legend — but, y’know, do with that what you will.

For what it’s worth, it’s not just laughing, either; some people are reporting their devices making other noises or speaking full sentences unprompted. Indeed, that’s actually been my own experience — periodically, my Dot will randomly say, “I’m sorry — I didn’t catch that” when I haven’t actually said anything to it, let alone woken it deliberately with the wake word. These instances I think are pretty clearly results of the device misidentifying the wake word… but again, that doesn’t stop them from being super creepy when you’re experiencing them in the moment:

But then… there’s this:

What if Dear David has escaped into the internet?

I mean… he probably hasn’t. He’s fictional, after all. But...

BRB, performing an exorcism on every electronic device in my apartment.