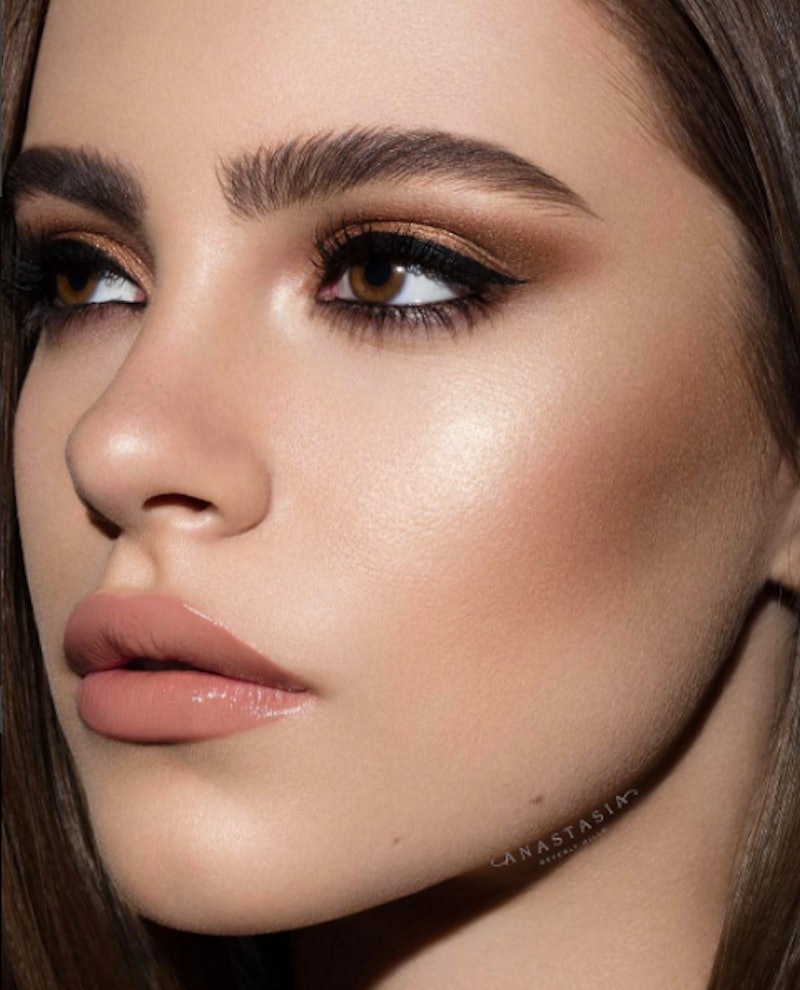 @anastasiabeverlyhills
By Jessica Thomas
May 16, 2017

Considering how insanely popular Anastasia Beverly Hills is, it's no surprise fans freak about new product announcements. And the first Anastasia Beverly Hills Liquid Glow highlighter is definitely big news for the brand. ABH is pretty much synonymous with the mega highlighter trends that are huge in the beauty world right now. From its Ultimate Glow Kit to the lunar-inspired Aurora Glow Kit, the brand pretty much has a lock on elaborate highlighter palettes right now.

One thing the brand hasn't done? A liquid highlighter. But according to Instagram, Twitter and Snapchat posts from ABH founder Claudia Soare, that's all going to change this summer. Over the weekend, Soare was Snapchatting behind-the-scenes snaps from a photo shoot, and it was pretty clear the models were being painted with a liquid highlighter. Although it definitely looks pretty dramatic in the pics of the highlighter, the end result was subtle and glowy — definitely not too over-the-top.

After the Snapchats, fans understandably got super excited about this new release for the brand. Was a liquid highlighter really coming? Soare ended up confirming the news herself on Twitter, saying: "Our shoot was LYFE today! @ABHCosmetics Liquid Glow coming this summer."

See what I mean about the results being pretty subtle? The highlighter is definitely glowy, but it's not too much.

Here's another Tweet from Soare, which shows the liquid glow in action. Plus, that pool is the perfect setting to showcase a summer launch.

It doesn't get more official than that. Despite the lack of close-up photos of the product, fans got super excited about the news.

Can you blame them?

Fans couldn't be more ready for this new launch, and it looks like it'll be here soon — stay tuned for more details about exactly what's coming.

More like this
10 Talc-Free Makeup Brands For Safer Eyeshadows, Powders, & More
By Audrey Noble
M.A.C.'s Colorful Gel Pencil Eyeliners Are So 'Euphoria'-Chic
By Audrey Noble
An Honest Review Of Rare Beauty's Tinted Moisturizer
By Olivia Rose Ferreiro
8 Knockout Beauty Looks From The 2022 Billboard Music Awards
By Audrey Noble
Get Even More From Bustle — Sign Up For The Newsletter