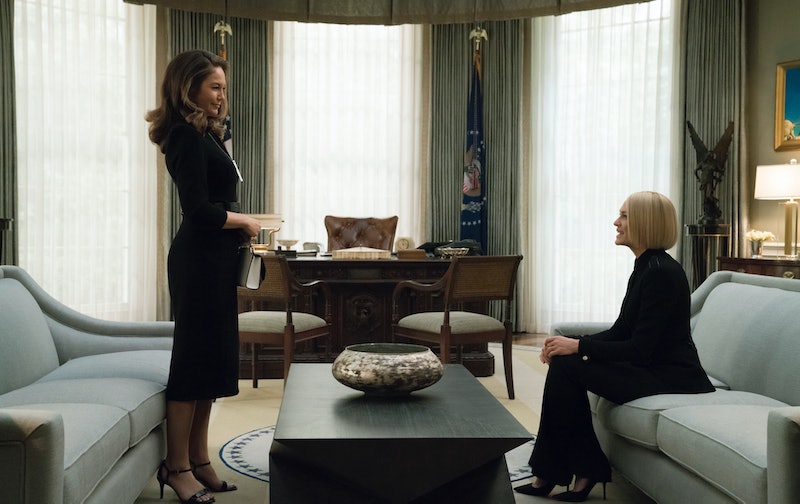 Amidst one notable absence from the House of Cards cast this season, there are a few new additions to be excited about. Diane Lane’s character on House of Cards is kind of an enigma at first — it’s hard to decipher whether she’s friend or foe to President Claire Underwood. In fact, it's a little bit of both. The character, Annette Shepherd, is a former classmate of Claire’s, with whom the Commander-In-Chief shares a puzzling relationship. But is Annette Shepherd based on a real person?

Though the details of Annette’s personality may or may not have real-life influences, the overall roles she and her brother Bill (Greg Kinnear) play are certainly reminiscent of another set of famous siblings. As Variety points out, they could be seen as a mirror image of the Koch brothers, who are often thought to be pulling strings and influencing politics behind the scenes just as Bill and Annette do in Season 6.

Bill and Annette run “Shepherd Unlimited,” a family business that through lobbying, monetary contributions and backroom negotiations, appears to have a heavy hand in how American politics play out within the show. Yeah, we’ve definitely seen that kind of thing in real life before.

In an interview with Vanity Fair, writer Joy Press suggested to Lane that she “basically played a Koch sister.” “I can nod,” Lane replied, and the author noted that she seemed to “indicate silence is required” so as not to give away too much of the influence that went behind her character. In the same interview, Lane also notes that there’s definitely a covert and often complex way that these characters interact with one another — it’s something that could make it hard to read exactly what everyone’s intentions are.

“There’s a doublespeak… [Characters make] suggestions that are encased in the packaging of a caution: ‘Gee, it would be terrible if such-and-such were to happen to her, wouldn’t it?’’ She said. “It is quite a task to walk that tightrope of this show, and it’s what makes it special.”

Kinnear has also made it clear that the siblings aren’t to be messed with. “They sort of pull the levers from behind the scenes and basically, at the end of the day, we want Claire to get the hell out of the White House,” Kinnear said on Live with Kelly and Ryan. “So that’s kind of the setup of it, and how we go about doing that is…There’s secrets. There’s always secrets.”

Bill and Annette are toeing a line that isn’t uncommon in the political world, both fictional and otherwise. While they might seem chummy with Claire, they’re certainly not opposed to making vague yet serious threats, and hitting back at her when they don’t get what they want. It seems that while Claire’s husband, Frank, was President, he made promises that Claire is unwilling to keep, and that doesn’t sit well with the siblings.

But there’s a new sheriff in town, and the Shepherds will have to get used to it, just like everyone else. Claire may be the former First Lady, but she’s just as much President as anyone who came before her, and she’s not about to let anyone ruin it for her.