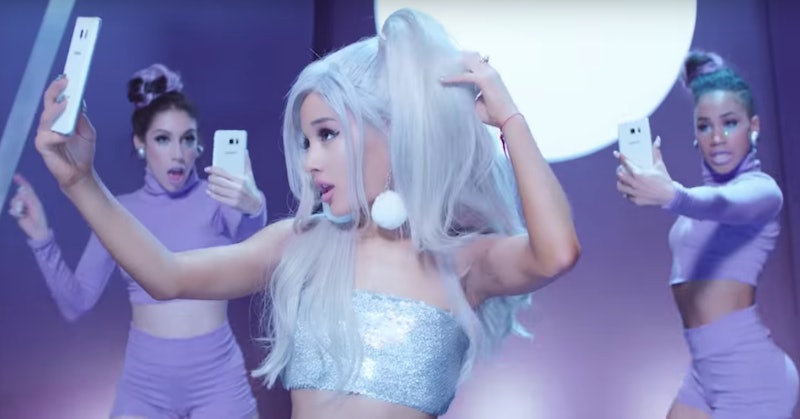 Only the brave of heart believe that dyeing your hair is no big deal. When you mucked up the courage to frost those ends somewhere in your dorm bathroom, it became routinely NBD. Ariana Grande's debut of platinum blonde locks, however, is quite the big deal. It's like, super blonde at that, and you're not even ready for the new look.

Although the "Breathin" singer had said she'd be laying low on social media to give herself some more "Ari time," she crept back onto Instagram to debut some new hair goals, and a teensy bit of music. What a little tease.

While taking a joyride under the sun (that natural lighting, though), the Sweetener singer shot a selfie video, lip-singing to more of her new music. Just a reminder that her last album dropped only four months ago. It's safe to say she's is killing it.

In a whirlwind of a week, Grande's gotten everyone blasting her latest single "thank u, next", performed it on Ellen, displayed two new (cute) minimalist tats in her video for "Breathin," and now she's unveiling this new silvery blonde look. Living and loving life is the tune it seems this singer's crooning. Thank you for your glam, Ariana, so what's next?

It isn't clear whether or not the look she rocked on Thursday (Nov. 8) was a wig or full dye job, but the endless heart emojis were enough to indicate fans were diggin' it.

One fan commented under the post, bestowing her the "Mother of Dragons" title in reference to her Khaleesi-esque locks. For right now, it seems as though Grande is here for breathing out the anxiousness rather than fire. But if she could summon up three fully grown dragons, that'd be great, too.

From what mega fans remember, Grande sported a similar platinum blonde look when she released her funky dance tune "Focus." People were jarred by the drastic switch from chocolatey brown to a Malfoy relative. And this time is no exception. It's so blonde it's kind of mesmerizing, especially coupled with that killer cat-eye every beauty lover dreams of achieving.

Grande is no stranger to changing up her look. She sported the snow white hue back in June when Ariana sat for the cover of Vogue UK with straight hair. And minus the iconic updo.

Since her fame skyrocketed, the singer has experimented a lot with her hair. Starting with highlighting her ends back in 2016, she's grown to the shock-worthy low-pony for the cover of her Sweetener album, and even did double duty wearing two silvery grey pigtails in Reebock's #Bemorehuman campaign. Grande changes her hair and overall appearance so often, she'll soon be saying "New look, who dis?"

While most hair dye jobs aren't this much of a spectacle, Ariana's luscious hair has become just as much of something to admire as her singing. Shaking things up with her hair so often, one can't help but wonder if she'll ever decide on returning to the fiery red roots she sported as Cat Valentine. But only time will tell.