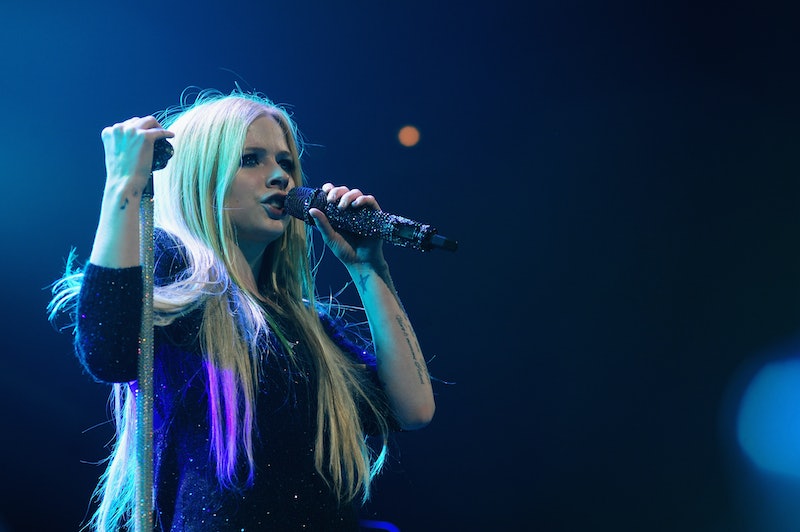 Oh, why do you have to go and make things so complicated? Just like many things on the internet, rumors of the death of pop star Avril Lavigne are greatly exaggerated. In fact for those wondering is Avril Lavigne dead, I have some good news for you: Lavigne is alive and well, and has not been replaced by a doppelgänger named Melissa Vandella as a internet conspiracy theory made viral through a recent Twitter thread suggests.

Conspiracy theories about Lavigne's demise have been circulating since 2013, and if you haven't heard them here is the quick and dirty: Tall tales of just how exactly the musician perished include everything from the standard to even a a tragic skiing accident (I'm pretty sure the description of this one is what happened to Sonny Bono).

A 2015 Buzzfeed story about the Lavigne hoax shows just how easy it is to get people to believe anything. Writer Ryan Broderick published photos from a blog called Avril Esté Morta that suggested the current Lavigne is an imposter. The photos compared little details like disappearing birthmarks and blemishes (because, you know, skin doesn't ever change over the years, to convince fans that the real Lavigne can not possibly be the real Lavigne.

Lavigne is not the first music icon to be accused of being replaced by a clone. A wild conspiracy theory dubbed "Paul Is Dead" that claims that former Beatle Paul McCartney died in 1967 and was replaced by a lookalike has been making the rounds since 1969. Obviously, McCartney is alive and well.

With the internet people can take their conspiracy theories viral pretty quickly, which could explain why people create "fake news" that they know isn't true.

"The creation of the Avril Lavigne death hoax is one of the best explanations for the larger celebrity death hoax phenomenon that has emerged in the last five years," an article on the Inquisitr stated. "While fake stories about celebrities dying have been around for decades, they have picked up considerably within the last few years thanks largely to the internet and proliferation of social media. What was once a rare occurrence has become very common, with some fake websites built entirely around creating these stories and making them go viral."

Perhaps people just want others to know their names, no matter what kind of kooky information is attached to it. Everyone is looking for their 15 minutes of fame.

I assure you that Lavigne is alive and well, as a recent tweet from the singer promoting a track suit proves.