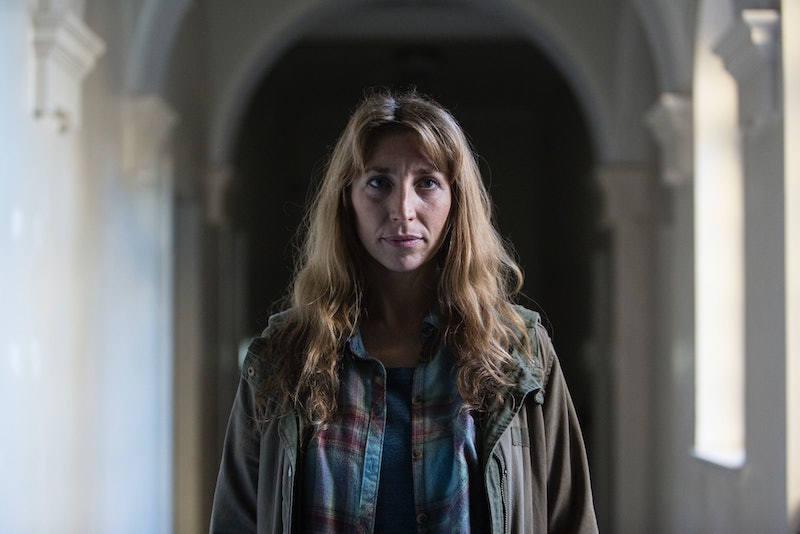 After being made available on BBC iPlayer last Monday (April 15), BBC's Back to Life will finally premiere on BBC1 tonight and this is one comedy you do not want to miss. Released from prison after spending 18 years behind bars, the show follows Miri Matteson as she adapts to life in the present day as opposed to the early '00s when she was first incarcerated. Written by and starring Daisy Haggard (Episodes, Uncle), the show promises some stellar comedy but is Back to Life based on a true story?

Update: A statement sent to Bustle from Multitude Media reveals that the series is entirely fictional, and that while Daisy Haggard came up with the idea while she was writing it, she did speak to recently released prisoners as part of her research.

Previously: Based on interviews with show creator and writer Daisy Haggard (who plays the lead character), it seems that the premise of Back to Life initially grew from a "fascination with how hard we are on a woman who's done a bad thing in comparison to how we treat men" as she recently told Radio Times. I've reached out to a representative for the show for further insight, but have yet to hear back. I'll let you know when I do.

Haggard explored this aspect of the show further in an interview with the BBC, where she highlighted that it seems people forgive men more easily than women.

"We put things that men do sometimes down to testosterone. We forgive them a little easier. I wanted to write a show about a woman who had done something in her past and what that would be like, to try and start your life again with that enormous dark secret baggage behind you."

While it seems that Miri Matteson isn't based on a particular person, Haggard did speak to former prisoners to hear about their experiences of returning back to normalcy so she could add a semblance of realism to Miri. "I thought it was so fascinating because in some situations, you know, you have to register at the GP, you haven't got a note to say where you live, you haven't been on a date, you don't know how to interact," she told BBC. "You've had this extraordinary, massive, enormous experience but you haven't actually had some quite fundamental, day-to-day life experiences and I thought that was just a really interesting story."

What's also interesting is how writing and portraying a character can lead to some overlaps between fiction and reality. Aspects of Haggard's personality are bound to be intertwined with the role of Miri, and Haggard is very aware of this. "In some ways, Miri would be how I would be in some situations," she explained to the BBC.

"She gets pushed to the floor and bounces back up again, she's an optimist and she's positive and essentially not what you would expect from her shocking past."

While Haggard has not committed any crimes herself, she does share Miri's "relentless optimism" which lends to the comedic aspect of the show. It's this connection that has led to the likes of Harper's Bazaar and Glamour UK comparing Back to Life to Fleabag, a show written by Pheobe Waller-Bridge who also plays the titular main character. Haggard is aware of this connection but has made it clear that the two shows have little in common other than Back to Life taking Fleabag's 10:35pm slot. "Our voices are so different I never wilfully felt I had to do anything to make it [Back to Life] feel different," she told BBC. "I think it's fantastic but also my voice is a different voice and so I didn't consciously do anything because it was just a very different story in my mind."

All episodes of Back to Life are currently available to watch on BBC iPlayer. The series premieres tonight on BBC1 and will continue weekly.