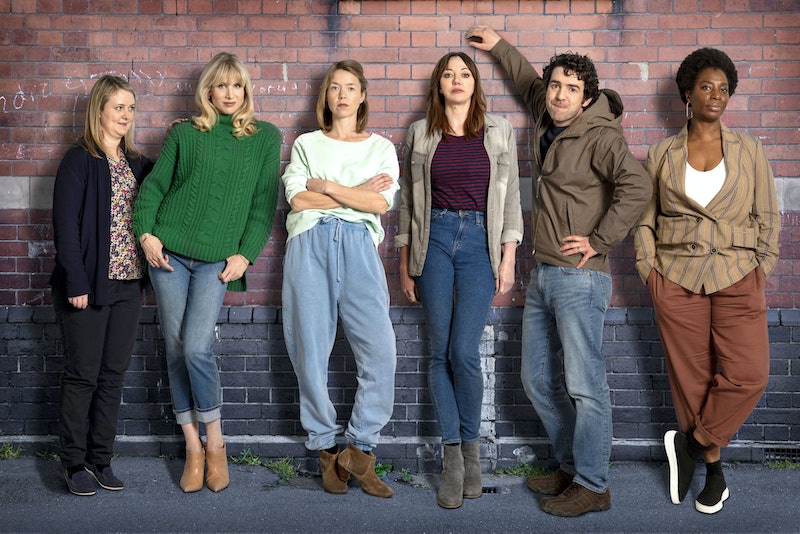 If you have children, younger siblings, nieces or nephews, or are around kids at all on a regular basis you know two things all too well — they’re cute but they’re so much work. While some TV shows, blogs, and Instagram pages can fall short in showing what having kids can really be like, the hilarious BBC Two sitcom that puts parenting out there, warts and all is returning for series two. But is Motherland based on a true story?

Some of the situations in Motherland season one are so close to the bone, it leaves you wondering whether it might be based on IRL experiences. I reached out to a representative of the BBC to find what the inspiration behind the show is. While they told me "I don’t think the series is based on a true story," both Horgan and Maxwell-Martin have spoken openly about how their real lives inform the storylines in Motherland.

There’s no escaping how observational the comedy is in Motherland. Both Maxwell-Martin and Horgan have children of their own and in an interview with Grazia, the former revealed that Julia’s gang of Liz (played by Diane Morgan), and Kevin (played by Paul Ready) may mirror reality a little more than you’d expect. Maxwell Martin said, "You do need your people, especially if you’re working. God, I sound like Julia taking advantage of all her friends, but you do need friends to pick up your kids!”

In Motherland, dramas at the school gate come thick and fast. When asked about picking her own daughters up in the Grazia interview Horgan said, “when it went out last time, I was really anxious and thought, “Oh god, they’re all gonna think I’m here to steal their souls and their stories.” I got a bit paranoid. But then I’m always paranoid in school.” She continued:

“I’ve actually just finished the whole drop-off and pick-up thing where you go in, head down, because you can’t see any of your crew. Or you spot them and hang around talking about the others... Both my kids are now in secondary school. It’s going to be interesting to see how we write the third series.”

It’s not hard to see why series one of the show took off so well. The sitcom has an all-star writers room made up of Sharon Horgan, Holly Walsh, Helen Lineham, and Barunka O’Shaughnessy. It may feel like all of the parenting dramas had been crossed off in series one of Motherland but by the looks of things the show's writers were just getting started. Series two opens with the gang finding a new mum friend at the gates. Between Julia attempting to maintain commitments to her friends that she can’t, working from home in the school holidays, and organising a trip to the countryside which is as entertaining as it sounds, there’s never a dull day in Motherland.

If you’ve missed the chaos and hilarity that is Motherland it returns Monday, Oct. 7 at 10 p.m. on BBC Two.