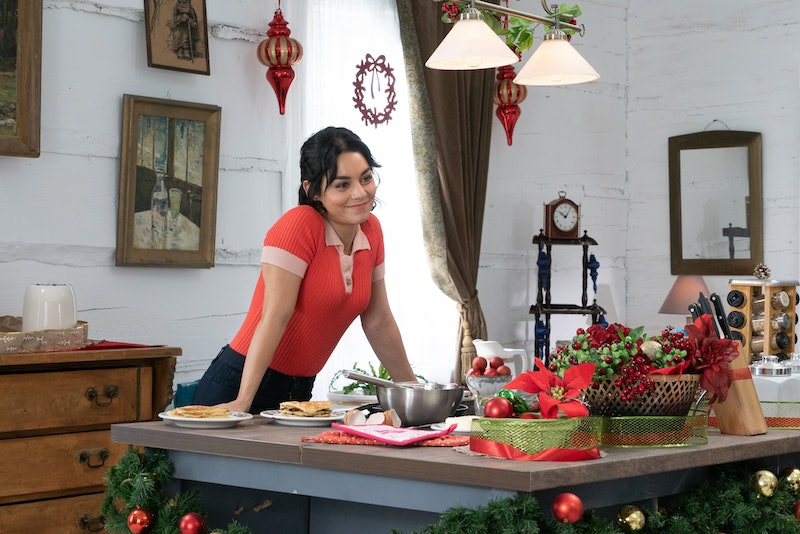 First came Genovia, then came Aldovia, and the newest edition to totally awe-worthy fictional royal locations is Belgravia, the country from Netflix's The Princess Switch. The former two locations are from The Princess Diaries and A Christmas Prince respectively. It seems that simply adding "via" to the end of a country name makes it instantly more luxurious and royal. As Entertainment Weekly jokingly noted, Netflix seems to just be moving through the alphabet of fictional countries. Expect to see Calovia or the like in a 2019 Christmas movie.

In The Princess Switch, Stacy (Vanessa Hudgens) travels to Belgravia for a baking competition where she runs into the Duchess of Montenaro (also Vanessa Hudgens) who looks. just. like. her. They do a Parent Trap switcheroo (but at Christmas time and not to reunite their parents) to see how the other half lives. But all the stars were living pretty well during filming, which took place on location in Romania, according the movie's end credits. According to the Washington Post, that's also where A Christmas Prince was filmed, at Peles Castle.

But though The Princess Switch returned production to Romania, it filmed at a different castle. Specifically, it used the Karolyi castle in Carei, Satu Mare County, according to the credits. The film had it all dressed up for Christmas with decorations and snow, but during warmer months it looks like this.

The castle was first built in 1482 by Károlyi Láncz László, according to Welcome to Romania. But it was given its final finishing touches in the late 1800s to make it look the way it does today, per UVisit Romania. It's now a tourist attraction, and sure to be even more so once The Princess Switch introduces a whole new audience to the winter wonderland on Nov. 16.

Here's what it looks like in its most festive state in the Netflix movie.

And though Belgravia as a country with a monarchy isn't real, there is a real Belgravia. It's a neighborhood of London, and it's fancy enough for any royal. Airbnb describes the location as "regal London dressed in its Sunday best." But the high-end neighborhood is also kind of a ghost town, according to the New York Times.

The outlet reported that Belgravia's expensive real estate can got for $7.5 to $70 million, and while there are people paying those prices — they're not staying in the homes year round. According to the NYT, most tenants are wealthy people from foreign countries like India, Russia, and Asia. They treat their Belgravian homes as hotels, staying a few times a year before jet-setting off to another one of their luxurious homes in another fancy city. But rest assured that the wealthy nature of the area waits for no man, and with local pet stores selling dog beds for $358 it will apparently always be an affluent part of town. Even if no one is living there.

The Princess Switch viewers will likely prefer Netflix's version of Belgravia, steeped in Christmas spirit with local winter markets, decorations on every corner, and cozy cottages decked out with Christmas trees in literally every room. It's a holiday fantasy come true — at least for the hour and a half that you're watching the film.