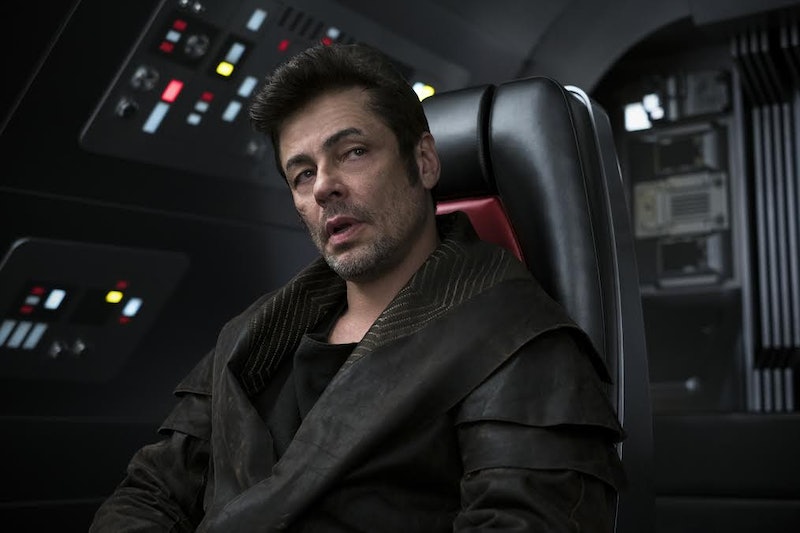 Spoilers ahead for Star Wars: The Last Jedi. The latest Lucasfilm adventure The Last Jedi introduces a number of new characters and creatures to the Star Wars universe. Most mysterious among them is DJ, played by Benicio Del Toro. Not even announced as part of the cast until a few days before filming started, Del Toro was also notably absent from the major Star Wars Celebration of April 2017. His character's name wasn't even revealed until May, and few other details have been unveiled. Pictures and toys of the character show a shabbily dressed, shifty-eyed guy with three-day stubble and a scowl to match, leaving fans wondering what his role might be. Would he help the Resistance, or is Benicio Del Toro playing a Dark Jedi, helping the New Order rise to power?

Now that The Last Jedi is out, fans will have all questions answered... even if the answers just leave them with more questions. DJ's official description, according to the Star Wars materials, is "an enigmatic figure whose tattered, threadbare clothes and lackadaisical attitude conceal a sharp mind and expert skills.” In an interview with Entertainment Weekly, Del Toro's co-star John Boyega revealed exactly what skills those were, saying, "We just need a codebreaker and [DJ]'s the best in the galaxy." It's no wonder DJ is cryptic - cryptography is literally a part of his character.

In The Last Jedi, Finn (played by Boyega) and Rose (played by Kelly Marie Tran) are on a mission to sabotage some First Order ships, and need a slasher (Star Wars speak for "hacker") to help them get inside. At first glance, DJ is not the slasher they are looking for. Drunk, sarcastic, and scuzzy, he seems barely coherent, forget the ace tech expert they need. But DJ's foolish front is just another part of his enigma, hiding one of the best minds in the galaxy. This sort of subterfuge is exactly the reason fans going into the movie weren't sure where DJ sits politically or emotionally. Good guy? Bad guy? A man out for himself?

Well, most of them figured he was pretty bad. An early interview with Entertainment Tonight said that Del Toro would play the role of "lead villain" in The Last Jedi, and the actor all but confirmed he was in for the part. Soon after, though. Del Toro quickly walked back the title in a second Entertainment Tonight interview, claiming that when it came to being the bad guy, "People are saying that, but it’s like they read a different script than I read." So... not a villain then?

The truth is complicated. In the movie, DJ is helping out Finn and Rose, heading with them to planet Cantonica's luxury resort mega-casino Canto Bight to fight the First Order. And for a while, fan theory had him pegged as the movie incarnation of padawan and rebel fighter Ezra Bridger from the animated TV series Star Wars Rebels. That was crushed when director Rian Johnson specifically said he wasn't, telling fans on Twitter that "D.J." stood for something important and specific to the film.

Could those initials stand for Dark Jedi? A lot of people thought so, especially after Del Toro's earlier slip up, but that would be too obvious — even for a world that had a guy named Elan Sleazebaggano selling Death Sticks. The popular theory on Digital Spy was that the D stood for Darth, but DJ seems firmly ambivalent, not straight-up Dark Side.

The big breakthrough came in early September, when collectible toy company Funko POP! released a DJ figure that had his full film outfit. That included a large metal hat tag with glyphs in Aurebash, one of the most-used languages in the Star Wars universe. A fan at MakingStarWars.net translated it to... wait for it... Don't Join. That's right, the character's hat boldly states he's not going to take sides in the battle between Rebels and the First Order.

Instead, DJ is a man out only for himself. In a direct echo of Lando Calrissian's betrayal in Cloud City, The Last Jedi sees DJ offers to help the Rebellion only to ultimately double-cross them in a deal for his own freedom with the First Order. Whether, like a certain blue-caped charmer, DJ will redeem himself by helping the Rebellion is yet to be seen. The character's mystery has only begun to be unravelled.