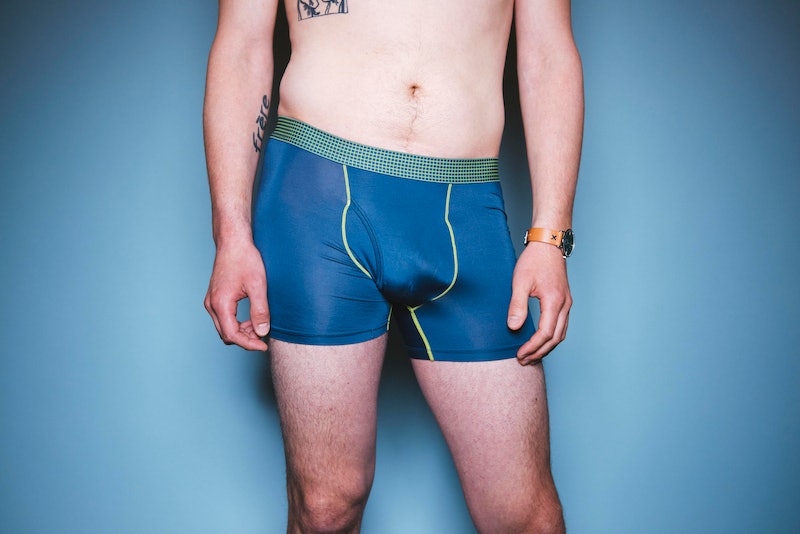 Recently, hearts the internet over shattered at the news that a scientific study of dick pics would be called off. The reported reason for the study's cancellation: That overzealous penis-havers had avalanched author Alicia Walker with nudes, obligating herself to halt the project as she dug herself out. What actually happened: Flawed coverage seeded chaos into a research effort architected over the course of six years, making it impossible to complete as planned.

The same week Walker, an assistant professor of sociology and anthropology at Missouri State University, announced that she was shutting down the study, the term "Big Dick Energy" — BDE — enjoyed a viral moment. Ironic timing, really: While Walker's study was widely billed as an open call for dick pics, a lens through which to probe the link between penis size and self-esteem, she actually set out to explore whether or not well-endowed men derive confidence from the size of their packages. Walker was testing for BDE, but tangled up in the idea of sending nudes for science, we all tanked the whole thing.

For those who somehow missed it, BDE grabbed the internet's attention for whole days after singer Ariana Grande tweeted — and then deleted — the intriguing disclosure that her the new fiancé, Saturday Night Live's Pete Davidson, possesses a 10-inch penis. This very personal trivia point failed to surprise many observers who, having clocked Davidson's unflaggingly self-assured vibe, assumed the obvious explanation: BDE, or, the "quiet confidence and ease with oneself that comes from knowing you have an enormous penis and you know what to do with it," per the Cut.

Walker's idea crystalized over the course of years, as she pinpointed a pattern in the straight, cisgender women she knew: A lot of them had partners with big penises, which — statistically speaking — comes as some surprise.

"When you think about the way the bell curve works, that doesn’t seem random," she tells Bustle. "I know that these women aren’t vetting for size, so what are they vetting for that's yielding [this] sample?"

Most people don't approach dating the dating pool as a sea of dicks to be sifted through until they find their perfect size match, after all. Many people are after compatibility, and indeed, personality often emerged as a second unifying theme in Walker's casual conversations. Speaking to these women, she noticed that "the only thing they [had] in common was that they like someone who is confident, not arrogant. So when I heard this term Big Dick Energy, I said, 'That’s exactly what these women were talking about!'"

There already exists evidence to suggest that men who perceive themselves to have small packages — even if they exceed the average erection size, roughly five inches long and five inches around — tend to have related self-esteem issues. Walker wanted to know: "Does that relationship run the opposite direction? If I’m small, that could affect my self-esteem; if I think I’m large, could that impact my self-esteem in the other direction? Or maybe I have self-esteem issues around thinking that I’m large — does that relationship run any direction other than what we already know?" And relatedly, does that self-esteem affect condom use; willingness to engage in relationships; sexual confidence; how attractive the penis-having parties presumed themselves to be?

In short, does having an enormous penis explain that aura of comfortable self-possession glowing around the Pete Davidsons of the world?

On June 28, Walker issued a press release announcing that she would not move forward with the study. "I made this decision voluntarily," she says. "I continue to believe the relationship between penis size and self-esteem is an important site of scientific inquiry, but the public reaction to the project threatens the reliability of the survey responses."

About a week into the study, an outlet aimed at college students reported that Walker was "asking men across America to send her pictures of their genitalia." Other outlets reported that Walker sought a minimum of 3,600 dick pics, and that she specifically solicited them from her own students, along with "detailed descriptions of their dicks." None of that is correct, Walker says.

To execute the study, Walker's research team posted on Reddit and on men's health forums. They put out the call on social media. They had plans to advertise with flyers in amenable hospitals and night clubs. But Walker wasn't out there, walking up to men and asking for pictures of their penises. Like any trained researcher would, she had a system.

Walker set the minimum age for participation at 22, automatically weeding out most college students. Interested parties agreed to an interview and/or a survey, the latter completed through an online portal that verified their age. The interview portion did not require subjects to submit photos — these men just talked to Walker about their size and their self-image. Those who chose to complete the survey sent images through the same portal, but, Walker cautions, "These were very clinical pictures: Imagine something in a medical textbook, not something you would see in Playgirl."

Originally, she hoped to gather the largest and most representative sample possible — but thanks to misrepresentation, she ended up overwhelmed with off-base responses. She had hundreds of interview requests to sift through each day, an inbox filling up with dick pics she did not — contrary to multiple reports — ask for, and people emailing her to say they'd deliberately contributed false information to her survey. The ultimate decision to shut it down was depressing, she says, because she "spent six years planning the study, and I had to close it down prematurely."

Still, A Few Trends Jumped Out

Even if a widespread lack of maturity forced her study off the rails, it would make sense that so much response would yield a few notable patterns. And indeed, Walker said she did notice a few trends — trends that seem to support the existence of BDE. In the beginning, Walker says, her team advertised on forums catering to well-endowed dudes, and started off with a more varied sample. But as news spread that this woman wanted men to send her dick pics, the participant pool grew more homogenous.

Some studies suggest that insecure dudes have a greater propensity for sending nudes, so it may not surprise anyone to learn that the majority of people who participated in Walker's research did not exactly ooze confidence.

"Interviews fell into two camps: Men well below average, and men above average," she says. "[The latter would] fall into large, but they don’t see themselves that way."

The men who perceived themselves as lesser-than frequently reported having no one to confide in: They did not feel they could talk to their friends about their genital situation, and the internal angst translated to real health implications. "A few told me that they’ve attempted suicide because of how they perceive their size," Walker notes. "They haven’t even approached a woman in a decade, or are never going to approach a woman. They’re convinced no one will ever love them."

Alongside this group, Walker heard from a lot of men who chastised her for asking questions in the first place, either because size doesn't matter or because they assumed she would hear only from men with meaty packages. But BDE does not seek external validation. If you've got that BDE, you probably don't need to have a scientist confirm that yes, your member and your self-confidence are proportionately impressive. You probably won't take much notice of headlines that draw a correlation between dick pics and self-esteem, because measuring up has never provoked concern for you. In short, you may have BDE blinders on that cause you to overlook or minimize what constitutes, for many others, a real source of anxiety. Or simply to overlook a survey that would benefit from your input.

Will Walker attempt to redo her study at some point in the future, after everyone has calmed down about the nudes? Probably, she says, after the fuss dissipates, she'll try again with a less public recruitment strategy. "Because the world wants to know," she says, "we will have answers: is BDE a thing?"

More like this
The 19 Best Tweets & Memes About Bisexual Awareness Week
By Lexi Inks
Why A Libra & Libra Couple Might Become Codependent
By Kristine Fellizar
These 4 Signs Are The Seductive Sirens Of The Zodiac
By Brittany Beringer
Breeding Kinks Have Been On The Rise Since Roe V. Wade Got Overturned
By Lexi Inks
Get Even More From Bustle — Sign Up For The Newsletter