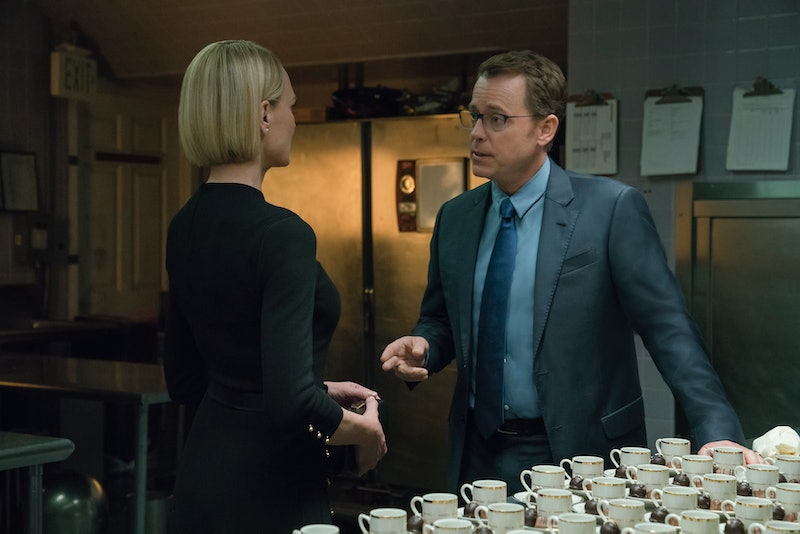 When you've got an actor as likable as Greg Kinnear, it can be hard to see him as a bad guy. But his character is not hiding his ruthless nature on House Of Cards Season 6. Spoilers for Episodes 1 through 3 follow. Bill Shepherd on House Of Cards runs Shepherd Unlimited —a conglomerate that wields a tremendous amount of influence over the government — along with his sister Annette (Diane Lane) and her son Duncan (Cory Fern). Although he isn't elected into office, Kinnear's character has political power through his business dealings and Bill Shepherd is unsettlingly based on some very real people.

In the House Of Cards Season 6 trailer, Robin Wright's President Claire Underwood talks about the "American oligarchs," who are "trying to strip me of my constitutional power as your commander in chief." While Claire herself had a controversial rise to power, the first three episodes of the final season have her battling with the Shepherds. Bill and Annette are private citizens who use their businesses to manipulate politics in a way that will benefit them — whether that be through creating legislation or putting people in power. If this sounds a bit too familiar, Variety reported that Bill and Annette Shepherd are based on the infamous Koch brothers. And in an interview with Vanity Fair, Lane vaguely confirmed this Koch connection.

Bill makes no bones about his intentions to bully Claire into doing what he wants. In the first episode, he critiques her Fourth of July speech, tells her to stop backing a candidate he disapproves of, and — as viewers confirm later — threatens her life with a staged assassination attempt. Not to mention, he is controlling Vice President Mark Usher and was responsible for planting Frank's ring in the White House to send a message to Claire. While the Koch brothers are incredibly influential in U.S. politics, they aren't that blatantly (or criminally) involved in the goings on of the White House, but there are plenty of other ways Bill Shepherd can be compared to them.

The Koch brothers got their money from their father's oil refinery business and turned it into Koch Industries, BBC reported. Their empire is involved in industries like energy, agriculture, and electronics, but Charles and David Koch haven't stopped there. They also use their money to fund politicians and organizations that promote their conservative and libertarian agendas. As NPR noted, they spent millions of dollars to bolster the Tea Party, the fiscally conservative political movement that began after President Barack Obama entered office.

Bill isn't behind creating a political party, but he does try to control the government in the shadows. And additional parts of Bill's story parallel the Koches. Bill tells Mark in Episode 3 how his brother George sued Shepherd Unlimited for the company's criminal dealings with an oil refinery operation they had acquired. As a result, their father cut George out of the will. While David and Charles are the people behind the "Koch brothers" handle, there are two other brothers in the family — Bill and Frederick. As Forbes reported, Bill and Frederick sold their shares of the family business to Charles and David (who is Bill's twin) in 1983. But the lesser-known Koch brothers spent nearly the next two decades suing for more money.

Another element in Episode 3 is how Duncan's part of the company has bought the paper Tom Hammerschmidt works for, The Washington Herald. If that seems farfetched for real life, you only have to look as far back as November 2017 to when Time Inc. sold to Meredith. As NPR reported, the Koch brothers provided $650 million to this deal. Meredith announced that the Koches would be silent partners, but there was speculation that their conservative agenda could have an influence on Time Inc. publications like TIME, PEOPLE, and Sports Illustrated.

Despite the Koch brothers usually backing Republicans, they have notably been at odds with the current president. As CNBC outlined, Charles and Donald Trump's relationship isn't good even though they agree on things like tax cuts, deregulation, and the appointment of conservative judges. One of the major issues they disagree on is trade and Trump even tweeted that the Koch brothers were "a total joke in real Republican circles" in July.

The political disagreements between President Claire Underwood and Bill Shepherd aren't exactly the same as those between President Trump and Charles Koch. Yet, a similar antagonistic relationship between these power players is playing out on House Of Cards Season 6. Particularly when Bill uses the president to push his agenda with the FUTURE Act and condescendingly (or, emasculatingly, as Claire says) puts his hand over hers to force her to sign the act at the end of Episode 2.

Another way that Bill is linked to the Koches is his health. In Episode 3, it's revealed that Bill is sick. In June, the 78-year-old David stepped down from his role in Koch Industries due to his declining health. USA Today noted he is a prostate cancer survivor.

The Koches are not the only powerful family in politics. Instead of the Koch brothers, Slash Film compared the Shepherds to the Mercer family, who are a father-daughter team that financially supported Trump's presidential campaign. But no matter which family Kinnear's Bill Shepherd represents, House Of Cards is making a major statement about the deadly consequences that can come from private citizens using their billions to control the actions of the government.