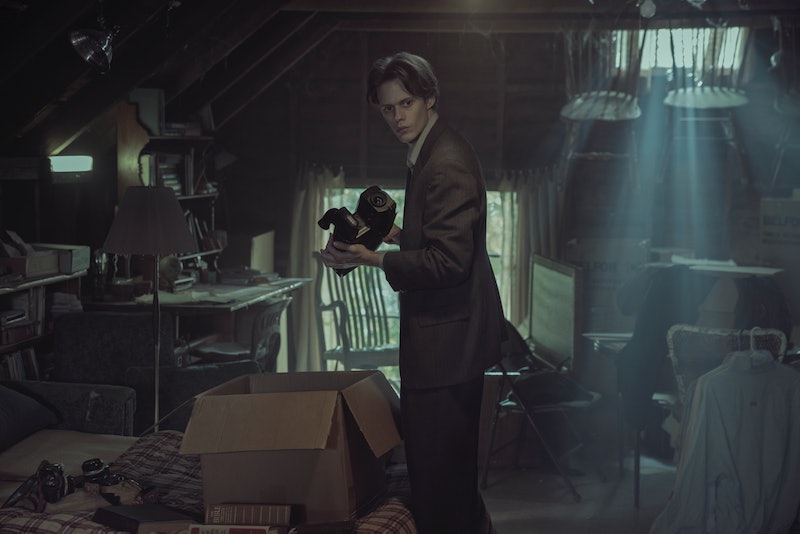 Though Castle Rock will still be set in its titular town, the mysterious "kid" — and by extension, star Bill Skarsgård — won't be in Season 2. His character's storyline has been resolved, and the actor isn't credited for Castle Rock Season 2 on IMDb. However, it's not outside of the realm of possibility that he'll appear in the show again at some point down the line; after all, the Kid ended Season 1 still locked in Shawshank, which happens to be the setting of a famous jailbreak. And though the show is technically an anthology, revisiting old characters is something Dustin Thomason, one of the showrunners, has hinted at.

"I think part of [why we were excited about Castle Rock is] ... that there would be interconnectivity and that we would be able to circle back to characters in the same way that [Stephen King] sometimes does in the novels, but that we would have the chance over multiple seasons to actually tell new stories and to be able to touch on characters and locations in that way," he told The Hollywood Reporter in July 2018.

If and until Skarsgård pops up again, though, fans of other Stephen King adaptations still have some familiar faces to look forward to. Castle Rock Season 1 was an homage to a number of the author's works, and featured several actors who'd previously appeared in movies based on his books. For example, Skarsgård played the unhinged Pennywise in It (and now It Chapter Two) based on King's 1986 novel of the same name, while his co-star Sissy Spacek starred in the 1976 film Carrie, which was based on King's first novel.

Castle Rock's second season primarily follows Lizzie Caplan as a younger version of Annie Wilkes, the infamous killer from Stephen King's 1987 book Misery. But it will also feature Tim Robbins, who starred in Shawshank Redemption, the 1994 film based on King's novella Rita Hayworth and Shawshank Redemption. According to the Washington Post, he plays a character named Reginald 'Pop' Merrill, who appeared in the King novella Sun Dog. "Pop seems just a crusty blend of 'crackerbarrel philosopher and hometown Mr. Fixit,'" Michael A. Morrison wrote in the Post back in 1990. "But behind this facade is a mean-spirited, duplicitous soul whose allegiance to the technological debris that fills his junk store is far stronger than to the Maine community where he lives. Pop represents the sick undersoul of Castle Rock and a thousand like towns."

Alongside Pop, Season 2 will feature Paul Sparks as Pop's nephew, John "Ace" Merrill, a character who appeared in both Needful Things and Stand By Me, as well as Captain Phillips star Barkhad Abdi as Abdi Howlwadaag, who is shown feuding with Pop in the trailer. Perhaps most significantly, Eighth Grade breakout Elsie Fisher will appear as Annie's daughter Joy, a character unique to the show.

So yes, Skarsgård and the Kid will certainly be missed, but there are plenty of new characters to delve into.