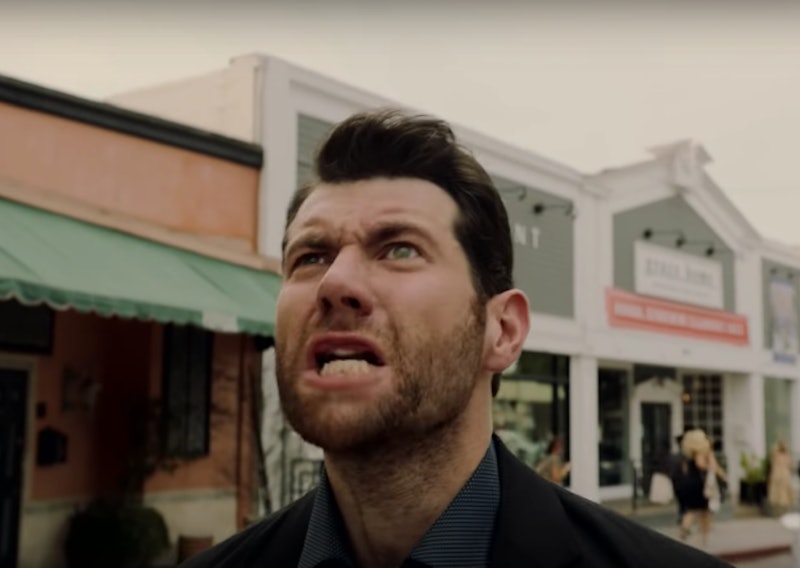 Listen: when World War III does break out, we're not all going to make it out alive. I'm just being honest. Sadly, Billy Eichner's Brock Vanderbilt seemed to be one of the casualties of the nuclear war that kicked off Season 8 of Ryan Murphy's anthology series. But is Billy Eichner's Brock really dead on AHS: Apocalypse? Or can Billy On The Street fans hope for a surprise return at some point in the season?

Of course, death has never really been a permanent state of affairs on American Horror Story, with practically every season featuring ghosts or zombies or resurrections galore. Characters have bounced back from stabbings, stranglings, burnings, dismemberments, decapitations, and more. But if there's one fairly foolproof way to kill someone, it's probably vaporizing them with a megaton nuclear warhead.

Indeed, on the show's official website, Eichner is not listed as one of the main characters of Season 8, unlike his onscreen wife, Cult co-star Leslie Grossman as Coco St. Pierre Vanderbilt. Brock's demise was already teased in the trailers for Apocalypse, with him screaming "Don't leave me in Santa Monica!" while Coco's plane whizzed by overhead. But it still feels surprising that the famous actor — who had a pretty sizable role in Cult — would be offed so early in the season.

So could Brock have survived that atomic blast? Given that Santa Monica lies about 15 miles outside of Los Angeles proper, it's conceivable that he could have survived the initial explosion if the bomb had been dropped on downtown L.A. rather than directly on the beachside neighborhood. Still, there likely weren't many survivors in the area for long, thanks to radiation and starvation and general post-apocalyptic violence.

That being said, there is reason for fans to be optimistic that Eichner will be seen again before the Apocalypse is over. In early August, the Difficult People actor posted a photo on his Instagram of himself getting a mold taken of his face, accompanied by the hashtag "AHS8." Either some strange scene featuring a model of Brock's head was cut from the premiere… or Eichner still has more to do in Season 8.

But what will he be doing, how did he survive — and why did they need a mold of his face?? If Brock was very enough away to not be vaporized by the blast, it's very likely that he was exposed to enough radiation to turn him into one of those hungry, flesh-eating monsters lurking in the woods outside Outpost 3. Bringing Asylum's cannibalistic "Raspers" to mind, so far the creatures are a faceless horde seen only from afar. But it's conceivable that one of them will be a character we know when finally seen up close.

Will Coco try to escape Outpost 3, only to meet her end at the hands of the mutated husband she left behind to die in "f*cking Santa Monica"? It would be an ironic but fitting end for the couple. Between Cult and Apocalypse, Eichner's and Grossman's characters just can't catch a break, can they?