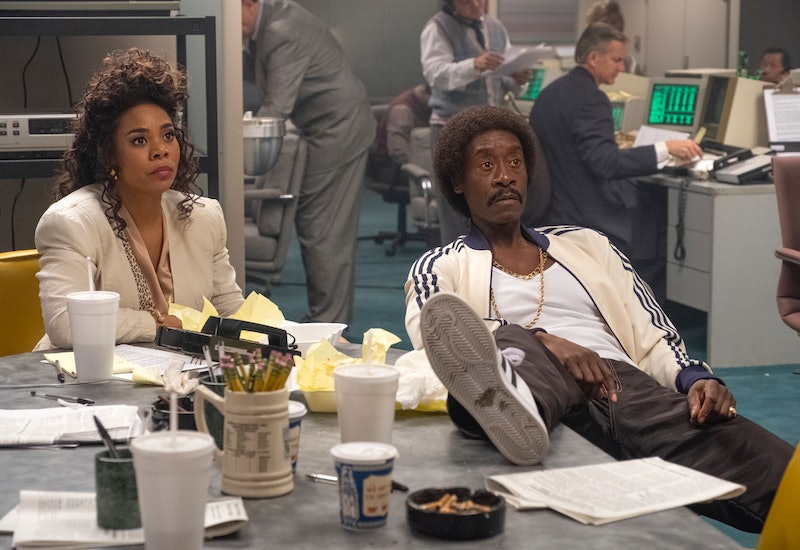 While Showtime's new comedy series, Black Monday, isn't based on a true story, it is grounded in some very real history. As you may have guessed from the title, its set amid the devastating 1987 stock market crash of the same name. As reported by Bloomberg Markets, it was the biggest single-day stock market collapse in the history of Wall Street, and still holds that title more than 30 years later. But as far as the show goes, that's about as much historical accuracy as you can expect.

Black Monday was created by Jordan Cahan and David Caspe. Cahan wrote My Best Friend's Girl, the 2008 film starring Dane Cook and Kate Hudson, while Caspe created the beloved sitcom Happy Endings and wrote the Adam Sandler movie That's My Boy. Friends and frequent collaborators Evan Goldberg and Seth Rogen also serve as executive producers, and together, they directed the first episode of the series. With this crew behind-the-scenes, you don't really have to be a financial whiz to figure out that Black Monday is going to be taking a lot of creative liberties for laughs.

What is true is that on Oct. 19, 1987, the stock market crashed, and that the Gordon Gecko "greed is good" mentality — a reflection of the excess that has in many ways come to define the 1980s — was indeed a very present part of Wall Street at the time. But from there, Black Monday doesn't really worry about the facts. For instance, the Lehman Brothers' "too big to fail" company did exist for more than 150 years until it went bankrupt in 2008, but it wasn't run by a pair of dastardly twins in the '80s (hey there, Ken Marino) like Black Monday would have you think.

"The show is, I would say, at least a foot off the ground, and very much a satire," creator Cahan told The Hollywood Reporter. "None of the characters are based on anyone real, in terms of specific traders, but we had heard a lot of stories about Wall Street at the time, and read a lot, and mixed it all together into our own characters and voices."

So besides Larry and Lenny Lehman, Maurice "Mo" Monroe (Don Cheadle), Blair Pfaff (Andrew Rannells), and Dawn Darcy (Regina Hall) never existed. Cheadle told THR that the mix of fact and fiction was "a lot of the fun of" making Black Monday — especially since he said these characters "wouldn't have existed in the way that they exist in this show, all together, under one roof, in a trading house on Wall Street." And, if you watched the pilot episode (which was posted on YouTube ahead of the broadcast premiere) and had your eye on some sweet '80s denim, you may be disappointed to know that the company that Mo is after — Georgina Jeans — is also not real.

What this all means is that you should turn to Black Monday for outrageousness, but not for a history lesson. And if you don't really understand stock market trading anyway, you may be just fine with that.

More like this
This 'White Lotus' Symbol Could Hint At A Major Character's Death
By Grace Wehniainen
The Kenan & Kel Reunion On SNL Took A Dramatic Turn, Thanks To Keke Palmer
By Brad Witter
Keke Palmer Just Announced She's “Going To Be A Mom” On SNL
By Brad Witter
The 'Firefly Lane' Book Ending Teases Way More Tears To Come In 2023
By K.W. Colyard
Get Even More From Bustle — Sign Up For The Newsletter