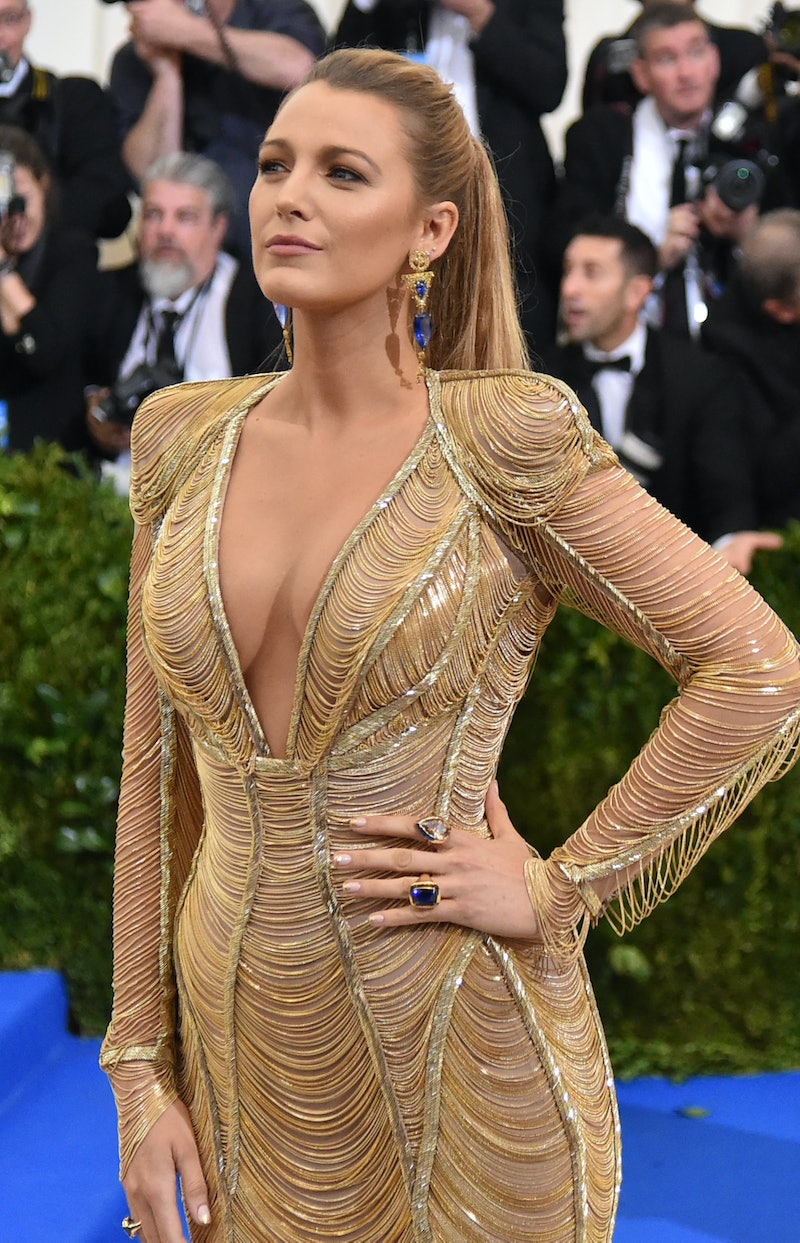 On Monday, Dec. 4, The Hollywood Reporter reported that Blake Lively injured her hand on the set of The Rhythm Section, an upcoming film, and production has been temporarily halted in Dublin, Ireland. If you're wondering if Blake Lively is OK, a spokesperson for the production issued the following statement to THR:

"Paramount, Global Road (formerly known as IM Global) and producers Michael G. Wilson and Barbara Broccoli today confirmed that filming has been temporarily suspended on The Rhythm Section as Blake Lively sustained an injury to her hand while filming an action sequence. Production will resume as soon as possible."

Lively hasn't publicly said anything to the press or on social media regarding the injury yet. Bustle reached out for comment to a rep for Lively, but did not receive a response at the time of publication. It is also unknown what the action sequence involved or how exactly Lively injured her hand. The film is scheduled to be released on Feb. 19, 2019 and it is currently unclear if the injury or the production suspension will affect the release date in any way.

According to THR, The Rhythm Section is a spy thriller that is based on the the novel of the same name, which is the first in a series of Mark Burnell’s Stephanie Patrick books. The movie will follow Lively as Stephanie Patrick, who loses her family in a plane crash that she was meant to be on — and she sets out to investigate the cause while adopting the identity of an assassin. The movie sounds like a super intense thriller — and like it could possibly be the start of a Bourne Identity-like franchise for Lively. I mean, you never know. The film also stars Jude Law and is being helmed by The Handmaid's Tale director Reed Morano.

Recently, Lively was spotted donning a short, blake hair style for the role, which made headlines earlier this week. On Dec. 2, she posted a still from The Rhythm Section in which she sports the hair style on Twitter. "[Dark hair emoji] is my spirit animal," Lively wrote in the tweet, accompanied by the hashtag for the film. It's a big change from the actor's usual flowing blonde locks, but fans were super supportive of the change on social media.

Lively announced her involvement in the film in July with an enthusiastic post on Instagram of the novel's book cover. "Yes. Yes. Yes!!!" she wrote in the caption. "I couldn't be more excited to be bringing this incredible and complex [woman emoji] hero to life. [movie camera emoji] @reedmorano Let's go!"

On the big screen, Lively is no stranger to taking on daring and action-packed roles. In 2016, she played a surfer who is attacked by a shark in The Shallows, and a blind woman who regains her sight in All I See Is You. In 2012, she played a woman who is kidnapped by a drug cartel in the Oliver Stone-directed movie Savages. In 2011, she starred as Carol Ferris opposite her husband Ryan Reynolds in the superhero action movie Green Lantern. Lively is also known for her roles in the Sisterhood of the Traveling Pants films and The CW TV series Gossip Girl, in which she played the iconic character Serena Van Der Woodsen for six seasons from 2007 until 2012.

Lively's current film The Rhythm Section sounds like an action-packed film set for 2019, but first, the actor needs time to fully heal her hand. Once Lively heals and can get back to filming, this movie seems like it'll be a real must-see when it is released.